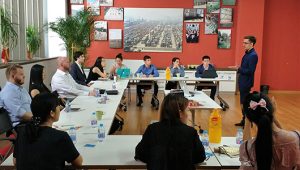 In the context of the bilateral science and technology cooperation of the Swiss State Secretariat for Education, Research and Innovation (SERI) with Asia, for which ETH Zurich acts as Leading House, Max Weber from the ZHAW Center for Asia Business has been asked to promote young Swiss entrepreneurs in Southeast Asia. He is developing a custom training programme to help Swiss entrepreneurs convince local investors to support their projects. In the following interview, Max Weber talks about his programme and its special characteristics.

The project is a pilot programme. Initially, that is from 2018 to 2020, its focus will be on Indonesia, where Switzerland already has close ties in the form of commercial and academic partnerships. Some 150 Swiss companies are already based in Indonesia. The new programme aims to support innovative business ideas in the technology sector (financial services, tourism, energy services, and e-commerce), but it will also be open to those with projects in the industrial and agricultural sectors. If successful, the programme will be extended to include other Southeast Asian countries.

Max Weber, how did this project come about and what is so special about it?
I have lived in South-East Asia, including Indonesia, for over 25 years. Accordingly, I have a large network that consists of local business people, official Swiss representatives, and the Indonesian government. Based on this, ETH Zurich asked us if we wanted to take on this project. Then, within six months, I had to prepare a proposal that would appeal to ETH Zurich as well as the SERI and the local partners. The project aims to help young Swiss entrepreneurs to implement their innovative ideas in Asia, but it will also facilitate the collaboration with Indonesian entrepreneurs. In concrete terms, it consists of several steps: First, suitable entrepreneurs must be found in Switzerland. Next, we will design a training programme to prepare them adequately for pitch rounds with local investors, using a simulation-based training approach: Participants’ business ideas will constantly be reviewed and discussed critically by an „investor board“ in order to identify deficits that can then be addressed. The project will also include a local investor network to bring together programme participants and local investors.

How much effort is involved in designing and implementing such a training programme for entrepreneurs?
If one compares the 18 months of preparatory work with the six months in which the actual training will be conducted, the effort is considerable. However, we like to think long term. This dynamic way of imparting knowledge is generally very demanding. You have to adapt the procedure constantly, and you never know the result in advance. Moreover, such projects always mean a clash of cultures as, initially, we will work in Switzerland and Indonesia simultaneously. This will be possible through video sessions. Experience has shown that it would take about two weeks for both sides to work well together. Since we do not have that time, we will also include a cultural assimilation module. By raising a project team’s awareness of cultural differences, such issues will come to light more quickly. The sooner the teams recognize them, the sooner strategies can be developed to avoid them.

What, specifically, gave you the idea for this project?
The starting point was the realization that the success rate in launching an entrepreneurial idea in Asia is only about 3%; in other words, 97% of all business plans receive no initial funding. This rate is too low, and we wanted to change that. At the same time, we want to show that even in the event of a negative decision, i.e., even if entrepreneurs do not receive any initial funding for their business idea, there can be a valuable learning effect. Training should not be time lost but should always have a learning effect for participants.

How else can you measure the success of such a programme?
As already mentioned, our programme is designed for the long term. At the same time, we will naturally have the number of new startups on site and the number of new jobs created, including qualitative measures. Promising is also the fact that our project has recently been approved by the Asian Development Bank (ADB) for support, which will be both conceptual and technical. This cooperation will be invaluable in terms of local contacts to the private and public sectors in Indonesia.

What activities and results in your project we can expect next?
Our project will run from March 2018 to early 2020. In 2018, we will design the training programme, and the first training sessions will take place at the beginning of 2019. Finally, the pitch rounds with investors in Indonesia will take place in the last quarter of 2019. The plan is to complete the project by the first quarter of 2020 and perhaps even to plan the continuation of the project, which we very much hope will be possible.

Personal Information:
Max Weber is a senior lecturer in International Business who worked at ZHAW for the past five years as a member of the International Management Institute’s Center for Asia Business. After studying in the United States, where he earned MBAs in both finance and marketing, Max Weber spent over 25 years in Southeast Asia working as a general manager for a U.S. company, and as a management consultant. He has also taught in various Executive MBA programmes in London, Sydney, and Singapore.

Max Weber is available for further information on this project.