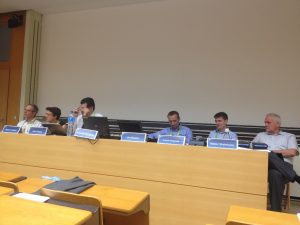 On the 26th of June 2016 – the day after the BREXIT referendum – the Energy Policy Analysis Group (EPAG) of the ZHAW School of Management and Law as a member of SCCER CREST, hosted a policy session on “The Electricity Market in 2025”. The policy session was part of the official programme of the 22nd Annual Conference of the European Association of Environmental and Resource Economists (EAERE), organized by ETH Zurich attended by more than 750 attendees.

The policy session brought together experts from various backgrounds ranging from politics, industry, regulatory bodies, as well as academia. Six panellists looked into their crystal balls to provide the audience with their view on the economic, technical, regulatory and political challenges of the Swiss and European electricity markets in the next decade. The policy session was kicked off with short presentations that outlined the different perspectives of Swiss, European and international stakeholders on the electricity market in 2025.

Dr. Walter Steinmann, Director of the Swiss Federal Office of Energy, sees an increasingly important role for the Transmission System Operators (TSO). Given the TSO’s natural monopoly, this development requires a strong regulator and government setting out clear rules. He formulated his concerns about the increasing number of court proceedings in relation to the liberalisation of the electricity market. Given that courts usually do not possess the necessary expertise, their decisions may not lead to an efficient outcome and optimal design of the electricity market.

Dr. Urs Meister, Director Regulation Management at BKW, one of the four big utilities in Switzerland, explained that electricity prices on the Swiss wholesale market have decreased substantially since 2012. In his view, these developments are mainly due to decreasing fossil fuel and CO2 prices. He assumed that the business of his utility will be more infrastructure and service oriented in 10 years’ time.

Dr. Frank Krysiak, Professor at the University of Basel and Head of SCCER CREST, presented three different possible scenarios for the electricity market in 2025: The “non-market” scenario would rely on supply and infrastructure decisions made by policy makers and renewables would be financed by high surcharges. The “smart market” scenario would be based on a liberalised and more decentralised market where system costs would be allocated based on new mechanisms. In this scenario, a higher share of renewables and storage would be observed, as well as a role for demand flexibility rather than efficiency. In the “competitive market” scenario supply would be provided by only a few renewable technologies and demand would increase substantially given that retail prices would move towards a flat rate system similar to the telecommunication market. The last scenario in particular induced a controversial discussion among panel members.

Nick Frydas, Manager of the Resources Planning Section at European Network of Transmission System Operators for Electricity (ENTSO-E), provided potential details for the “smart market” scenario introduced by Frank Krysiak. In his view an energy-only market with prices reflecting actual system scarcities needs to be the aim of regulators and policy makers. In addition, hedging products which transpose price spikes into investable revenue streams would provide the necessary investment incentives.

Marion Labatut, Coordinator of Wholesale Market Issues at Eurelectric, mentioned that the EU Commission’s legislative proposals on the electricity market design are due by the end of this year. She expects that they will give insights on which of the discussed scenarios (e.g. energy only or capacity market) may become more likely in the EU. In the view of Eurelectric European security of supply may only be achieved by some form of capacity remuneration mechanism. On this point Eurelectric and ENTSO-e views differ.

Finally, Ass. Prof. Dr. Iain MacGill from the Centre for Energy and Environmental Markets (CEEM) at UNSW Australia provided some lessons learnt on the other side of the world. He highlighted that in contrast to expectations some of the most competitive retail market regions in Australia – Victoria and South Australia – have the highest residential electricity bills and that the real retail competition arose from PV panels becoming competitive rather than from switching of retailers.

Following on from those introductory comments a panel discussion was moderated by Dr. Christian Schaffner, Director of the Energy Science Center of the ETH Zurich. He wanted to know what works well and what doesn’t in today’s electricity market. All speakers agreed that the market works well for dispatching electricity, however they noted that incentives for investments are missing given the low electricity prices. All agreed that changes of the current design are necessary to provide those incentives, however the views differ with regard to the path to take and how the “smart market” will look like. The policy session concluded with some questions from the audience.