Things we learned at the 9th SDN workshop

What’s a better way to kick-start the 2018’s blog post series than with SDN topics? 🙂 Therefore in order to keep the tradition of regular blog posts dedicated to the SDN workshop, we have prepared a thorough reflection of the talks and demonstrations featuring the 9th workshop held on the 4th of December 2017 in the premises of IBM Research, Zurich, and organized by the ICCLab and SWITCH. 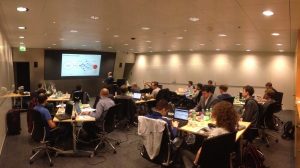 END_OF_DOCUMENT_TOKEN_TO_BE_REPLACED

A report on the 8th Swiss SDN workshop at last!

Following the rhythm, we held the 8th Swiss SDN workshop/meetup in mid-June this year. It was a great a pleasure and experience to get the networkers together for a full-day event hosted at ETH Zurich. We learnt about new solutions and implementations from the talks/demos given by our colleagues from the academia and the private sector.

END_OF_DOCUMENT_TOKEN_TO_BE_REPLACED

The ICCLab T-Nova members are back from the 3rd and final project review meeting that was held on March 16th in Athens, Greece. Couple of days before that, we were enrolled in the preparation and setup of the final demos at N.C.S.R. Demokritos premises.

Several demonstrations were shown to the reviewers during the demo session in order to point out the achievements in the last year of the project. Moreover a poster session was held in parallel to stress the contributions in terms of conference and journal papers published within the project’s scope, Figure 1.

END_OF_DOCUMENT_TOKEN_TO_BE_REPLACED

After the latest work on Heat support for Netfloc service chaining, the SDN team used the summer’s quiet month of August to update some of the features in Netfloc and Netflogi.

A new extension to the API set is the functionality to retrieve the current service chains created in Netfloc. This has been made possible with the improvement of the Netfloc service yang definition and the persistent data record from Netfloc into the MD-SAL repository. Using this APIs the providers of a Netfloc service can now issue RPC requests to the datastore inventory and retrieve the current data and state of the service. This improves the resilience by keeping the network state and the chain aligned and consistent in case of Netfloc restart.

END_OF_DOCUMENT_TOKEN_TO_BE_REPLACED

Stitching virtual network functions (VNFs) together in a so called Network (Service) Function Chain is not a novelty any longer. Described in our previous post, the SDN team had already worked on creating SFC library support for OpenStack in our SDK for SDN. In this blog we describe the advances made towards integrating Netfloc services with both, Heat Orchestration Template (HoT) – based orchestrators and Network Function Virtualization (NFV) – based orchestrators.

To do so, and also to make a step towards automatizing the SFC management with Netfloc, we created a Heat plugin for Netfoc. It is based on the Netfloc API library for managing network service chains in OpenStack clouds. The parameters required to create the service include: OpenDaylight credentials, the IP and the port of the Netfloc node, along with the Neutron port IDs of the VNF instances.

For a network service operator, applying the plugin makes it very simple to deploy multiple chains in OpenStack cloud infrastructure. An example includes a packet inspection VNF that determines if the traffic is video and the type of the video service, and sends it further to a virtual transcoding unit VNF for quality adjustment. If data traffic is detected, packets are steered to a virtual security appliance acting as a virtual firewall, which sends them further to a virtual proxy VNF and a deep packet inspection VNF.

END_OF_DOCUMENT_TOKEN_TO_BE_REPLACED

Recently, at EUCNC’16, the ZHAW SESAME team demonstrated the work of combining SESAME concepts through the use of Hurtle, our orchestration framework, and Netfloc, our SDK for datacenter network programming. The demonstration was also a joint demonstration between SESAME and the 5GPPP COHERENT project.

It was a demonstration that bridges the gap between the telco and cloud world by creating a network service based on the services and technologies coming from both projects.

END_OF_DOCUMENT_TOKEN_TO_BE_REPLACED

After 7 months, Service Engineering and SWITCH are back with the regular Swiss SDN workshops, this time held on 16th of June at the ZHAW premises in Winterthur. For the 6th time, the Software Defined Networking (SDN) community from Switzerland and abroad (represented by the industry and the academia), embarked on a joint SDN-NFV full-day journey to discuss SDN, present the best practices and prototypes and share the know-how and some demonstrations of their recent research activities. As a novelty this time, the SDN workshop/meetup was collocated with the Open Cloud Day, allowing for broader attendance from participants in both events. Regular attendees and new fellows could be spot on site engaged in interesting discussions. You can find the through report of the event here from our collaborator SWITCH and i leave you below the complete list of the SDN track. The complete presentations repository could be found here. Enjoy and see you in the next events!

END_OF_DOCUMENT_TOKEN_TO_BE_REPLACED

In the past year i was working on a graphical interface for Netfloc – the SDK for SDN developed in the SDN initiative. Just to remind you, the aim of Netflogi is to: (1) make the SDK itself easy to use and (2) expose the Netfloc APIs and functional features to the network application developers and datacenter service providers.

With the initial version of Netflogi, the user was able to create a Service Function Chain only by using Neutron port IDs. This was done by choosing the number and the order of the Neutron ports used in the Chain. The current version of Netflogi allows to create Virtual Network Functions (VNFs) and a Service Chain using those VNFs. This blog post describes the updated functionalities of Netflogi that take part of the development work i did as part of my final exam, called IPA in Switzerland.

The novel functionality added in Netflogi is the VNF management (create & delete). Creating VNF includes choosing a name, a description of the functionality and assigning ingress and egress ports. Once the VNF is successfully created, it appears automatically in the list of the existing VNFs. The VNFs can be used in different services offered by Netfloc. Currently Service Function Chaining is fully implemented and can be done by combining one or more VNFs. The VNFs can be deleted, as well as the Service Chains. Help page and messaging system for the performed actions is also included in this version.

END_OF_DOCUMENT_TOKEN_TO_BE_REPLACED

NETwork FLOws for Clouds (Netfloc) is an open source SDK for datacenter network programming developed in the ICCLab SDN initiative. It is comprised of set of tools and libraries that interoperate with the OpenDaylight controller. Netfloc exposes REST API abstractions and Java interfaces for network programmers to enable optimal integration in cloud datacenters and fully SDN-enabled end-to-end management of OpenFlow enabled switches.