The world of research is a complex one which despite myths does not exist in isolation. And publishing is another world within this world which is mythical even to most researchers. Open access models are being widely discussed, but there are trends and necessities going beyond and evaluating other, more consequent options. This post reports on the trends and options with the aim of becoming a text piece rich enough of information to initiate fruitful discussions on how we, as wider research community around service, cloud, distributed computing, should publish our work, our results and our interactions around them.

Many creatures live in the world of publishing. Well-known ones are authors, reviewers, editors and commercial publishers. But there are continents on which other species are endemic: e-print servers and overlay journals. Apparently through a tectonic shift these continents are moving faster and grow in size and biodiversity.

Parting with the notion of mythical worlds, here are a couple of pointers. E-print servers store electronic documents and make them available without charge and without restriction for download. Before storing, they need to be accepted first which is one of the criteria for differentiation, as is the domain of research, and as is the nature of the document. E-prints can be preprints, which are non-refereed or reviewed and accepted works, as well as postprints, secondary copies after publication. Among the e-print servers are: arXiv for physics, maths, astronomy, computer science and a few other quantitative sciences; the Cryptology ePrint Archive for cryptographic work, viXra which corresponds to arXiv except for the initial basic quality and suitability gate, HAL and several others for domains not including computer science (e.g. BioRxiv).

Storing a preprint, and sometimes a postprint, is not always permitted by conventional publication venues, in particular commercial ones. The policies can be looked up in RoMEO, but also in countless personal and institutional experience descriptions. In computer science, there are of course positive examples, too (as well as dedicated sites for arbitrary proceedings), which take a pragmatic approach without much legalese about which formatting is allowed under which circumstances.

Nevertheless, there has been a recent rise in overlay journals which foster a preprint-first approach at zero cost for authors and readers. This may be an indirect response at issues with conventional pay-to-publish open access publishers of which many have been identified as unethical and predatory, although blacklisting has become a tedious matter to the point that it is not being done anymore.

Overlay journals function as follows. A preprint is uploaded to an e-print archive unreviewed but in readable quality, ensuring early dissemination of results. Iterative improvements may be applied based on feedback and reviews. Upon reaching the self-determined quality and satisfaction line, the work is then submitted to one of these journals, and eventually after acceptance replaced with the accepted and often especially formatted version, after which further iterations are possible again, for instance errata, without affecting the previously accepted version. An increasing number of tools is available to lower the barrier for new journals, for instance Épisciences, Open Journal Systems and Scholastica.

Computer science beyond the theoretic fields is notably absent from the overlay journals which mirrors that the field in general is still more conference-oriented. As for our work around service and cloud computing the cs.DC category within arXiv CoRR is among the most appropriate ones, we performed an informal and small-scale poll with corresponding authors of fifteen recent uploads spanning the course of one week. The results are clearly not statistically significant, but indicate certain preferences within the sample size. The first question asked whether the authors deposited an untargeted and unreviewed preprint, a preprint targeting a specific venue (not distinguishing between planning to do so, actually being in the process of doing so, or already having received acceptance), or a postprint of an already published work. Four of the works have been cross-posted to cs.DC with another primary category, and three works have been indicated as related to an accepted or published status, but more could be in this category without having marked it yet. All fifteen e-prints were first-version [v1] uploads. Seven authors replied back until now; we’ll give updated statistics as comment to this post. The result is quite interesting. There is a clear dominance of preprints associated to certain traditional publication venue, i.e. journal, conference, workshop or symposium with acceptance of public preprints. 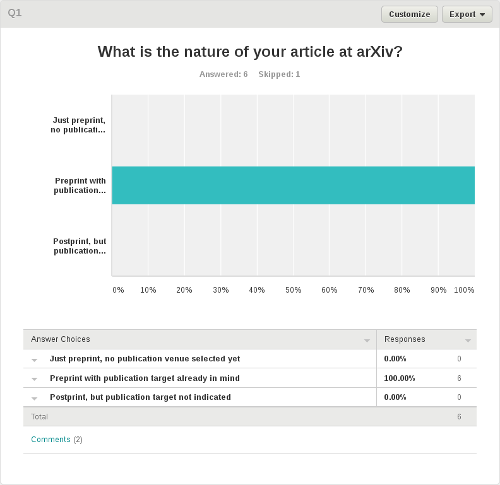 The second question was more direct in asking about a potential interest of an overlay journal for this category. Surprisingly, the yes answers are again dominant. 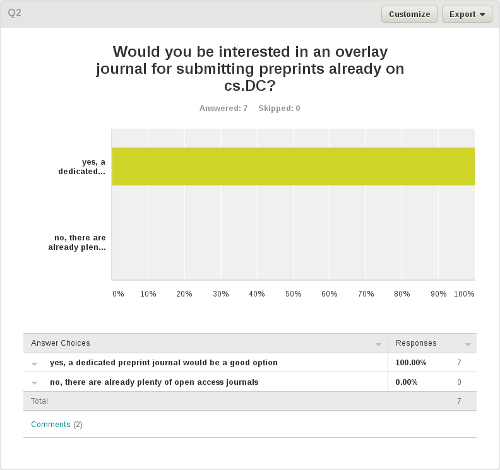 We will spend the next time discussing with our peers within the related research communities if this result represents the opinion of most researchers and, most importantly, if there would also be an affirmation of such an activity by those who would have to perform the work in terms of editors and reviewers. Likewise, we’re going to assess the preprint-first policies of various conferences. When just open access is not enough for our needs anymore, we are well advised to have solutions available.