Brief report on the ICDCS’18 conference 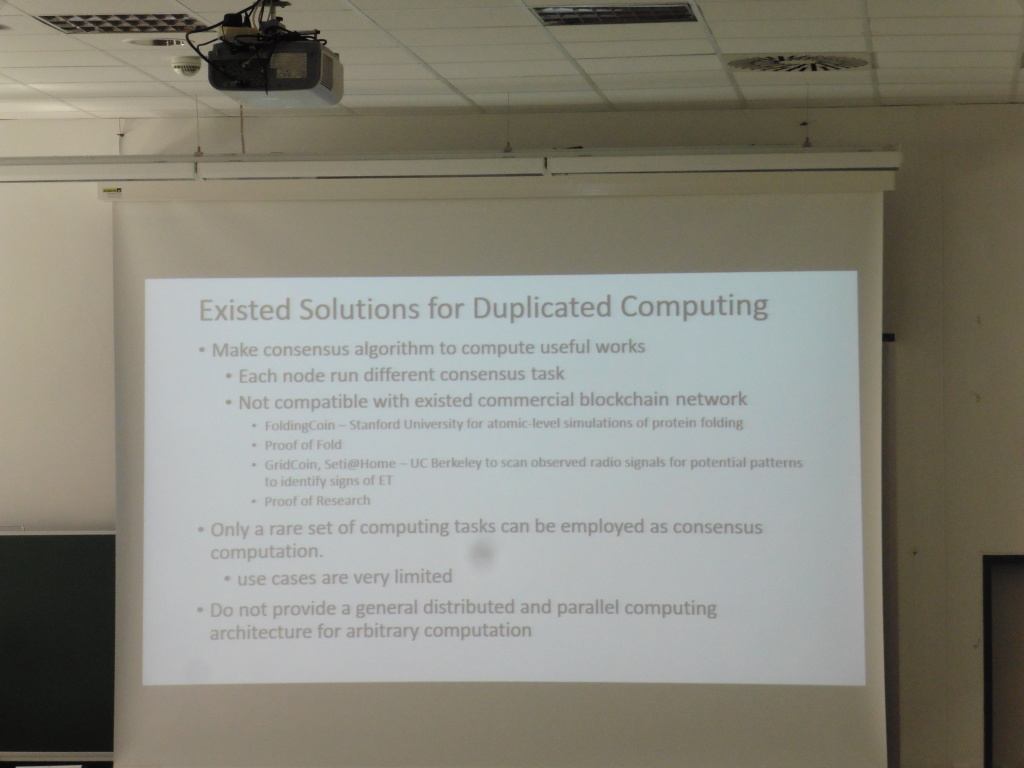 The 38th IEEE International Conference on Distributed Computing Systems (ICDCS’18) took place from July 2 – 5, 2018, in Vienna, Austria. This blog post briefly summarises from our view as participating researchers from the Service Prototyping Lab some key aspects on distributed applications and general take-away inspirations of the well-established conference.

The first day was dedicated to tutorials and workshops. From our lab, we ran a full-day tutorial on prototyping distributed software applications based on cloud functions. Participants in the tutorial learned how to compare and use Function-as-a-Service (FaaS) offerings. The tutorial was divided into two main parts, development and operations of functions, each of which was sub-divided into mundane basics, hands-on experience and ongoing research. Around 15 participants showed up in total. They signed up on a WebAction-enabled function running on OpenWhisk, and further used SSH accounts on an SPLab-provided shared server as well as a trial account on the APPUiO Swiss Container Platform to install and use FaaS-related software, including some of our research prototypes. Several follow-up discussions were triggered with the participants, and only one small glitch (Snafu’s refusal to load, ironically, Python functions, which was apparently not noticed by anybody and is already fixed) made it into the show. 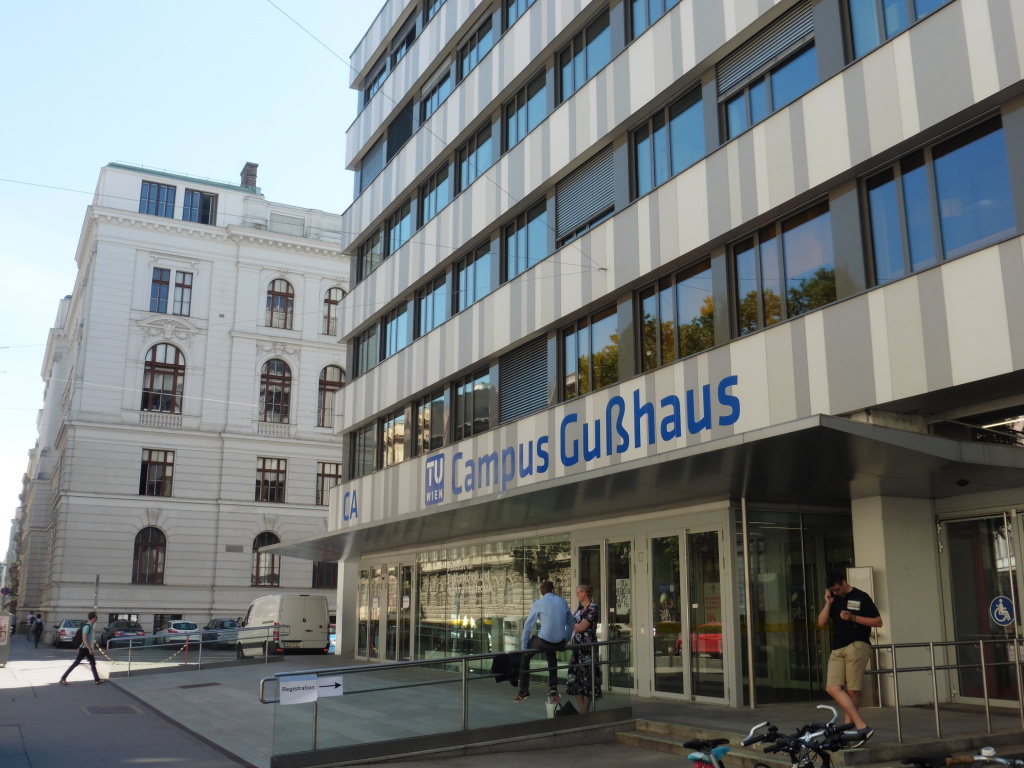 The official conference opening happened on the second day. The location mode of the conference (North America, Asia, North America, Europe in turns) was explained and the choice of Vienna as location for the second time was mentioned by the general chair, A Min Tjoa. Greetings were delivered by the dean of the Faculty of Computer Science where among 5000 students several will become the next generation of researchers. Peter Pietzuch, the program chair, mentioned statistics about the review process. He was assisted by two vice chairs per program area, including the Blue Sky Thinking sessions where senior members of the community presented invited papers. In total, 333 reviewers went through 378 submissions and chose 78, an acceptance rate of 20.6%, for presentation at the conference. The submissions came from 51 countries, predominantly USA and China. Interestingly, Asian papers had a lower relative acceptance score compared to North American and European papers. The most popular topics were cloud computing/data centres and security/trust in distributed systems. The opening finished with the announcement of a best student paper award and the best paper award. 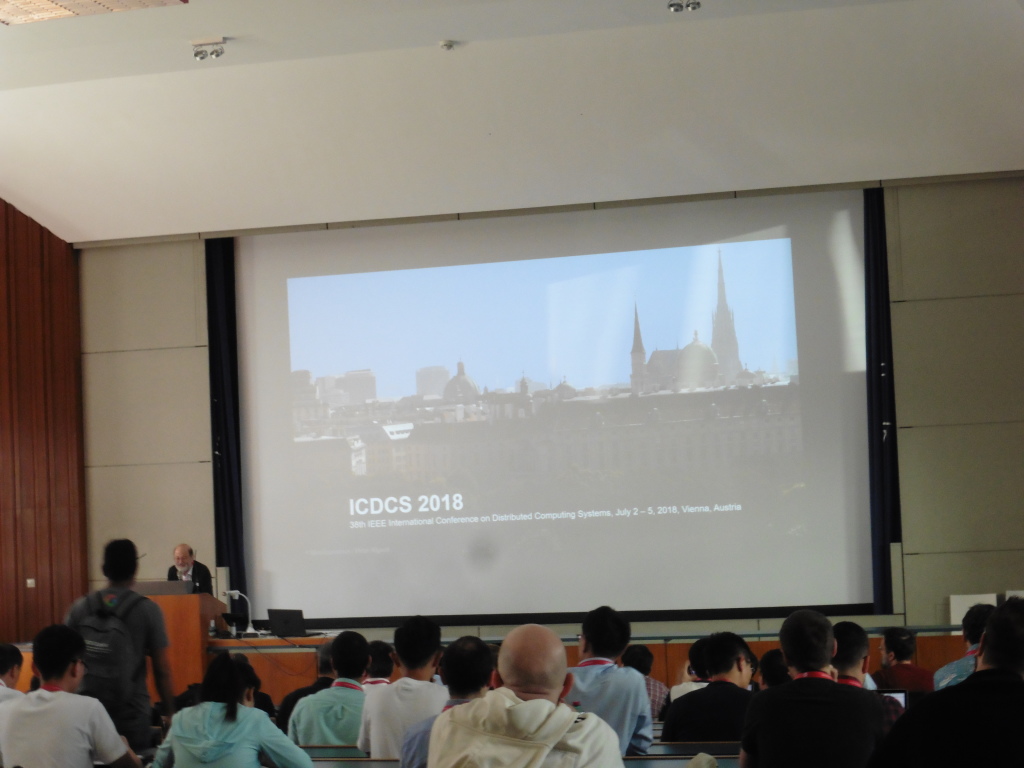 The keynote was given by Manfred Hauswirth, CEO of Fraunhofer FOKUS who graduated from TU Wien and also spent some time in Switzerland at EPFL, going through several computer science disciplines. The need to conduct trans-disciplinary research, to tear down walls between disciplines, and to speak the same language (e.g. by involving database researchers when most submissions at ICDCS are about data according to the obligatory tag cloud) were consequently in the centre of his excellent talk. On the research side, due to all possible architectures having been researched already, the challenge is now going to the provisioning of edge infrastructures for more powerful and networked applications, and the achievement of “one (singular) infrastructure that can be adjusted to the required architecture based on the application requirements without re-implementation”. 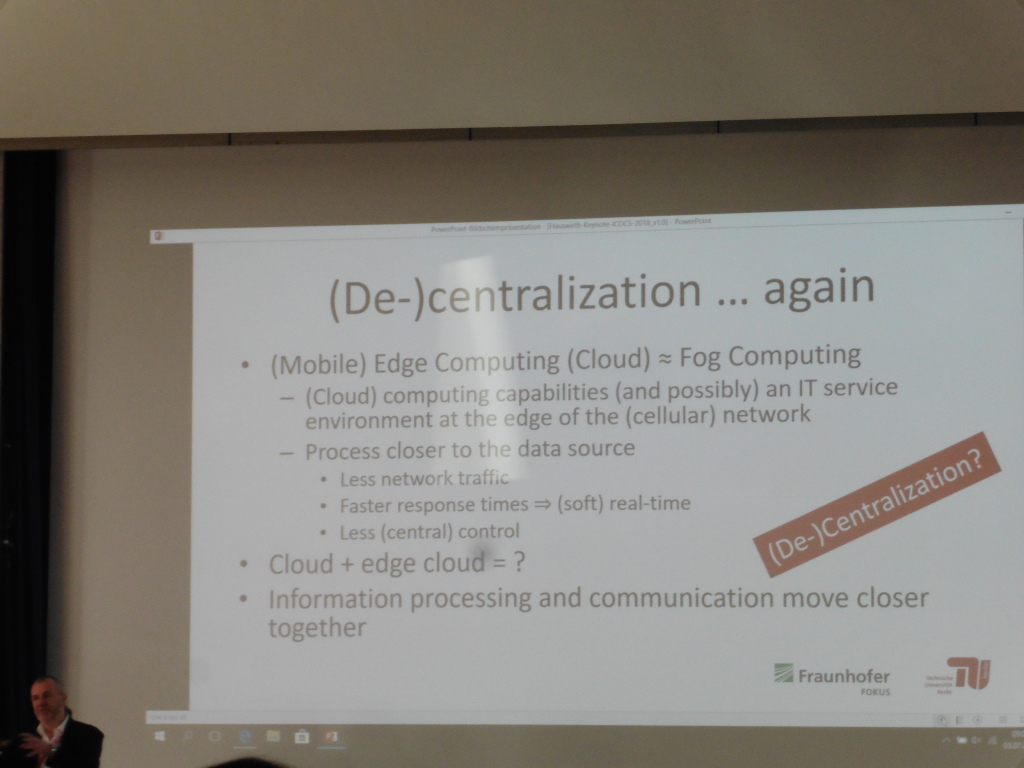 One of the forward-looking vision sessions of the second day covered the topic of Internet of Things from various angles, followed by a brief panel discussion. Related to the intersection of informatics and society, which was presented as important topic for the Faculty hosting the event, the Internet of Connected Battlethings was presented from a military research perspective with the aim of reducing human toll in war scenarios. Another relation appeared in a talk on Internet of Things interoperability, while one speaker had obvious trouble connecting the projector to the notebook. Presumably, computer science research will benefit from a stronger eat-your-own-dogfood mentality which emphasises evidence-based research methods and fully evaluated results.

The topic of blockchain research was mentioned in the same session as well as in several other talks during the conference. Most panelists regarded it as too expensive for being a general-purpose platform, not dissimilar from homomorphic encryption, but acknowledged the existence of niche application areas. One example was given on improving ride-sharing applications where cars and mobile devices would connect to blockchains to negotiate series of short trips, which are microbilled, to achieve a longer complex trip. 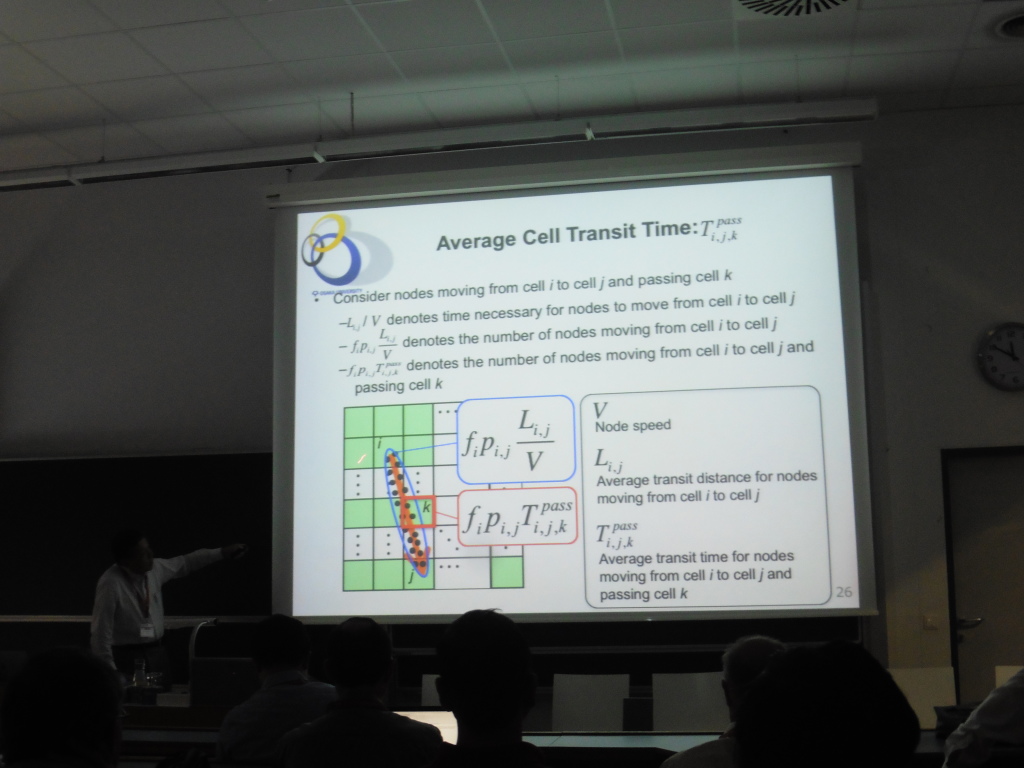 In the breaks during the day, interesting discussions emerged in an ad-hoc manner. Rolling reviews were discussed, as were conference support by professional organisations, university/institute structures, funding support and general advantages and disadvantages in some academic systems, including the universities of applied sciences system in Switzerland. The reason why edge computing does not take off in some countries was revealed, as the need for edge is proportional to the country size. A poster session, with one live demo added on the topic of “serverless” (in the original sense!) device synchronisation, and a reception concluded the second day.

Opening with a Blue Sky Thinking session, in which each speaker had 10+2 minutes to present his or her view, the topics ranged from “duplicate computing” infrastructures to human participation in smart cities and digitised neighbourhoods and resilient power grid as example of an essential utility infrastructure whose design can be improved by learning from resilient cloud infrastructures. Interestingly, while computer engineering is typically influenced by other sciences and domains (e.g. bio-inspired designs, six-sigma quality, testing in aviation), the increasing maturity of the field enables such reverse inspirations which, along with higher digitalisation of society in general, will dramatically increase the ethics and responsibility requirements and, therefore, the design of computer engineering curriculums already from the bachelor level, something many universities are currently unprepared for. If a typical cloud experiment fails, just discard the resources and start over with just some cents or Rappen lost (cattle notion); but if it is part of a cyber-physical system which affects lives and the world with damages at the high end, better perform all possible checks beforehand and do not assume anything will survive a reinstantiation (ineluctable revival of the pet notion in Bill Baker or Randy Bias terms). 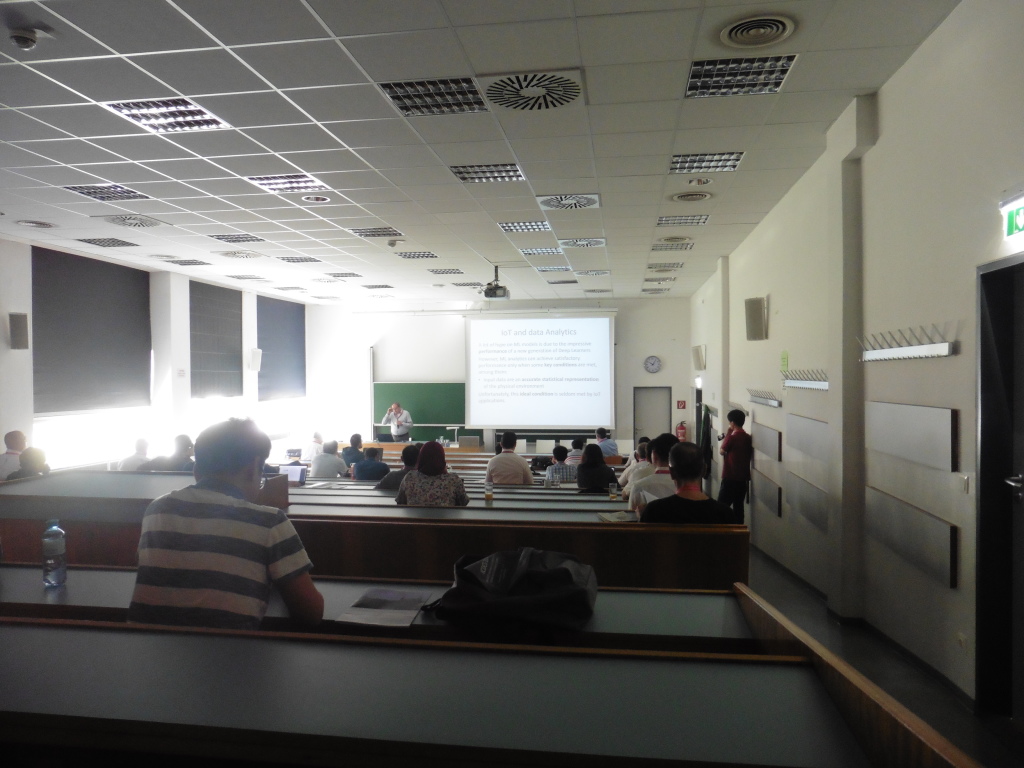 In the subsequent sessions, a recurring question was about the core research questions apart from “cyclic standard questions” such as: is the system secure, does it perform, does it preserve privacy, will it be easy to use. Few such questions could be answered when the question related to a large interdisciplinary effort. Finally, the third day ended with a conference dinner in Vienna City Hall which was used to thank not only the best (student) paper authors and the best (attendee-nominated) poster presentation, but also longstanding members of the community for technical achievements. Reflecting upon what is said in such occasions, it becomes apparent that with many initial people still around and active, distributed computing is both an ancient computer science topic and a still very young and direction-changing topic in the overall timeline of modern research.

Due to teaching obligations in Switzerland, more specifically defenses of bachelor theses, we could unfortunately not participate in the final conference day in Austria. Still, from the three packed days which were unaffected but such duties, it can be concluded that ICDCS is a properly run and suitably sized distributed computing and systems conference in which relevant questions concerning future infrastructures as well as application and societal effects are being discussed in sufficient detail.

Setting up container based Openstack with OVN networking