As with the first day of the summit (see recap), the second day started with a keynote. In this case, the focus was on multicloud solutions and how Openstack can perform in this context. A few interesting points stood out from the keynote for us. First up – to emphasize how Openstack is moving – there was an announcement that China Telecom is to deploy an enormous 2000000 (2 million) square meters of Openstack in data centres (see pic). There were a couple of interesting demos, the first of which focused on the system that is used for CI/CD of Openstack itself – this system has quite high requirements and is distributed over a set of heterogeneous resources provided by disparate entities who wish to support Openstack. They demonstrated how easy it is to add a new set of Openstack resources to their platform and how quickly new test workload appears on the new resources. The second interesting demo was of the Openstack Omni project which used the horizon dashboard and openstack APIs to control AWS – it was somehow pitched as one API to rule them all, which is perhaps a bit optimistic, but it reflects the fact that the Openstack API is maturing and more and more applications are being developed against it; EC2 is no longer the only important API in town! Finally, there was a presentation by Crowdstar which highlighted the benefits of Ironic for certain workloads – 60% cost reduction and 40ms reduction in latency – and particularly how it can be used very effectively in conjunction with containers. 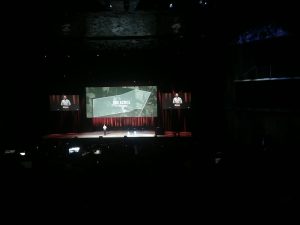 There was quite some interest in big data and HPC type of applications – the talks on GPU virtualization and Tensorflow were very well attended, but there is still a lot of work to be done in both these realms. The GPU virtualization work was described in the context of the Nomad project which is attempting to manage heterogeneous compute resources in Openstack; however, the vision they offer is still only at the initial stages. The Tensorflow work compared Magnum and Sahara for deploying a Tensorflow workload – Magnum was selected as the better option, somewhat due to its greater support, but there are still issues with using this as a framework for this type of work.

On a related note there was an interesting talk on unikernels and how they relate to Openstack. The guys from the MIKELANGELO project have developed solutions which enable applications to be packaged into unikernels and executed from image stores. Such solutions can be much more efficient than VM or even container based solutions – they gave an example of a VM image consuming 2GB while the equivalent unikernel consumed 56MB. However, their solution was not really integrated with Openstack and there is still a lot of work to do to make this happen.

At another session, we learnt of the developing ARM Openstack ecosystem: there are ARM Openstack distributions already available and key issues relating to ARM Openstack compute functions have been solved (mostly relating to UEFI and ACPI): the Linaro team is working on expanding the ARM Guest OS support for different Linux distributions. This is a very interesting area which will surely grow as some organizations want to reduce their dependence on Intel and perhaps have some gains in energy efficiency.

We did spend some of the day going around talking to people, so it was not all spent sitting in the sessions – we had great fun with the cloudbase guys who showed us their very cool holoens demo.

And now off to the Rackspace party!