As announced in our last blogpost about the official release of Cyclops 2.0, which is finally out and is adding new features.

The collector that is being released today is the Ceilometer Usage Collector. This collector enables Cyclops 2.0 to provide full rating, charging and billing support to an OpenStack deployment using the data provided by Ceilometer.

In addition to the announced features, our team has pushed forward in the development of the new Usage Collectors. The Usage Collectors are the entry point of data for the Framework itself. They consist of isolated microservices that gather data from a specific provider and distributes it via RabbitMQ to the UDR microservice. 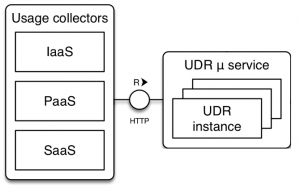 The Ceilometer Usage collector is in contact with the Ceilometer Service from the OpenStack deployment, and periodically asks for Usage Data. These requests are authenticated via Keystone credentials that have to be provided in a configuration file. The used credentials must have the rights to use the ceilometer, which in our case were in the “admin” tenant.

Every time the collector gets information from the Ceilometer, it sends it to the RabbitMQ queue where UDR microservice is subscribed. This data will be first stored into InfluxDB until the UDR Generation Command is sent to the UDR.

Once the UDR command is received, the microservice will compute the usage that every meter supposes and will store it as a unified UDR which the rest of microservices in Cyclops will use. There are three different kind of meters in Ceilometer:

Example of cumulative meter usage stored into the database.

New code features and a video of the full workflow will be released soon.

Follow us @rcb_cyclops to get the latest news from the Cyclops Team or write to us at icclab-rcb-cyclops[at]dornbirn.zhaw.ch if you have questions.