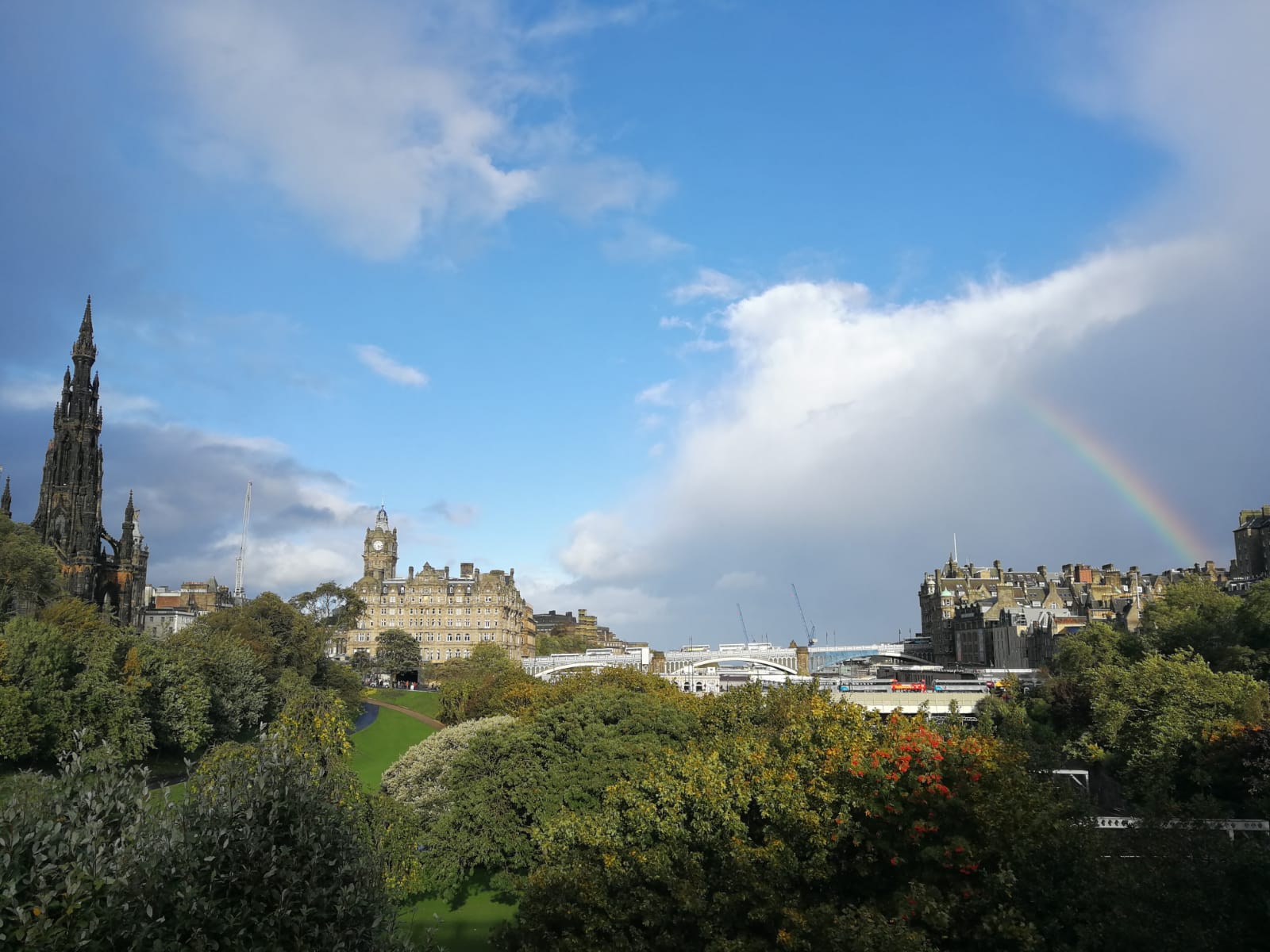 The weather in Scotland is funny (and by funny I don’t mean “funny haha”, I mean “funny peculiar”). The climate on the British Isles, especially this far north, is not really a reason to laugh. Don’t count your chickens before they’re hatched if the sun is out after six days of overcast weather, because within the next 30 minutes it will start to rain again, I promise you. But this time it won’t be a soft drizzle as it was before. No, water will fall from the sky and it won’t follow the laws of gravity, because a strong wind will pick up, so that it will rain straight into your face. Naïve as I was, I brought an umbrella to Scotland – I had to learn the hard way that they are useless.

Scottish people, of course, are immune to this type of weather – “dreich” as they call it, which means something like miserable weather (I’m sure that is an understatement). Even on the coldest winter days, when I would to go outside so wrapped up you could only see my eyes peeking out under layers of scarves, you would see Scots walking through Princes Street Gardens only wearing a t-shirt (and trousers). And evidently they were not cold! They were enjoying themselves as if it was a lovely sunny spring day (which, for the record, it wasn’t).

During the four months I spent in Edinburgh because of my exchange semester in 2018, I was overwhelmed by the kindness of random Scottish strangers. I, who was used to the constant grumpiness of people in the streets of Zurich, was more than confused when a woman offered out of the blue to take a picture of us when she saw we were struggling to take a selfie, or when the cashier asked me how I was and was genuinely interested in my state of mind. People on the street were smiling, even though it was raining cats and dogs. This confused me as well, because rain would be a welcome topic for Swiss people to complain about, or rather a reason to complain more than they already do.

To my mind, the explanation for Swiss people being very reserved and not exactly cheerful (I’m obviously generalising) was the weather. It’s quite challenging, I thought, to be in a good mood if the sky is grey, it’s raining and you spend two weeks without seeing the sun. Thankfully, my stay in Scotland proved me wrong. People there are happy DESPITE the weather.

So my theory purports that Scotland’s weather and the mood of its people are in in reverse proportion to each other (but I must confess this theory doesn’t work out very well, because it doesn’t mean that Scots are annoyed when the sun is shining. No, Scottish people are almost ALWAYS happy). To cut a long story short, what I’m trying to say is that I admire the Scottish attitude very much indeed. It’s a characteristic that I’m trying to carry over and make popular in Switzerland. Obviously, the weather influences our mood and we are automatically happier when the sun is shining, but at the same time, the weather isn’t something we can influence; we just have to accept it as it is. So I am pleading that we should always try to make the best out of it, based on the model of the Scots. Just because it’s raining, it doesn’t mean it’s a bad day. I’ll give you an inside tip: call rain “liquid sunshine”, as the Scots do.

The BA in Applied Languages at the IUED Institute of Translation and Interpretation turns language enthusiasts into language and communication professionals who can move effortlessly between languages, cultures and subjects. Many of our graduates go on to find positions in multilingual project, event or information management, in the language industry or in technical communication at the interface between humans and technology.