Setting up container based Openstack with OVN networking

OVN is a relatively new networking technology which provides a powerful and flexible software implementation of standard networking functionalities such as switches, routers, firewalls, etc. Importantly, OVN is distributed in the sense that the aforementioned network entities can be realized over a distributed set of compute/networking resources. OVN is tightly coupled with OVS, essentially being a layer of abstraction which sits above a set of OVS switches and realizes the above networking components across these switches in a distributed manner.

A number of cloud computing platforms and more general compute resource management frameworks are working on OVN support, including oVirt, Openstack, Kubernetes and Openshift – progress on this front is quite advanced. Interestingly and importantly, one dimension of the OVN vision is that it can act as a common networking substrate which could facilitate integration of more than one of the above systems, although the realization of that vision remains future work.

In the context of our work on developing an edge computing testbed, we set up a modest Openstack cluster, to emulate functionality deployed within an Enterprise Data Centre with OVN providing network capabilities to the cluster. This blog post provides a brief overview of the system architecture and notes some issues we had getting it up and running.

As our system is not a production system, providing High Availability (HA) support was not one of the requirements; consequently, it was not necessary to consider HA OVN mode. As such, it was natural to host the OVN control services, including the Northbound and Southbound DBs and the Northbound daemon (ovn-northd) on the Openstack controller node. As this is the node through which external traffic goes, we also needed to run an external facing OVS on this node which required its own OVN controller and local OVS database. Further, as this OVS chassis is intended for external traffic, it needed to be configured with ‘enable-chassis-as-gw‘.

We configured our system to use DHCP provided by OVN; consequently the neutron DHCP agent was no longer necessary, we removed this process from our controller node. Similarly, L3 routing was done within OVN meaning that the neutron L3 agent was no longer necessary. Openstack metadata support is implemented differently when OVN is used: instead of having a single metadata process running on a controller serving all metadata requests, the metadata service is deployed on each node and the OVS switch on each node routes requests to 169.254.169.254 to the local metadata agent; this then queries the nova metadata service to obtain the metadata for the specific VM.

The services deployed on the controller and compute nodes are shown in Figure 1 below.

Figure 1: Neutron containers with and without OVN

We used Kolla to deploy the system. Kolla does not currently have full support for OVN; however specific Kolla containers for OVN have been created (e.g. kolla/ubuntu-binary-ovn-controller:queens, kolla/ubuntu-binary-neutron-server-ovn:queens). Hence, we used an approach which augments the standard Kolla-ansible deployment with manual configuration of the extra containers necessary to get the system running on OVN.

As always, many smaller issues were encountered while getting the system working – we will not detail all these issues here, but rather focus on the more substantive issues. We divide these into three specific categories: OVN parameters which need to be configured, configuration specifics for the Kolla OVN containers and finally a point which arose due to assumptions made within Kolla that do not necessarily hold for OVN.

On the controller node, it was also necessary to set the following parameters:

On the compute nodes this was necessary:

Not many changes to the service configurations were required. The primary changes related to ensuring the the OVN mechanism driver was used and letting neutron know how to communicate with OVN. We also used the geneve tunnelling protocol in our deployment and this required the following configuration settings:

For the OVN specific containers – ovn-northd, ovn-sb and ovn-nb databases, it was necessary to ensure that they had the correct configuration at startup; specifically, that they knew how to communicate with the relevant dbs. Hence, start commands such as

were necessary (for the ovn northbound database) and we had to modify the container start process accordingly.

It was also necessary to update the neutron database to support OVN specific versioning information: this was straightforward using the following command:

The last issue which we had to overcome was that Kolla and neutron OVN had slightly different views regarding the naming of the external bridges. Kolla-ansible configured a connection between the br-ex and br-int OVS bridges on the controller node with port names phy-br-ex and int-br-ex respectively. OVN also created ports with the same purpose but with different names patch-provnet-<UUID>-to-br-int and patch-br-int-to-provonet-<UUID>; as these ports had the same purpose, our somewhat hacky solution was to manually remove the the ports created in the first instance by Kolla-ansible.

Having overcome all these steps, it was possible to launch a VM which had external network connectivity and to which a floating IP address could be assigned.

Clearly, this approach is not realistic for supporting a production environment, but it’s an appropriate level of hackery for a testbed.

Other noteworthy issues which arose during this work include the following:

This is certainly not a complete guide to how to get Openstack up and running with OVN, but may be useful to some folks who are toying with this. In future, we’re going to experiment with extending OVN to an edge networking context and will provide more details as this work evolves.

Following on from our 2nd meeting, the Swiss OpenStack user group met on 24th of April at the University of Bern.It was an excellent event with many attention grabbing presentations! A big thanks goes out to the sponsors:

Once we kicked off
, there were five presentations, 3 which were more detailed and 2 that were more lightning talks in nature. The presentations in there running order were: 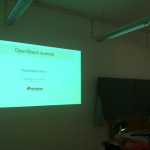 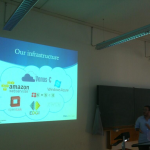 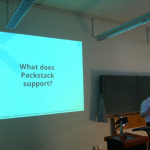 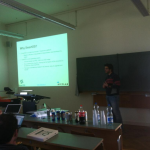 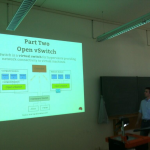 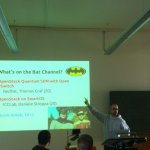 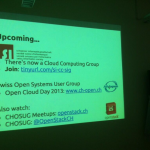 There are other upcoming Swiss events that will include much talk of OpenStack. Of note are:

Also the Swiss Informatics Society have started a cloud computing special interest group, where all folk active in cloud are welcomed to join. More details can be found at their site.