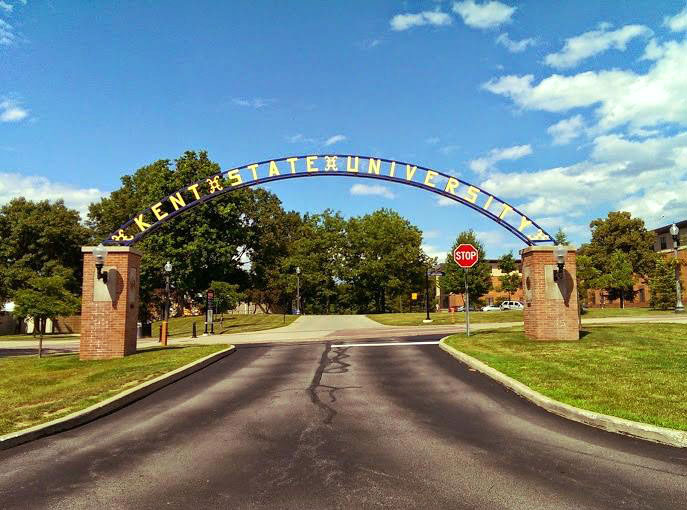 From ZHAW to KSU – A Love Story in Multiple Ways

During her semester abroad in 2015, Jennifer Reinhard fell in love not only with her future husband, but also with her new home. In the following blog post, written a year after her graduation from the ZHAW, she describes her new life.

The temperature fell to -4 degrees Fahrenheit last night. Knowing it is -4 outside already makes me shiver, especially once I convert unfamiliar measurements. I have been in the United States several times and still cannot get my head around Fahrenheit, miles, feet, cups, ounces, and so on. It all just still doesn’t make sense to me. After conversion, -4 degrees Fahrenheit then turns out to be -20 degrees in Celsius. Great! Why did I decide to move here again?

However, once the sun is out, the snow-covered yard sparkles like a sea of diamonds.  It is winter in Northeastern Ohio, and yes, there is snow; more than I have seen in recent years near Winterthur. I do enjoy it, though, as long as I don’t have to leave the house. I have just successfully finished my first semester of graduate school at Kent State University (KSU), and I am now enjoying my four weeks of winter break. It is good to be back in Ohio for many reasons – but let me start from the beginning.

For my semester abroad 2015, I chose to attend Kent State University in Ohio because I fell in love with the country and its people, I liked the campus and the scenery of Kent, and I liked the overall Midwestern vibe, less tourists and more “America”. While at Kent State, I enjoyed taking a variety of classes, one of them with Dr. Erik Angelone, who made me aware of the university’s master’s program in translation. The department of Modern & Classical Language Studies (MCLS) offers an M.A. in Translation in German, French, Spanish, Japanese, and Russian. This means you translate from one of these languages into English. Along with the master’s degree, the MCLS department offers competitively awarded Teaching Assistantships (TA). This means that once selected to be a TA, graduate students teach a foreign language to undergraduate students. In return, the TA receives a yearly stipend and more importantly, a tuition waiver. With $10,000.00 tuition fees each semester (for an international student), the TA positions are highly sought after.

Apart from my studies at KSU, I explored Ohio, made new friends, and, most importantly, met my future husband. (We are getting married this summer). Yes, I admit, meeting him was one of the main reasons why I eventually made the decision to return to Ohio. Apart from my personal love story, however, I also began one with the state as well as KSU. I fell in love with Ohio due to the scenery, nature reserves, lakes, and biological habitats of all kinds, plus I felt comfortable at Kent State (and I have earned excellent grades).In addition, Kent State has one of the best translation programs in the country, so I would get a degree from a school renowned and respected in the field of translation. The master’s program at Kent State was something worth considering, and I eventually decided to apply.

Nonetheless, the path back to KSU, Ohio, and my fiancé, was rougher than anticipated. Once I had all application materials together (recommendation letters, oral audio samples, papers in English and German, Motivation letter, official transcripts, financial statement), I had to submit them to the Office of Global Education, as is the process for all international students. They then approve your application, convert your grades to the university’s letter grading system, and submit the package to the department who will then decide.

Part of my challenge was due to the fact that it took about two months until I learned of my acceptance, although it was only conditional. I was then informed that I would not be awarded a TA because I averaged only a C, and that the department required at least a B average to consider a candidate for the award. My heart skipped a beat or more when I read that. Given the fact that during my semester abroad at KSU, I only had A’s and A-, and my ZHAW average was a 5.17, how on earth could my performance be converted to a C? It was not until they realized they had applied the German grading scale to my grades that they went over my file again.

Weeks later, I finally heard that it was all resolved. I was not only accepted but I was also awarded the Teaching Assistantship and stipend. My near future was decided, and my multiple love stories would continue. And so last summer, I packed my life into three suitcases and moved to Ohio; becoming an official Swiss abroad (Auslandschweizer), ready to earn my master’s degree and teach German to undergraduates.

Life in the U.S. is different in many, many ways, but the biggest difference is probably the school system. Student life at KSU is very different from life at the ZHAW. At KSU, you have loads of homework and assignments that all will be graded and count toward your final grade. Many courses at KSU have some sorts of penalty if you don’t show up for class (i.e. a grade drop), but there is no such thing at the ZHAW. Grading seems to be less harsh at KSU than it was the ZHAW. However, grades can drop really fast if you miss homework assignments. What I personally like best of the many differences is that finals week is before Christmas, so by the time the holidays come around, there is no studying to do and you can actually enjoy doing nothing (i.e. binge-watch Netflix) for four weeks straight.

Apart from being a student, I am also a teacher. I taught one class Elementary German I during fall semester, and will teach two classes Elementary German II this coming semester. Teaching German is fun, but I never realized how much time grading consumes. So there is that challenge, struggling with time to do homework and get essays and tests back to your students in a timely manner, and still have a social life, too. I think it has been worth the challenge though.

All in all, I feel I have made a great decision to pursue a master’s degree at Kent State University so far, and I am looking forward to the upcoming semesters. So here I am, in wintery Northeastern Ohio. It is late. The sun sets really early this time of the year. When I look out the window, the Christmas lights in the neighbor’s yard shine a golden light onto the white snow. It is different from the sparkle of the sun, yet it still has a homey and warm feeling – in my new Ohio home.