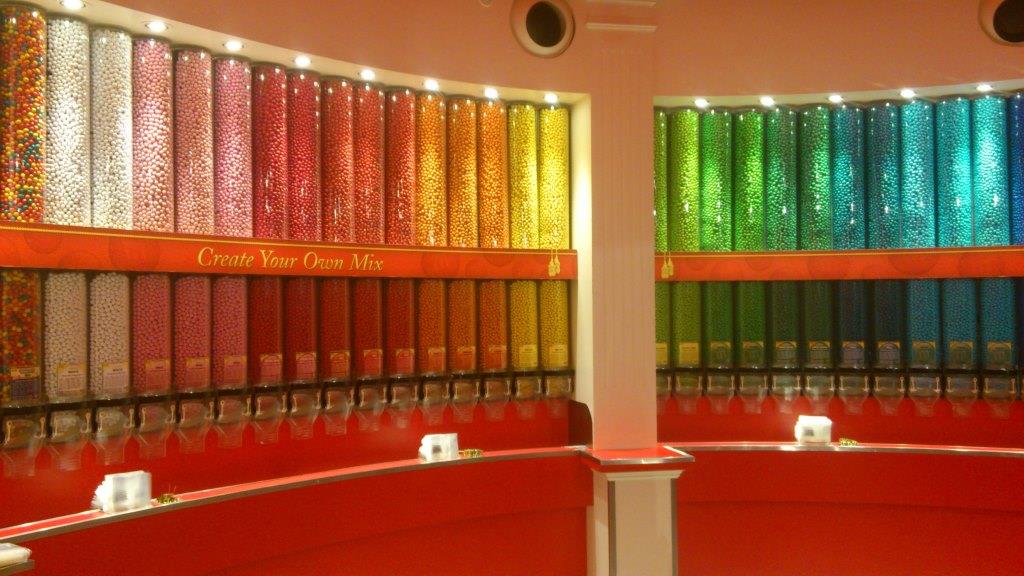 Create your own mix of … London!

„Visiting London is like shopping in an M&M store – an unforgettable experience for all your five senses.“ Christina Luong writes about her eventful time in London as a student at the University of Westminster.

For your eyes: You won’t see a more colourful or confusing place. That’s a good thing as well as a bad thing: if you allow yourself to be too distracted, you’ll get lost.

For your nose: Once you enter this world, you’ll be touched by the smell of sweetness … the sweetness of freedom.

For your ears: As this is a tourist spot, you can hear many different languages – even more than at a language school.

For your taste buds: You’d better prepare yourself for a flavour flash – sometimes it’s pretty hard to sort the good ones into the pot and the bad ones into your crop.

For your fingers (if you can’t keep your hands off new things): In some places, you’re allowed to ignore the unpopular ‘Do not touch’ warning sign. Don’t hesitate to approach things you’re interested in! It wasn’t a piece of cake at all when I first arrived at London Heathrow Airport. Everything was new to me; I had to find my way through a completely unfamiliar city, which has as many inhabitants as my home country.

Luckily I met this helpful little guy in the picture above. He accompanied me through the first few days in my new accommodation, where I was all by myself. Out of boredom, I started to communicate with him through the window. You may laugh now, but it seems like he actually understood what I wanted to say.

When I – finally – managed to pull myself together to explore my residential area, I discovered him in a park next to Bethnal Green Station. He was about to cross in front of me when he suddenly stopped and looked at me like he was trying to say ‘Excuse me, please!’ Then he ran away as if struck by lightning – my surprised gaze followed him. His target was the fish and chips someone had thrown away carelessly. Maybe all Londoners have this sixth sense: the ability to smell fish and chips even when they’re yards away.

‘You’re hot then you’re cold’ sings the nation’s female singer Katy Perry and thinks about … the taps in her home country?

The British are bright minds in terms of electrical discoveries. Imagine a world without Alexander Graham Bell’s invention to enable voice transmission over a wire! Nonetheless, there is optimization potential in other areas. I’d been warned about the taps here, but the issue had never bothered me − I mean taps are taps, aren’t they? Then it hit me when I washed my hands in my flat for the first time: You literally can just choose whether you want to be ‘hot or cold’. Infernally hot or freezing cold. Hell or Antarctica.

Luckily I found a solution to avoid burnt or frozen hands. All you need is a plastic bottle which fits the size of your sink. By cutting two holes in the upper side of the plastic bottle for the two taps and another hole in the lower side, you’ll get a little engineering miracle, which provides nicely warm water.

I’m neither an engineer nor a plumber, but I can definitely recommend ‘TapHelp’ (I’m sorry but I couldn’t find a better name for my invention) to everyone out there with the same problem!

I went home from Regent Campus on a sunny Friday afternoon and was looking forward to chilling out at home – not knowing what was waiting for me just around the corner.

Since the sun had decided to show up and greet London warmly, I walked to the bus station on Tottenham Court Road instead of heading towards Oxford Circus tube station, which was definitely nearer. As soon as the bus driver opened the doors, I ran up the stairs like a fool to get a seat in the upper front row. Every time I travel by bus, I try to get the same seat to benefit from free sightseeing with the perfect view.

‘Oh my sunshine, how I’ve missed you!’ I really enjoyed closing my eyes and feeling the sunrays on my face … well, it had been a while since I saw the yellow giant. A few minutes later, I couldn’t help taking a short nap. When I woke up, I noticed that the bus was still in the same spot. Suddenly a tinny voice announced ‘8 to St Paul’s’ … but I had to go towards Bow Church. I alighted – whether I wanted to or not – near St Paul’s Cathedral and decided to walk around, spontaneous as I am.

The strange bus incident was the best thing that could happen to me. I somehow found myself again near Blackfriars Station after wandering through charming narrow alleys. Then I saw something that makes every tourist’s heart beat faster: Big Ben, the London Eye and a black cab all at once!

Indeed, London buses really know my needs: Instead of just driving me to must-see-places, I get forced to explore London all by myself (… like a true Creative Writing student).

Now it’s time to say goodbye after 4 exciting months in London. I’ll leave this place with mixed feelings: On the one hand, I really don’t want to go away from here. On the other hand, I’m really looking forward to returning to Switzerland – a main reason is surely my mom’s food, which I’ve been missing. After having eaten out for 12 weeks – I think it’s in everyone’s interest to keep me away from cooking – I’m craving homemade fried rice. I’ve tried nearly every restaurant in Chinatown, but the best restaurant is home sweet home. This message is for you, mom! 🙂 Okay, now switch to serious mode: As this will be the last post for my London blog, I don’t want to write just about food.

I can’t wait to go back to my family and friends to tell them all my stories about my student and tourist life in Great Britain’s biggest and most diverse city – stories about beggars popping up out of nowhere like mushrooms or stories about rainy Sundays (I won’t forget that Sunday when it literally rained inside the house – yes, there was water damage).

Last but not least: I’ve met many lovely people and count myself very lucky to have made many international friends, with whom I hope to keep in touch via WhatsApp or Skype.

I’m very thankful for the great time I had here in London and I’m pretty sure I’ll return to this city in the near future. Until then – cheers mates!