Today we started early on 04:30 AM and went to our inland flight from Peking to our second destination of the Field-Trip Chengdu. Chengdu is the capital of the Sichuan province in southwestern China. The history of Chengdu dates at leasts the 4th century BC. Back then it was capital of the Shu Empire.

After a drive without traffic we arrived as planed after an hour from our hotel Ritan to the airport of Peking. At the airport it was surprising that already so many people where in this early hours on road. As you properly can imagine, the airport of Peking is huge, so it was hard to find out where to go and find your place. But because of the inland flight the Check-In and baggage drop-off went very smoothly. The flight we took with the government-controlled airline “Air-China”. The flight was at all point, very comfortable and enjoyable so many of us took the opportunity to sleep a bit.

We arrived punctually at 10:40 AM at the airport from Chengdu. Our new tour-guide Emile picket our whole group from the Airport up and brought us with a new driver to the hotel “Holiday Inn Express” near the shopping mile of Chengdu.

Now we needed to prepare us hurry, because the next excursion already was planned. At the afternoon we visited the automobile-manufacturing from Volvo in the district Zhongjia. After arriving Lawrence (our contactperson from Volvo) received us friendly.

The tour at Volvo lasted about an hour, and the program was to see the hole first building, where the cars were assembled together.  Car- windows, doors, handlebars, electronics, dashboard and so far, was fitted in different station on the car skeleton. 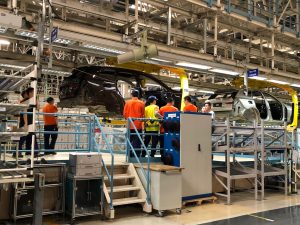 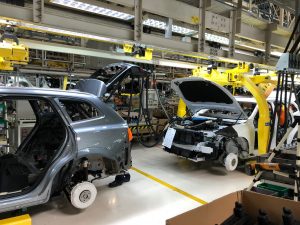 At the end of the assemble line, there was a completely finished car built, that could be driven. Our visit finished with a Q&A round where Lawrence answered all ours questions. 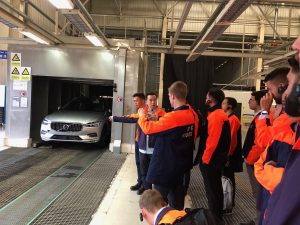 At the evening, we had all personal program. The executive-team had the pleasure to be invited for a networking dinner. All others, let’s call them “the peo” could plan their evening personally, and went together to eat chinesefood.

Today is the first day of this event. today, teacher from Chinese universities had presentations about chinese companies and their financial structure. It was very interesting. 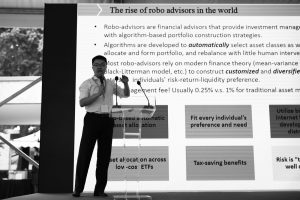 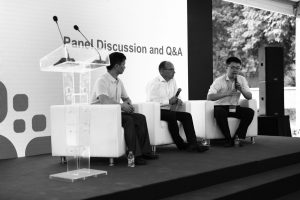 After a break, the alumni event started. The presentation of Mr. de Dardel, the swiss ambassador, was very impressive. The buffet, that was served afterwards, was very delicious. 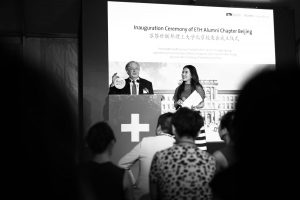 After that, another highlight of the evening started. The 1/8 finals of the world cup,
Switzerland vs. Sweden. The game was showed on two big screens. People of the Swedish embassy where invited to watch the football game with us. After an interesting game, the Swedish team won 1:0. Unfortunately the day ended with a loss for the swiss team. The day was still very impressive and interesting. Tired and with new impressions we went back to the hotel. 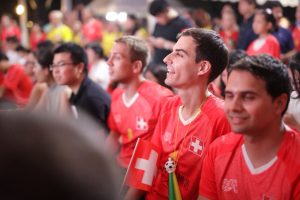 We started our day with the trip to Innoway. After a first confusion about the address, we found the right way with a short delay. After a short welcome from a student we went into a room with some fact and figures about Innoway as shown in the picture below. 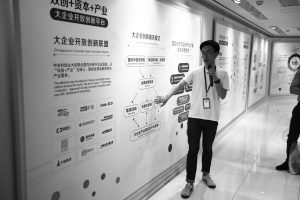 It was pretty impressive. Innoway is the biggest innovation park in Beijing and a spot where young entrepreneurs meet with investors. Some years ago, Innoway was a street with coffee shops which serve companies with their coffees before it got an hot spot for start-ups. This history is still recognizable. In the first floors are still the coffee shops and on second and further floors are the offices. After the introduction we had the opportunity to test some cool products which are better described by pictures. 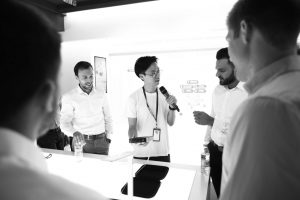 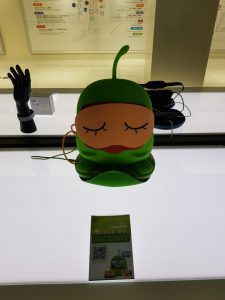 Not sure about the function, but it looks nice

After a short lunch in the area of Innoway our next station was Huawei. As soon as we arrived there, we were impressed of the luxurious and huge exhibition hall of the Tec company. 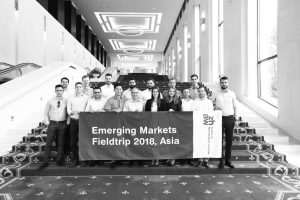 The tour started with a brief introduction in front of a stunning 16k display. The next two hours we got more information about Huawei, their current market position and product. There was no moment of boringness? And if so, you could always be amazed by the building itself. 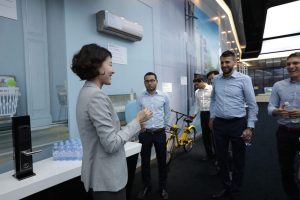 The tour ended if a handover of our present and a warm good bye of the tour guide. Our day program ended with the trip back to the hotel.

The first day is over and, oh boy, we got a lot of new impressions. In the early hours of the morning, our group set off for the Great Wall of China. In the car our tour guide Jimes introduced himself, who covered us over the whole day diligently with information about the sights. 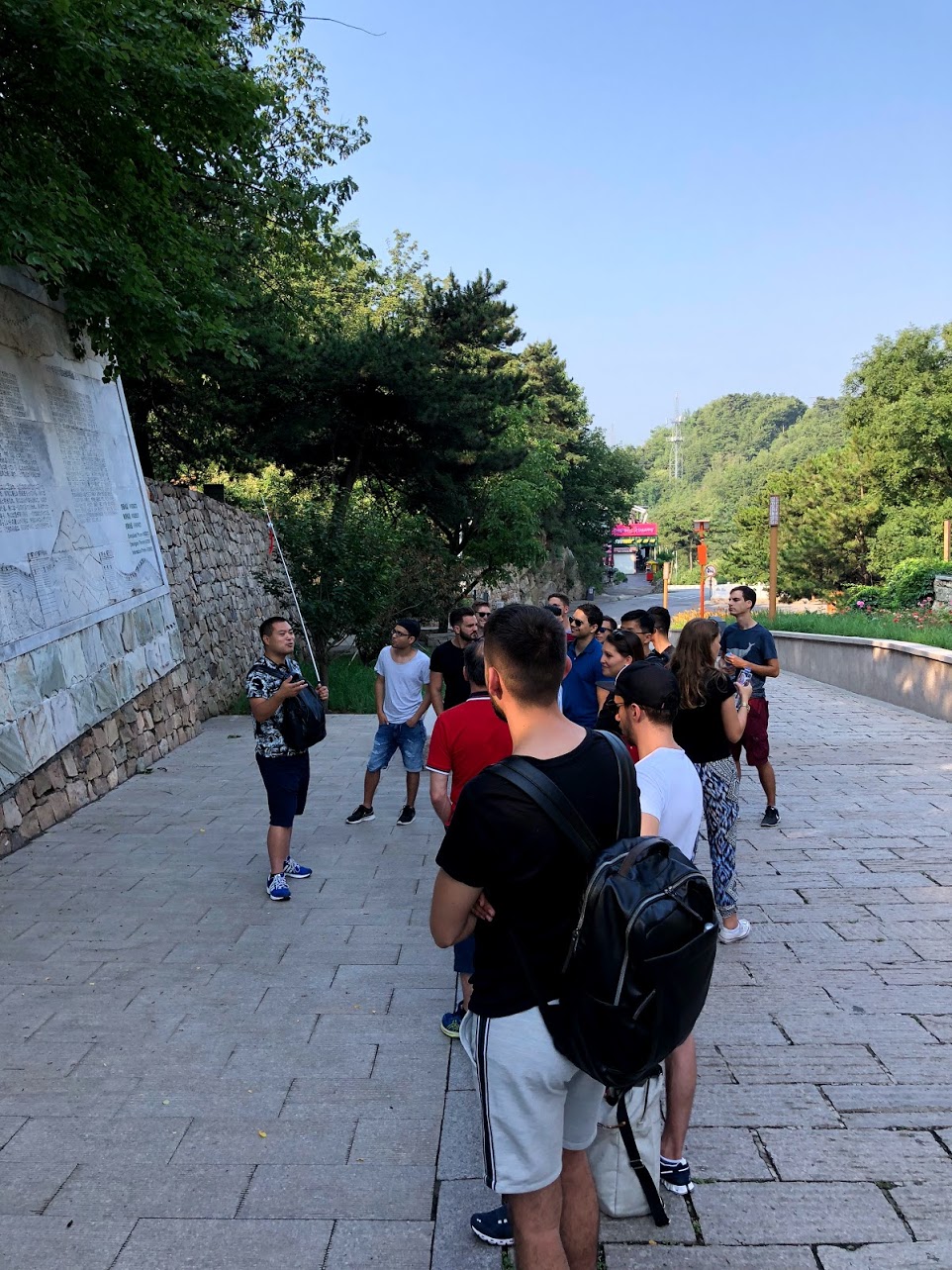 The weather was perfect and the view was wonderful. However, climbing the stairs is no walk in the park. Again and again very steep sections had to be climbed. The biggest challenge was the heat, which reached 38 degrees during the day. The effort was fortunately worthwhile and was rewarded with a fantastic view. The Mu Tiang section of the Great Wall is known for its dimensions and construction quality. 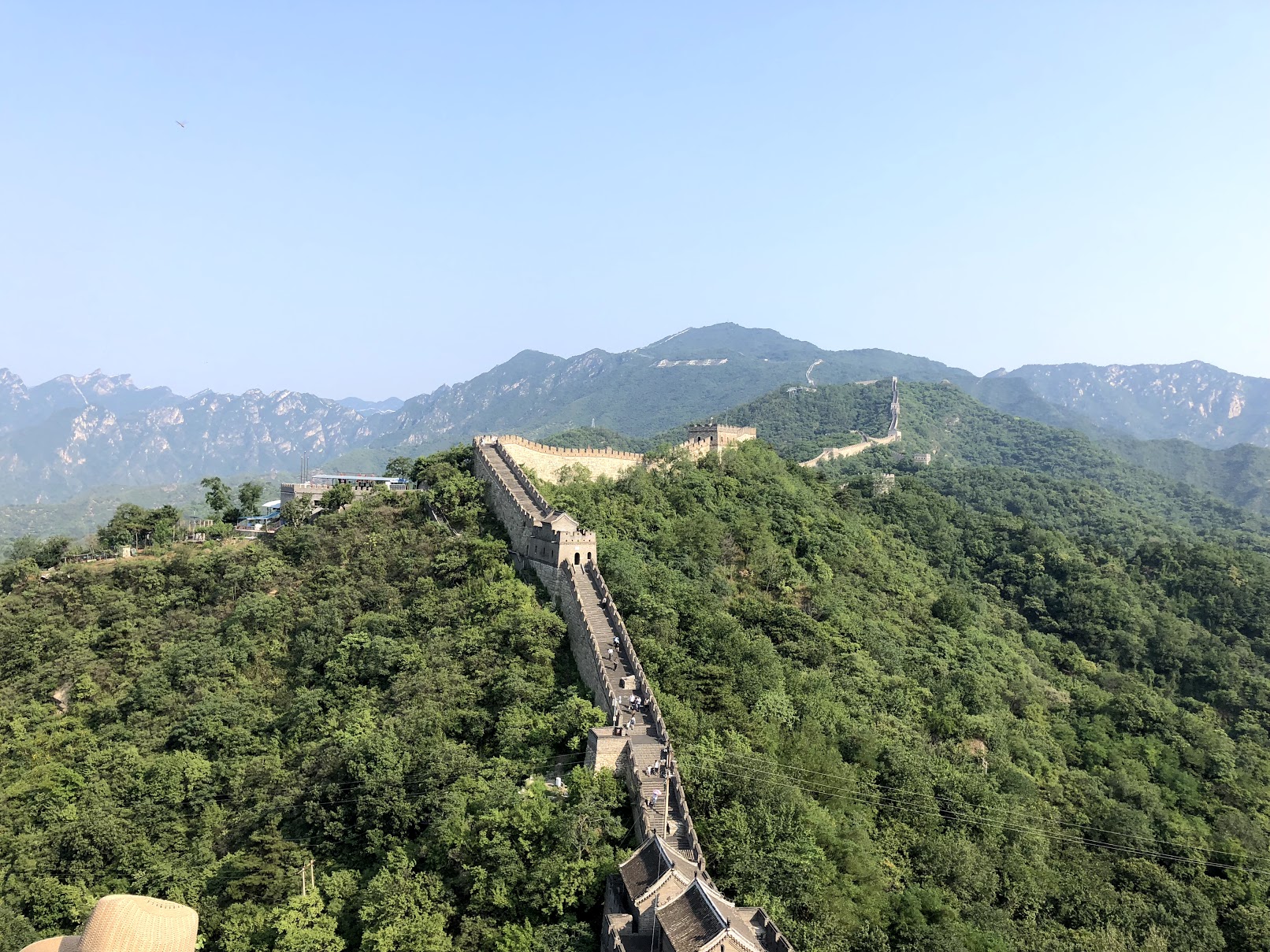 For lunch we had traditional Chinese food, after that the journey went on to the centre of Beijing. 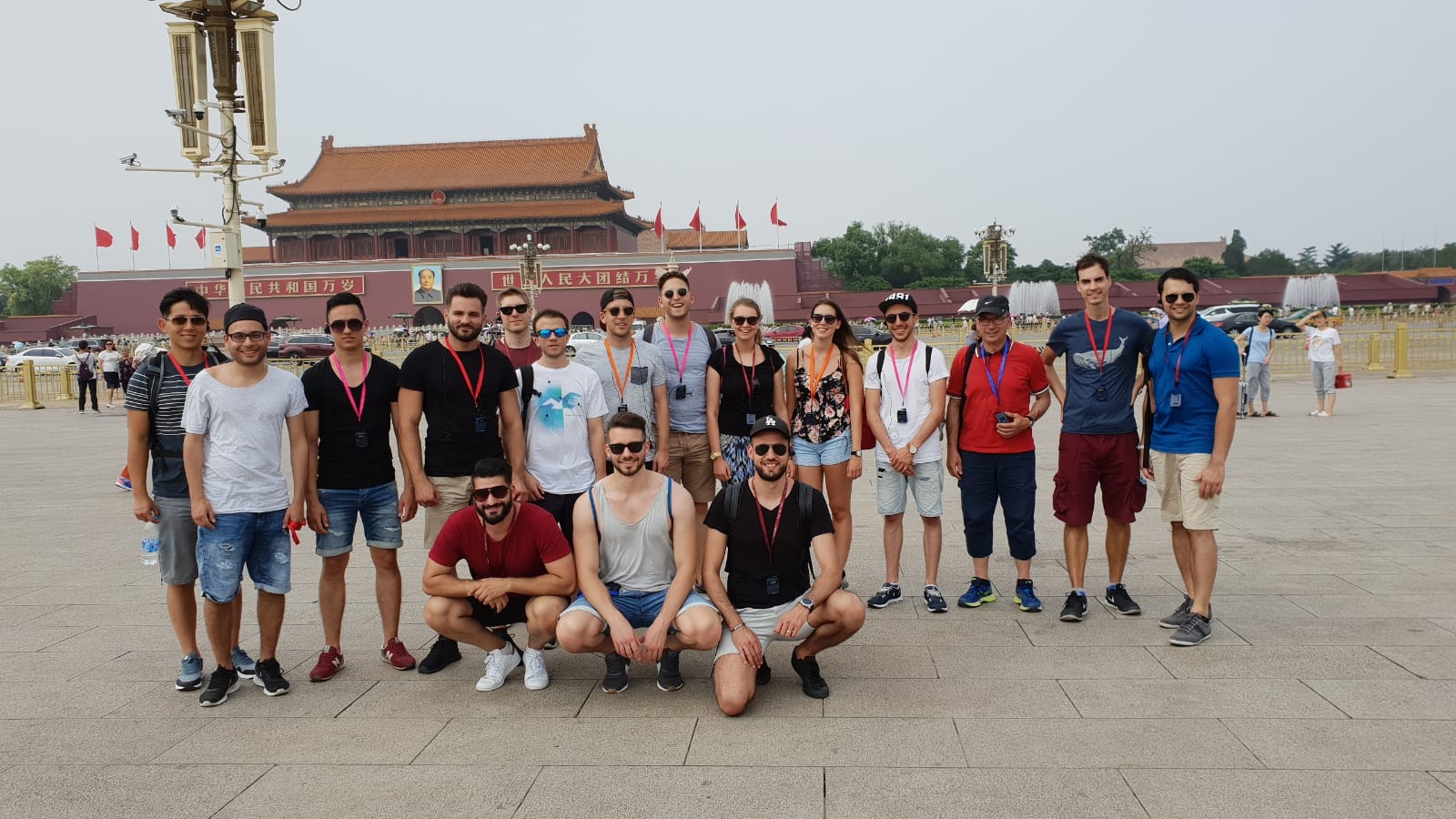 The tour continued on Tian´anmen Square. This place became sadly known through its student massacre in 1989. After a brief introduction to its surrounding buildings we entered the complex of the Forbidden City, where we learned even more about Beijing’s history. 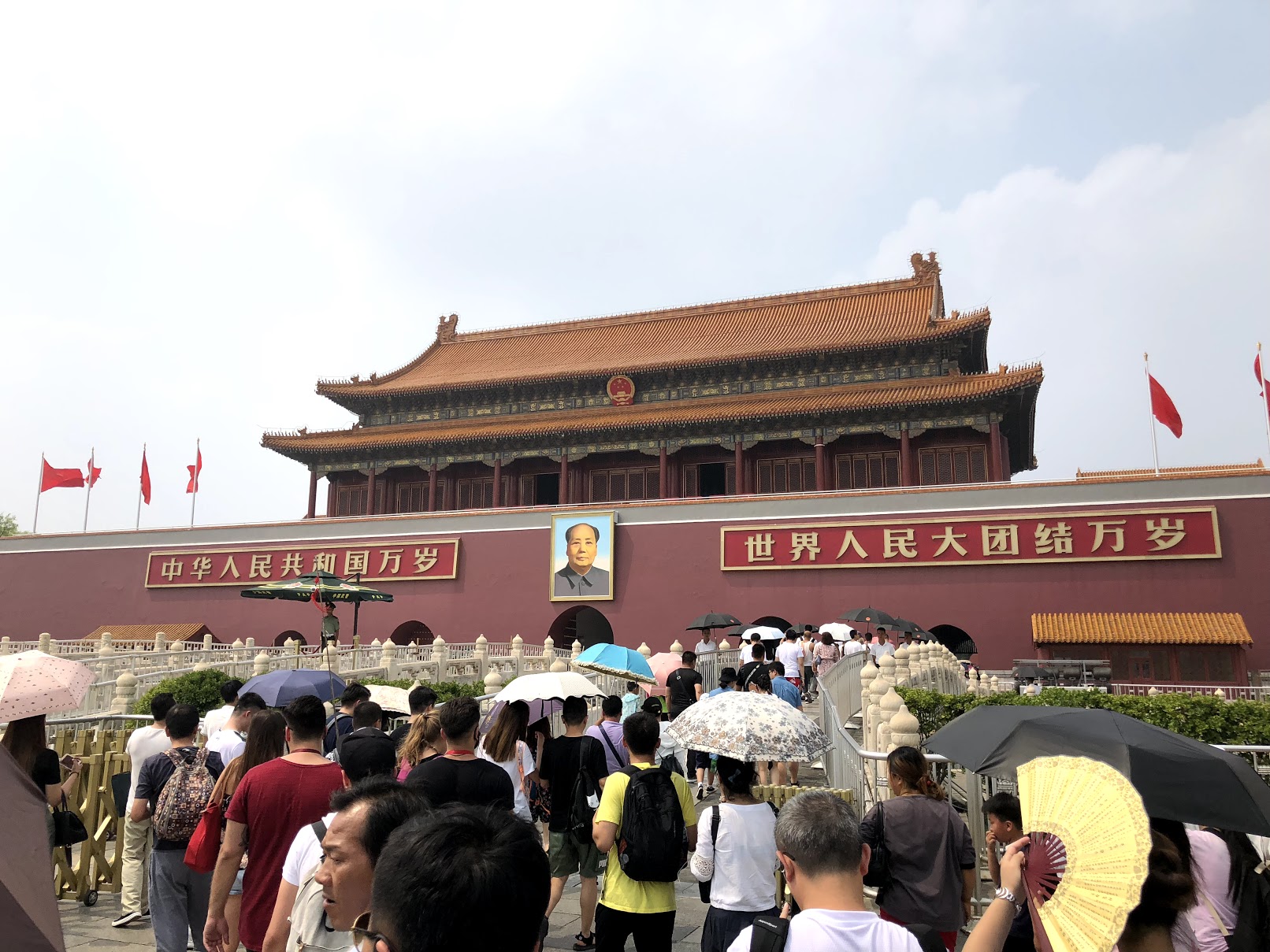 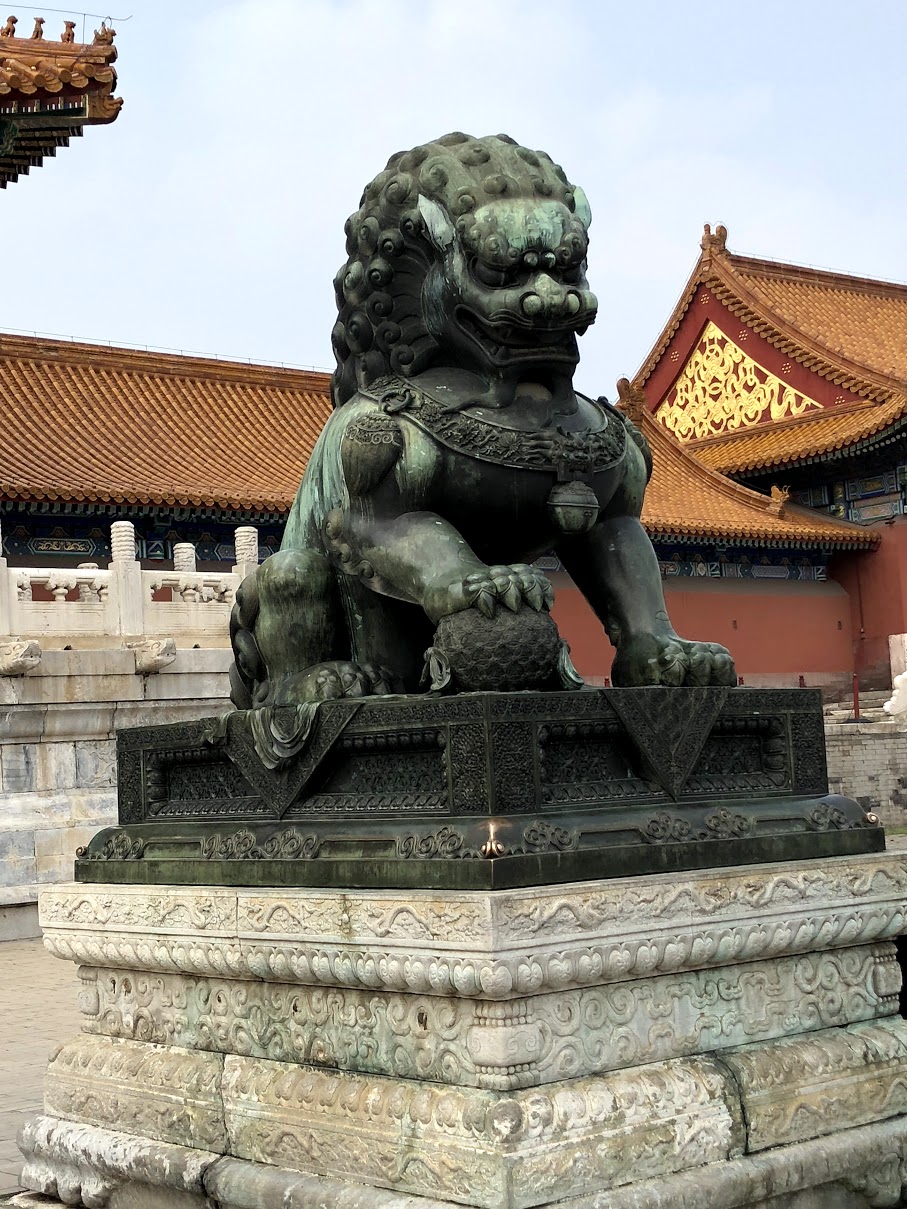 The last sight for today was the Behai Park, which lies northwest of the Forbidden City. The park is a typical Chinese garden where beautiful lotuses grow. Unfortunately, these are not flowered during our stay. 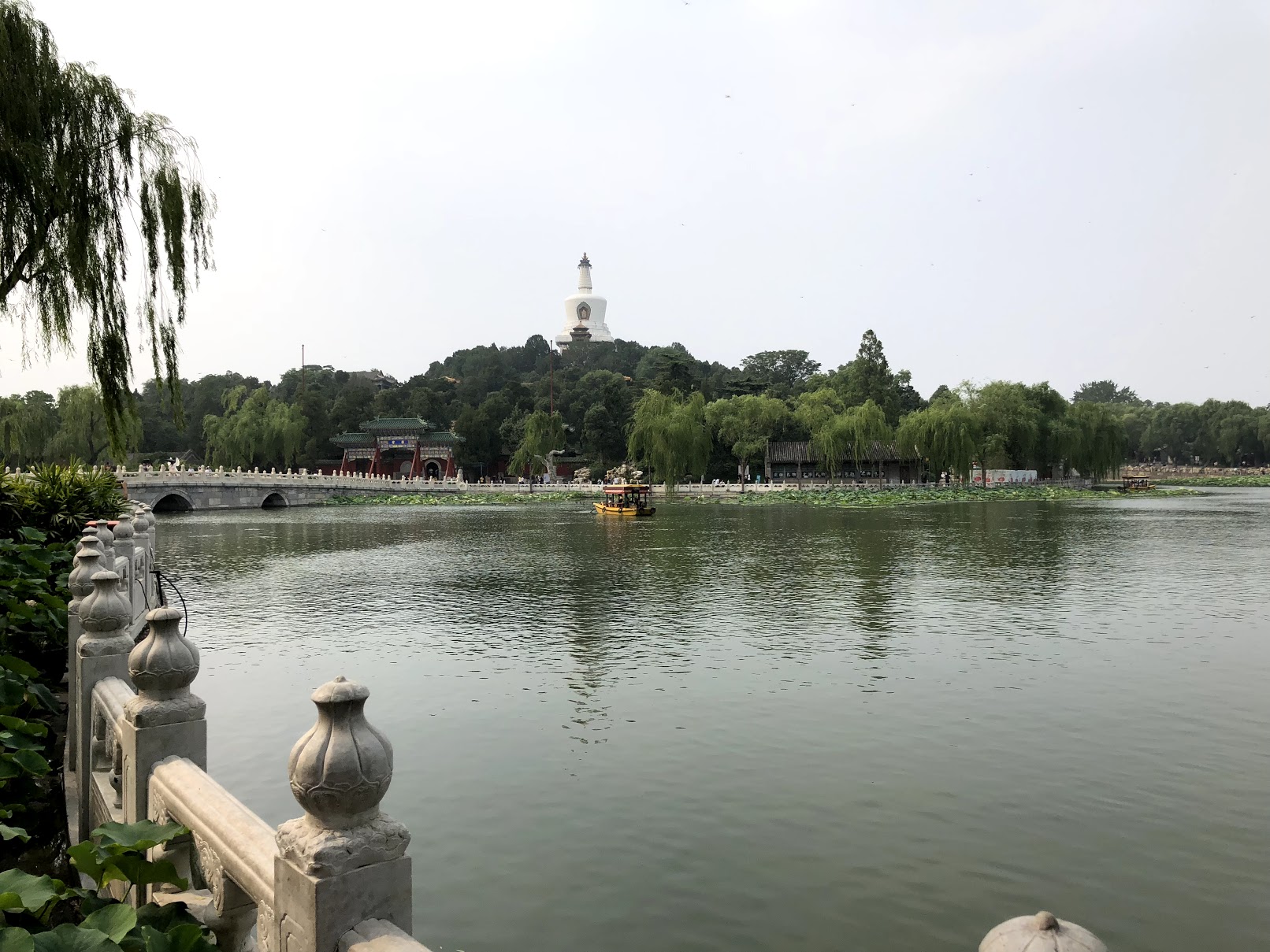 To round off the day, we indulged in a Chinese barbeque. The specialities of the restaurant were the leg of lamb and the beef. The food was fantastic.