Meteorology and Environment in Aviation

On January 13-17, 2020, Julien and I attended the meeting of the SAE E-31 Committee, which took place in the historic Glamorgan Building of Cardiff University (little did I know that it would be the only face-to-face meeting the committee would have this year…). As usual, the first day of the meeting was devoted to the contributions of the bleed air subcommittee, which develops practices and standards for cabin air quality testing. The remaining days were taken by the gaseous and particulate subcommittee, where I am a member.

During the meeting, I presented two works:

The first, which I prepared together with Dr. Eliot Durand, the main author, dealt with particle size distribution properties of non-volatile PM (nvPM) emissions of various commercial turbofan engines. We also analyzed the use of particle size distribution for calculating particle losses in nvPM sampling and measurement systems. For that, we combined data sets from our team (SMARTEMIS data) and the Cardiff University team who operates the European nvPM reference system. Together, we have data for a wide range of engines, ranging from small business jet engines to the largest commercial turbofans. Once we get it published, this will be a unique piece of work (and hopefully handy for modelers!).

In my second contribution, I looked at ambient temperature effects on nvPM emissions. This topic is essential both from the regulatory perspective as well as from the scientific one. When aircraft engines are certified for emissions (gaseous and particles), the engine test points are usually set using the combustor inlet temperature corresponding to a given thrust at sea level in the international standard atmosphere. However, ambient temperature (and pressure) variability affects other thermodynamic parameters in the engine. For emissions, we mainly look at the combustor inlet pressure and the total fuel-air ratio at the combustor exit. Let’s say we run the same engine at high thrust at the same combustor inlet temperature at 25 °C and at 5 °C. At 5 °C, the pressure at the combustor inlet would be approx. 30% higher, and the fuel-air ratio would be approx. 5% higher than at 25 °C. Depending on the nvPM emission characteristic of the engine, this could lead easily to a 50% higher emission index (amount emitted per kg fuel burned). Luckily, we do have such datasets from previous test campaigns done at SR Technics, and we have tried various correction methodologies developed within ICAO CAEP. The correction for ambient conditions is also very important for estimating aircraft emissions during the flight from ground test data (only a very few emission tests have been done at cruising altitudes).

The meeting gave us a chance to network with our colleagues and also to explore Cardiff and its history. We went on a tour of the Cardiff Castle, followed by a Welsh Banquet in the Undercroft (traditional food accompanied by live music and entertainment).

The meeting concluded with a tour of the facilities of the Gas Turbine Research Centre (GTRC). GTRC operates a high-pressure combustor rig, which will be used during our tests with SMARTEMIS there in the framework of the RAPTOR project.

We are grateful to Dr. Andrew Crayford, Dr. Eliot Durand, and their co-workers at Cardiff University and GTRC for hosting this meeting! 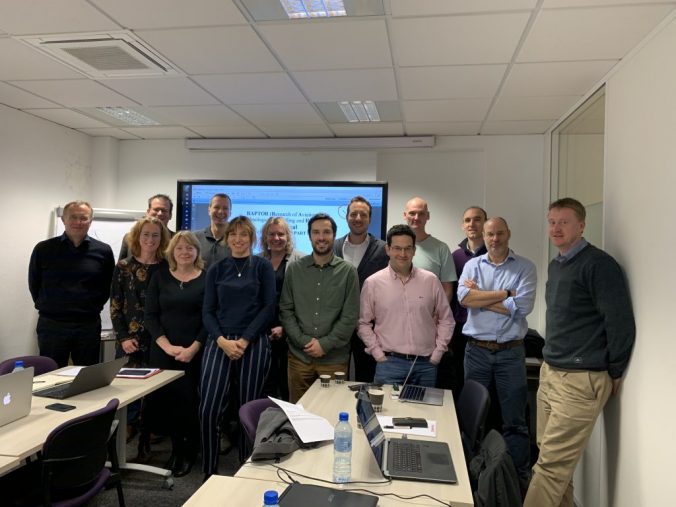 Kickoff meeting of the project RAPTOR in Paris

On November 18, 2019, I attended the kickoff meeting of the project RAPTOR (Research of Aviation PM Technologies, Modeling and Regulation) organized by the coordinator ENVISA in Paris.

RAPTOR is a part of the European research program Clean Sky funded by the EU’s Horizon 2020 program. The project brings together experts from academia and industry intending to improve our understanding of the air quality and health impacts of aviation particulate matter (PM) emissions. RAPTOR includes work packages (WP) dealing with health impact, modeling review, and PM measurement. Our team is involved in the latter two.

The modeling review WP aims to improve approaches for modeling aircraft engine PM (non-volatile and volatile fractions). This requires reviewing measurement data that can be used to improve relationships and correlations used for estimating aircraft emissions and their dispersion around airports and at cruising altitudes. This WP feeds into the health impact WP, as local dispersion of pollutants around an airport can have a significant impact on health.

The measurement WP focuses on quantifying uncertainties in the current and future ICAO standards for PM. As a part of this WP, we will perform extensive experiments on a combustor rig simulating an aero-engine combustor at the Gas Turbine Research Centre (GTRC) near Cardiff in Wales, UK. There, SMARTEMIS will be reunited with the European nvPM sampling and reference system after more than 7 years (operated by the Cardiff University / GTRC team around Dr. Andrew Crayford). This will be an excellent opportunity to compare the two systems side-by-side to evaluate the variability and different sources of uncertainty. We will perform two campaigns and the first one is planned for October 2020.

The kickoff meeting was very intense, but productive. It was good to finally meet the project team members that I had only heard during teleconferences before and to gain perspective on health impact research and emissions modeling. As usual, the social activities following the meeting could not be missed.