As part of “Zürich meets San Francisco – A Festival Of Two Cities”, the ZHAW Datalab co-organized the event Data Science and Beyond: Technical, Economic and Societal Challenges, which took place at the campus of San José State University (SJSU) – in the heart of Silicon Valley. One interesting fact about SJSU is that it has the highest number of graduates among all US universities that get jobs either at Apple or Cisco. 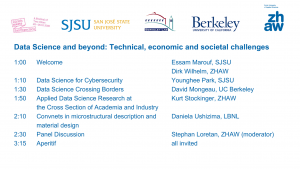 The event was kicked off by four highly interesting presentations. Younghee Park from SJSU showed various examples of how data science can be used to solve cybersecurity issues. These issues become even more pronounced in the future as more and more objects such as cars, refrigerators, toys etc. are connected via the Internet of Things. David Mongeau from University of California at Berkeley highlighted several data science applications and mentioned that the fourth member of the prestigious Berkeley Institute for Data Science was a Swiss researcher who now has a research group in Lausanne. Kurt Stockinger from ZHAW Datalab gave insights into mega trends in computing and presented applied research projects done in collaboration with industry. Examples were segmenting news paper articles based on content, optimizing the maintenance of ships and querying large bioinformatics databases in natural language. Daniela Ushizima demonstrated how neural networks can be used to query images of scientific data and thus opened up new possibilities for scientific data exploration.

After the presentations, Dirk Wilhelm and Kurt Stockinger of the ZHAW School of Engineering as well as Stephan Loretan of the ZHAW School of Management and Law discussed technological, economic and societal challenges associated with the rapid evolution of data science and new digital technologies with experts from SJSU, the Lawrence Berkeley National Laboratory and the Berkeley Institute for Data Science. The audience very actively participated in the discussion. The main interest was in questions concerned with customers’ privacy and how potentially new start-ups could compete with tech behemoths like Amazon, Apple, Google and Facebook in the race of data science. The main consensus was that also in the future there will be market niches that require either specific regional adaptions or customer-specific solutions and thus create opportunities for new market entrants. 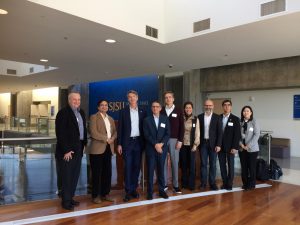 The picture shows the speakers and the panel participants.