The second day started in the City Box Hotel with the beautiful sight of our group in their best business casual outfits. After a brief outlook on today’s program, we were welcomed by professor Jaak Aaviksoo.

Prof. Aaviksoo fulfilled various functions throughout his impressive professional life. He functioned as rector of the two biggest universities of Estonia, was a member of the Estonian Parliament, took the role as Minister of Defense as well as Minister of Culture and Education. He shared insights of the life of many Estonians in the changeful history of the country between the different influences of Germany, Denmark, Russia, and the west. All those different rulers left a unique impression of cultures that shaped todays Estonia.

Prof. Jaak Aaviksoo pointed out the importance of the open mindset of the Estonian universities, which allowed Estonia to attract many students from countries all over Europe, after the fall of the Soviet Union in 1991 as the education system had to start from scratch. This was the third total system change within one generation of people and the population was wishing for a phase of stability. As a former socialist system the society could start all over and started as a society without powerful family-dynasties and working class. Each citizen was handed a starting capital (around 20 Deutschmark) and this was the beginning of an own national currency system. This point is quite unique among European countries. In general, finding an Estonian way of liberation from the neighbouring Soviet Union marks a constant between the past few decades and continues up to today. This way led the country through the completely unregulated period of the “wild east” where the first foreign capital flew into the country and the gray and black market built most of the economic activity. The privatisation of the early ninety’s led to a wave of unemployment and social disruption and 60% of the jobs were gone within tree years. The reasons for rise of the IT-branch in Estonia was the existing field of cybernetics within the communist ideology and the sheer need for pragmatic solutions caused by the absence of funds to run the government. The newly founded young Estonian banks of the early 90s started right from the beginning on an electronic infrastructure, which allowed them to skip many of the development steps other finance institutes from other country had to go through. An important milestone was the first internet connection in 1992. From there on Prof. Jaak Aaviksoo was part of a group within the government who set the aim to connect all schools in the country to the internet in the period from 1995 to 2000. This marked the starting point of the exceptionally advanced position of Estonia in the digital infrastructure today.

As most important factor Prof. Jaak Aaviksoo mentioned the compulsory digital identity system, which made all the following services possible. He mentioned the mindset to take some risk as important to introduce digital services. Even if only 92% of the transactions are successful, often the economic break-even is already reached. Additionally, it brings the provider of those services in a position in which the organisation must improve those services which can accelerate the process compared to an “develop to 99.99% and then launch”-approach. Furthermore, the ownership of the collected data is a crucial factor. The Estonian government started with a decentralised system in which all data belongs to the citizen and every access is recorded in a logfile. So, the digital system overall is nowadays saver as traditional paper recordings and enjoys a great amount of trust throughout the population.

After a short break for lunch and the transfer to the Office of the Strategic Management of the city of Tallinn. Mats-Laes Nuter and Aado Altmets of the office shared the current strategy of Tallinn to further advance in the field of a connected and wisely developed city. The vision of the city of Tallinn is presented in six focus points: Friendly urban space, Creative global city, Healthy mobility, Green transformation, Kind community and “Home that includes the street”. Tallinn looks back on a period of rapid population growth and accounts for 40% of the population of Estonia. The streets make up a huge part of the perception of a city.  The strategic office focuses on this aspect to make the city more vibrant. To be a creative global city the wanted to create as many learning places within the city area as possible. Those places are part of classical education institutes such as universities and primary schools as well as parks and other public spaces. The healthy mobility goal focuses on a good infrastructure for public transport and slow traffic. It should be accessible to every citizen from 8-80 years. A further point is the steps toward a CO2-neutral city, which should be reached in 2050. In participatory projects the city takes steps to get closer to this goal and to increase biodiversity in a city environment filled with live. Those projects are chosen by voting on which every resident of the city above 14 years of age can participate. Those practices are as well a part of the goal to create a kind community which stands together and builds a strong and courageous civil society. Mats pints out, that this probably contradicts the natural behavior of the Estonians, which aren’t known for their social extroversion. The densest parts of Tallinn are the Soviet built family homes in the suburbs,  which are now on the limit of their usable lifetime and need renovations especially to make them more energy efficient. The standardized type of those buildings allows to use prefabricated elements which cut down building-time by a factor of three.One specialty is the type of land ownership. The privatization in the aftermath of the collapse of the Soviet Union left the city of Tallin with few parts of land.

The strategic management office is located directly under the city council. They function as consultants and coordinate strategic aspects of all other directions of the city government but have no decision power operationally. A vital part of the implementation of any strategy in the public sector is the partnership approach with private stakeholders. Usually, a project takes around four years from inception to finish, which coincidentally matches the legislative period of the city government. All strategic guidelines and goals are wrapped up in one document and is regularly updated and extended. In the framework of the “global goals for cities” which want to face the SDGs on a local level Tallinn is the European green capital next year. In a key performance indicator system made of 600 indicators. Via the annual economy report those indicators will be communicated to the political organs and the public. Aado Altmets then presented some ongoing Smart City projects. Often those occur, when data of different city government branches are combined and used to find innovative solutions. There are two different groups which are working in the field. The Smart city and the Future City unit. The unit of Aado Altmets, the smart city unit mostly orient their work along the climate neutral Tallin action plan. One interesting part of the city’s actions toward even more digitally advanced citizens are learning robotics already in kindergarten. One major portal of communication is the digital Tallinn-website where the GIS-Browser, Election-Information or operational information can be easily accessed. In an ongoing project the site will be further streamlined to enhance the user experience. Another innovative tool to make city-planning more accessible to the residents is the project green twins. This is a 3D-plan of Tallin in which planned construction projects can be visualized and help to improve the understanding of the impact of future infrastructure projects. In combination with the augmented reality app of the city the residents can experience a realistic outlook. Furthermore, the pollinator highway should act as an linear park along a abandoned railway line which can connect an 11km long area of the city for pollinators such as wild bees or butterflies.

Another brief transfer by foot later we arrived in front of the impressive building which houses four ministries of Estonia. Our way took us to the Ministry of Economic Affairs and Communications where Indrek Onnik from the government chief information officer office (GCIOO) welcomed us und started an interesting round of discussions. Firstly, once more the importance of trust for the eGovernment-System was pointed out and an anecdote of a recent cyberattack lead the discussion toward the topic of cybersecurity. Then an overview of the fields of work the office was given. Among other areas the GCIOO develops the digital agenda and the national cyber policy, to update the principles of Estonian e-government, ICT-funding as well as awareness raising activities. One other active project is the building of a central governmental cloud solution. To reach effectiveness while stay dynamic as an organization the office follows an OKR approach (objectives and key results). Challenges Mr. Onnik mentioned in his office is the expanding costs to keep the existing systems running and the gap in salaries between the private sector and the government, which can make it hard to find a proper workforce sometimes. The GCIOO consists of seven teams working together to reach the set goals. For example, the data team is responsible for developing AI-related projects while the legal team provides the legal framework for the state build software codes such as chat bots on governmental websites. One main instrument of the GCIOO is the X-Road system which we already know from the visit of the eEstonia briefing center yesterday. The office of Mr. Onnik works on updates on the system and accentuates the resiliency and modern security architecture of the system.

After this long day and all the deep insight into the digital headquarter of Estonia, we left to further explore the city in an old-school analog way. 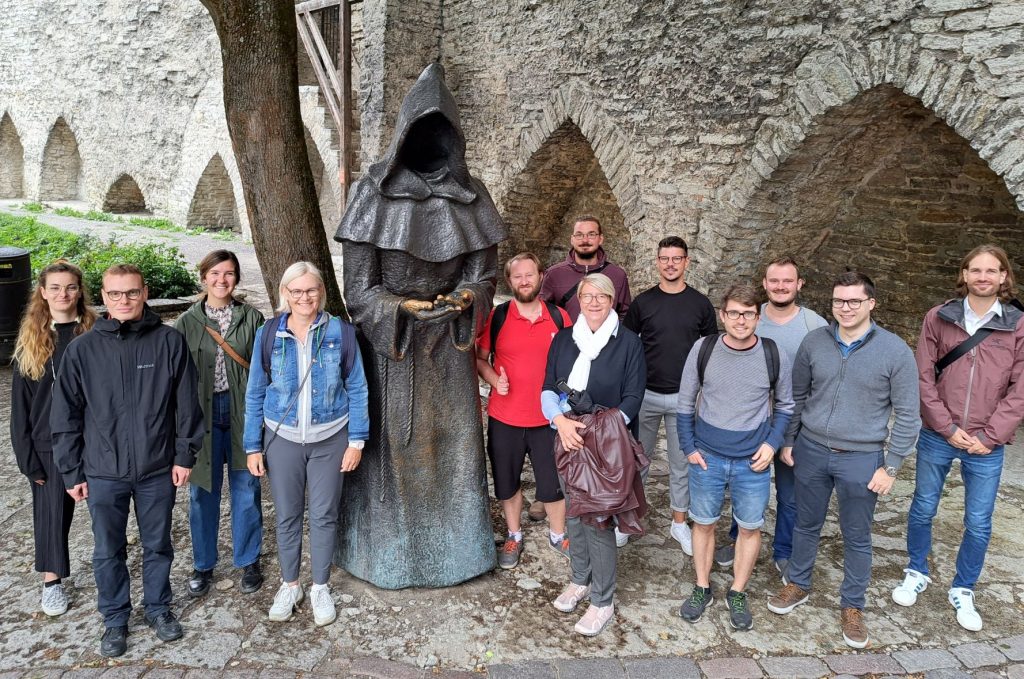 Tallinn – between occupation and digital excellence