The study trip is part of the International Management program at the ZHAW School of Management and Law and offers students valuable insights into the host country’s way of donig business, cultural differences, and important aspects of the local economic environment. This year, 33 students are attending the study trip to Casablanca, Morocco, led by Khaldoun Dia-Eddine and accommpanied by the head of the International Management program, Dr. Michael Kendzia. Furthermore, the study trip is organized and supported by Swiss Global Enterprise. 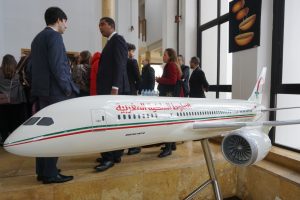 Flagship of Royal Air Maroc – the B787 Dreamliner

Royal Air Maroc
The day started with an early breakfast at the Casablanca Café in the Mövenpick hotel, with an interesting program ahead. Mr. Dia-Eddine gave us some important information about the program of the trip before we boarded the bus and took off to the HQ of Royal Air Maroc for our first company visit.

Upon arrival, Maria Tazi, Chef de Département Développement, warmly welcomed us. In three different presentations, the airline managers presented the company’s history, its current strategic focus, and the most important figures of their sales department. The Q&A session featured some interesting questions about the airline’s plans to establish a large hub in Casablanca, and further developing the African market. Being 60 years old, the company has managed to successfully reorganize its cost structures in oder to compete against the rising pressure from LCCs (Low Cost Carriers). Currently, the airline has four strategic focus points:

Following the presentations, the Airline offered us coffee and some snacks, and tooks us on a tour of their new training center. The center has only been opened last month and features state of the art training rooms for flight attendants, pilots, and station managers. 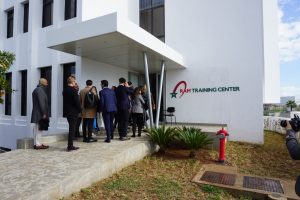 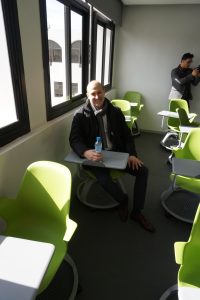 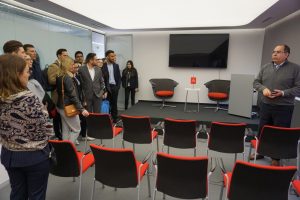 Overall, we gained valuable insight into a small airline (only 57 aircraft, compared to e.g. Ryanair with over 300, acc. to Ryanair.com) and its strategic focus to not just survive but even grow in a highly competitive environment.
After taking the first group photo of the trip, we again boarded the bus…

Swiss embassy in Rabat
After an 1.5h drive on the bus, we arrived at the Swiss embassy in Rabat. Unfortunately, the ambassador was needed elsewhere, which already gave us a first impression of the work at the embassy. Nevertheless, we were welcomed by the deputy ambassador, Ms Sibylle Obrist. She introduced us to the embassy’s task in general and the challenges in Morocco. Moreover, the heads of the different departments gave us an informative overview over the different fields the embassy operates in, including: 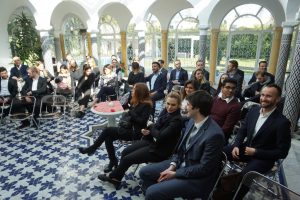 It became clear that especially the development cooperation was the field of most interest to the student delegation, bridging international relations with economics. The relaxed presentation was followed by an intriguing Q&A in which the staff has answered all the questions to total satisfaction. Subsequently, we endulged in a savory buffet, which rounded out the session. 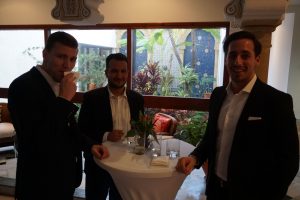 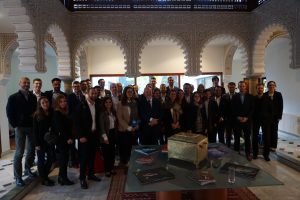 The visit to the embassy offered us important background information on how the Swiss government operates abroad, and how the interests of Switzerland are represented/reflected in the professional work of the embassy staff. Furthermore, we learned how companies can effectively use the Swiss diplomatic relations as leverage to gain access to competent decisions makers within the host government – a crucial process, especially in countries where bureaucracy can dramatically slow down a company’s international operations.

Elephant Vert
The last stop of the day was scheduled at Elephant Vert in Rabat. The company operates in the agricultural sector and offers alternative products without any negative impact on the environment. It was originally founded by a Swiss venture, Antenna Technologies. Elephant Vert has a range of biostimulants and biopesticides which are 100% organic and offer more sustainable solutions compared to conventional and potentially harmful pesticides. The firm operates in 5 countries and has around 500 employees. It not only engages in large investments (around 250m in the last 4 years) but also runs educational programs to raise farmer’s awareness of the benefits of sustainable planting. 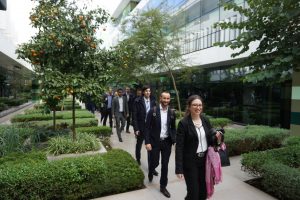 Walking through the (green!) gardens of Elephant Vert

After an interesting presentation and a stimulating Q&A session, we were treated to some traditional Moroccan patisserie and tea. Of course we could not miss the opportunity to take a last group photo for the day.

Following this last company visit of the first day, we commenced our journey back to Casablanca. This proved to be a longer trip than expected. Upon entering the centre of the city, we got stuck in rush hour traffic where we only slowly progressed for at least another hour. Despite the day being very compelling, all of us were delighted when we, after a long and wearing day, finally reached our destination: Mövenpick Hotel Casablanca.

Finally, we would like to thank all the companies and respective representatives for taking the time to meet with us. We were ravished by the hospitality and openness of the Moroccan company representatives as well as the officials in the Swiss embassy.