From Empress Maria Theresia to Dynasty of Count Starhemberg

As today’s program started a little bit earlier than yesterday, there were still some tired faces when we met at 8 o’clock in the lobby of Motel One. After a short briefing about the program of today, which included some general facts about the Austrian Court of Audit (Rechnungshof), mentioned as a secret highlight of the week by Pascal Horni, and the Austrian Federal Ministry of Education, Science and Research, as well as information about the speakers, we made our way to our first stop by public transport. The Austrian Court of Audit is located at Dampfschiffstrasse 2 in the financial district of Vienna. On our way we passed the Austrian Federal Computing Center, about which we already received some information yesterday. After a warm welcome from Mag. Sandra Fuchs and Mag. Bernhardt Schatz, we were introduced to the main tasks of the Austrian Court of Audits. Mag. Sandra Fuchs is a member of the General Secretariat of INTOSAI, the International Organisation of Supreme Audit Institutions. She is responsible for regional organisations and member services, as well as bilateral and multilateral contacts. 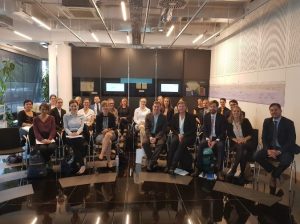 The Group at the Austrian Court of Audit

The Austrian Court of Audit was founded in 1761 by Empress Maria Theresia as a control body with the rank of a ministry. Within the framework of its constitutional independence, the Austrian Court of Auditors controls whether the public funds are used economically and functional. The exercise of public control is one of the cornerstones of parliamentarism and democracy. Consequently, independence of the Austrian Court of Audit is a big and very important factor. Unlike other ministries, with a normal term of office of 5 years, the independence of the ministry is guaranteed with a term of office of 12 years. The two main tasks of the ministry are; performance auditing and consultancy. 75% of the consultancy recommendations are being implemented. The other 25% often receive creative solutions and a period of 5 years for possible implementation. We were also introduced to the INTOSAI, which is an autonomous, independent and non-political organisation and operates as an umbrella organisation for the external government audit community. INTOSAI’s headquarter has been located in Vienna since 1968. It has 194 member states and Switzerland was one of the co-founders in 1953. Digitalisation is a major issue and regarded as a big opportunity. However, it is difficult and a rather slow process to implement such measures in the Austrian Court of Auditors, whereas at INTOSAI 30 people are already developing an app through a hackathon. After the presentation of Mag. Sandra Fuchs, Mag. Bernhardt Schatz introduced us to the Audit of the Austrian federal accounts. He presented some facts and figures, as well as the main tasks and the timeline of the annual report. We were happy to hear that Switzerland acted as a role model for the components of the federal accounts. One of the challenges is, that the budget regulations influence the budget allocation practice. This raises the question whether the independence of the ACA is guaranteed at all times.
Finally, we had the pleasure to enjoy a nice cup of coffee or tea and some refreshing drinks while we still had the opportunity to ask questions and continue our discussion.

After an individual lunch we directly met at the Austrian Federal Ministry of Education, Science and Research (BMBWF), located in the middle architecturally stunning city centre of Vienna. 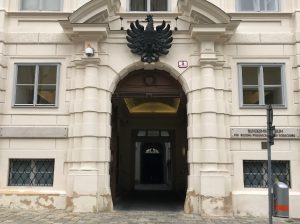 Entrance to the Austrian Federal Ministry of Education, Science and Research

The building of the ministry once belonged to the dynasty of Count Starhemberg and is mostly in its original state and was redecorated accordingly after the Congress of Vienna. Mag. Dr. Iris Rauskala, head of the section, warmly welcomed us to the baroque style conference room for a 2-hour presentation and discussion. The Ministry’s responsibilities in the area of education cover the entire school system including primary school, secondary school, university colleges of teacher education, adult education and lifelong learning. Since last year, the ministry has changed significantly. Since the formation of the new government, the Ministry has been divided into five sections, whereby the 4th and 5th sections deal on the one hand with universities and universities of applied sciences and on the other hand with scientific research and international affairs. 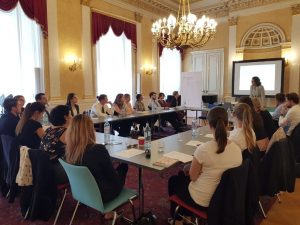 In total, the Ministry has a federal budget of EUR 78 billion for 2018, of which EUR 8 billion can be allocated to education and almost EUR 5 billion to science and research. The Austrian higher education area offers space for a total of 384’548 students with the majority of students (309’172) studying at the 22 public universities. Despite the Austrian federal system, these universities are regulated centrally by the Federal Ministry of Education, Science and Research, with the universities of applied sciences being controlled by municipalities or private sponsors. In comparison to Switzerland, which is also a federal country, this distribution of tasks is a characteristic difference. Austrian universities are characterised by a rather low degree of mobility, with the majority of almost 58’000 students coming from Europe (90.8%), especially Germany and Italy. In a European comparison, Austrian universities have a broad status of autonomy. The education sector is expanding continuously and the number of students is increasing, which is also reflected in an increasing overall budget. However, the number of students is increasing even more and is coupled with further challenges. For example, the study access is rather uncoordinated, there are many inactive but enrolled students, which results in an often long duration of study and high dropout rates. The ministry has defined a total of five impact goals in order to systematically tackle the problems. Mag. Dr. Iris Rauskala was quite critical regarding the impact goals, as they are not measurable, without a timeline and one goal includes different areas. When developing measures, however, it should always be ensured that the public interest is taken care of and the system is being improved. According to the head of the section, Mag. Dr. Iris Rauskala, education as a public good is very important for Austrias society and should/will probably remain so in the future.