After a short night of sleep we had to get up early to catch the bus to the Mekong Delta. Our departure was delayed by a few minutes because of an issues with the Air Conditioning. Our tour guide promised to get there save and sound without any further issues. A promise he could not keep. Anyway, the almost 2 hour ride was highly appreciated and almost everyone slept through.

Our first stop was the Cu Chi Tunnel visitor complex. The tunnels of Cu Chi are an immense network of connecting underground tunnels which were being used during the Vietnam War in the 1960s. The tunnels were used by Viet Cong soldiers as hiding spots during combat, as well as serving as communication and supply routes, hospitals, food and weapon caches and living quarters for numerous North Vietnamese fighters. The Relics of the 120km Cu Chi Tunnel complex are being located 70km in the North-West of Ho Chi Minh City Centre. Thanh, our tour guide showed us through the complex with its tunnel entrances, traps and buildings. He also gave us some great insights into the history of the Vietnam War which were very impressive. 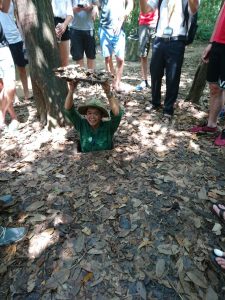 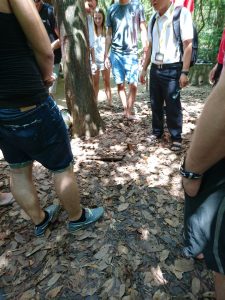 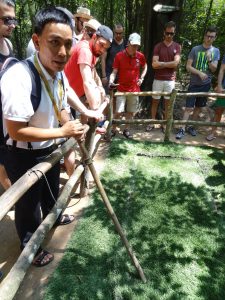 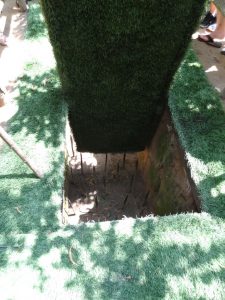 However, the highlight of the tour was the walk/crouch through the Tunnels. We were able to choose between the distances of 20 meter, 40 meter and 60 meter. The maturity choose the shortest way, only some brave students and Mr. Braun went over the full distance of 60 meter. Originally the tunnel were half as big as they are now for tourists. Nevertheless we found it already quite narrow. After the long tour everybody expected to have lunch at the venue. Unfortunately we had another 3 hour bus ride ahead of us. So we were pleased with a short snack break. 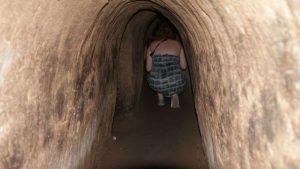 As we entered the bus for our next stop we were told that the AC of our bus has broken down definitely. We had to drive 40 minutes before we could exchange our broken bus with a “new” one. Around 3pm we finally arrived to have our belated lunch. The long wait was definitely worth it. The diverse food was very delicious and delightful. 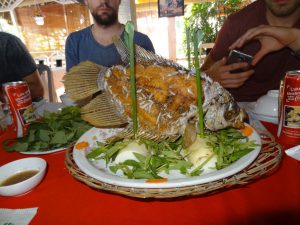 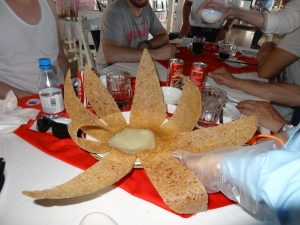 Our next stop was a harbor close to the restaurant where we started a boat tour on the Mekong delta river. In the middle of the tour we stopped and visited a local family, saw some crocodiles, had a snack and some brave students even took a shot which was preserved with snakes and indefinable animals. The end of the river tour was a short ride in a horse carriage. Back on the main boat we had a refreshing coconut juice while we headed back to our bus. 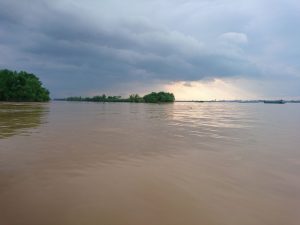 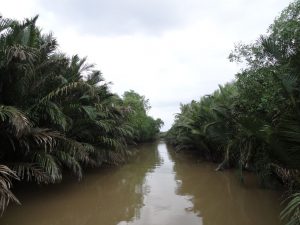 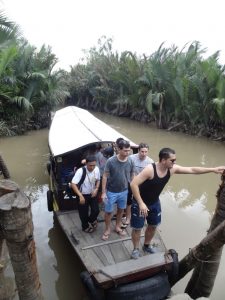 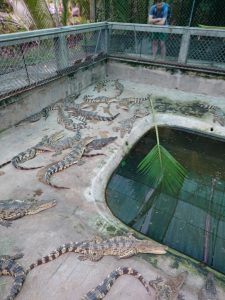 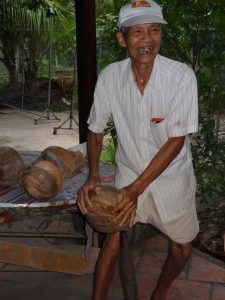 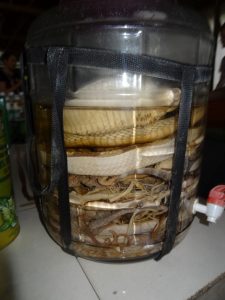 After saying good bye to 3 of us we hit the road to our last and final stop which was Can Tho. The bus ride was quite long and everyone was tired from the eventful and exhausting day. Finally we arrived in Can Tho around 10pm.

After a quick refreshment we headed to a restaurant were we had a last dinner as a group. The people at the restaurant did not speak English at all. Fortunately our student Anh Dung was able to communicate and translate. After dinner some students could not resist to take a swim in the hotel pool.

After a more or less long night of sleep the group had to catch the bus at 6.30 to visit the floating market. The ride to the pier took only 5 to 10 minutes were we switch to a boat. At the floating market Mr. Braun was kind enough to offer coffee for all of us. Furthermore we visited a local family, a rice factory and we were able to buy a variety of fresh and delicious fruits. The visit of the floating markets was a memorial experience and a great end of our field trip. 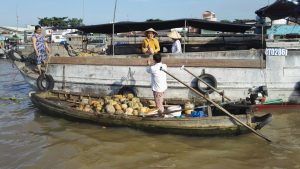 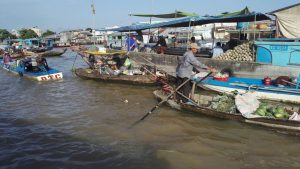 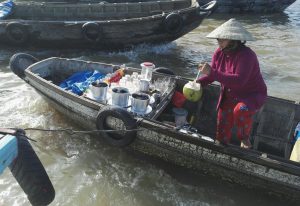 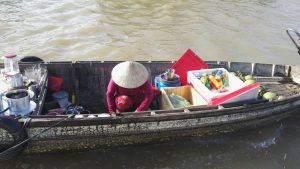 Back at the hotel we packed our belongings and gathered at the lobby at 10.30 for the official ending of the Field Trip. As the group has become really close, it was not easy to say goodbye.

In words of our tour guide: Goodbye my Friends!