After a night occupying our train wagon physically as well as acoustically we arrived in Xi’an. Most of us imagined Xi’an to be a small city – a chance to get some rest between Shanghai and Hong Kong. They were wrong. Our guide Ivy made that pretty clear when she told us about the political significance Xi’an had in former times when it used to be the capital city of China. When it comes to culture and history, Xi’an is still one of China’s important spots due to the Terracotta Army. Even though Xi’an might be smaller than other Chinese cities, it is home to 10 million citizens, which is inconceivable to us Swiss (especially for the ones among us coming from Appenzell, I can imagine). Ivy’s information that seemed more important to us at this very moment was that we could check in the nice Grand New World Hotel already and have a shower before meeting the warriors of China’s unifier Yin Shi Huang.

Ivy told us that after Yin Shi Huang’s unexpected death caused by mercury consumption they tried to cover the smell of his dead body by filling the coffin with sea animals (fun fact? or did I get something completely wrong?) while conveying the corpse back to Xi’an. That was when I realized that our earlier check-in might have been not only altruistically motivated (or good customer service as we know after studying at SML) but also out of self-interest. She welcomed us back in the bus and was happy to see the group more awake and less smelly. After Ivy provided us with essential background information on the Terracotta Army, actually seeing the emperors soldiers – buried to protect him in his life after death – was highly fascinating. The brutal policy of killing the artists and burying them beneath the soldiers to keep the army a secret made me think if he was not afraid of meeting his victims from his first life in his second life. 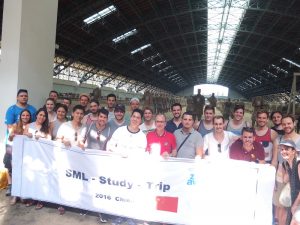 Although Ivy showed a tough leading style to keep the group together and actuate us we probably would not give a disciplined army: We had to change plans and go for lunch between pit 2 and 3 already.

In the souvenir shop some tried to apply their negotiation skills (they gained at SML) to get a good price for some hand fans (and succeeded of course).

After returning, some of us benefitted from the hotel’s offers by swimming in the pool, playing ping-pong, working out – or pre-testing the quality of the mattresses. 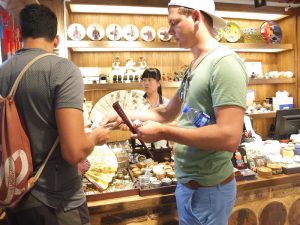 In the evening all of us 26 students (we now are, after Lorenz arrived this evening) went out to the wonderful Muslim Quarter and astonishingly accomplished to stay together most of the evening. 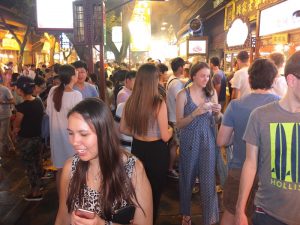 Some moved on to check out the club „Muse“ (a hint of two twin-dressed Englishmen…) – a mad, noisy spot, which was fun for about one hour. Not being able to read the drinks menu properly and communicate with the bar personnel ended in only ordering two beers per 8 students. Sweaty and a little step closer to deafness – but still in a good mood – we let us drive home by two rickshaws. Xi’an had delighted us and we were looking forward to another day in this great city.

(This article is not censored.)