For the last day we arranged three visits, which meant, that we had to stick to our tight schedule for the day. Having left the hotel on time, we arrived at the Vietnam Singapore Industrial Park (VSIP) after an hour bus drive. We were warmly welcomed by Mr. Binh who is part of the marketing division team of VSIP.

The visit started with Mr. Binh showing us the showroom of the VSIP and giving us some information and facts about the history of the VSIP. The VSIP was established as a Joint Venture between Becamex and Sembcorp. Becamex is a Vietnamese state owned company and Sembcomp is led by a Singapore consorcium. After learning some key facts about the seven Industrial Parks all over Vietnam we headed to the meeting room, where Mr. Binh gave us a better understanding of the strategy and the state of development for all of the Industrial Parks. 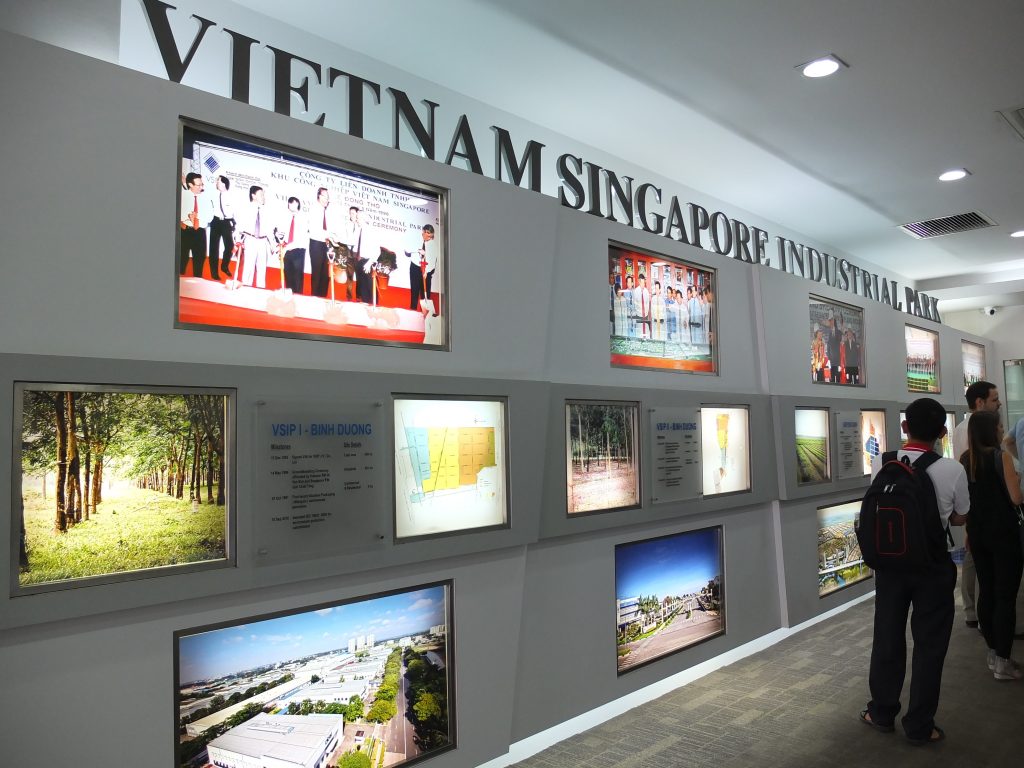 The VSIP tries to attract companies with tax incentives. The VSIP in Bonh Duong, which we visited, is  already housing over 200 companies. After visiting the High Tech Industrial Park in Xi’an it was interesting to see a more developed Industrial Park in terms of company-acquisition. It was surprising, that VSIP accommodates only 13% of western companies, whereas we learned in the last 2 weeks that more and more companies prefer Vietnam over China because of the lower labor cost. 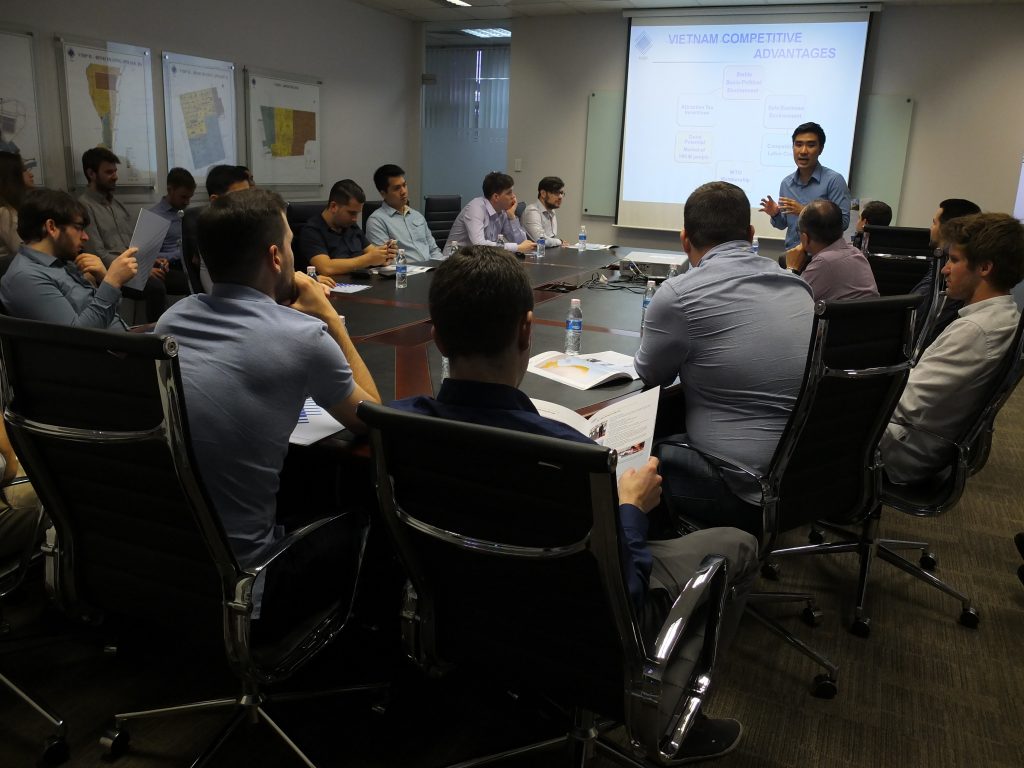 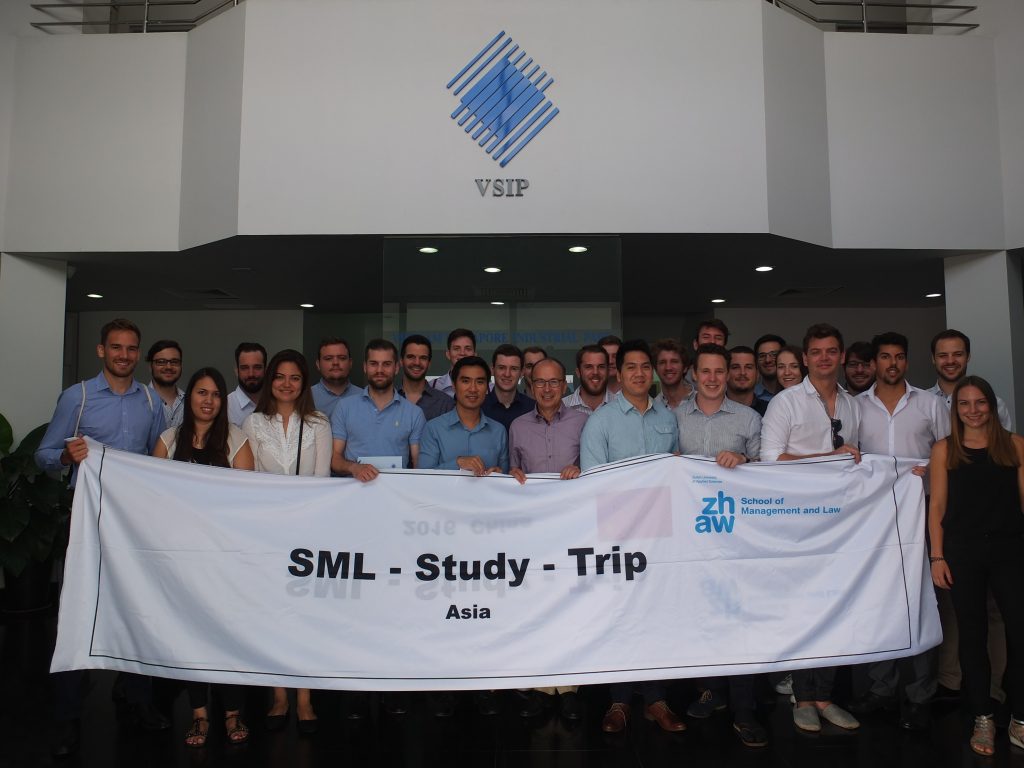 After the presentation we had to get on the bus quickly. Our next stop was the TDT University which was located on the other side of the city. Having arrived a little bit too early on the Campus we were warmly welcomed by Ms. Ngyuen and Prof. Pham director of the banking and finance faculty. They directed us to a dining area, where we had a great lunch organized by the University. Strengthened from lunch and coffee we headed out on a tour around the campus. It was unbelievable how big the campus really is. It even has it own streets and a football stadium with a capacity of over 7000 people. The highlight of the campus tour was a visit in the huge indoor hall of the TDT University. Fortunately for us, a welcome-party of the freshman was taking place. We were asked to have a a seat on the stand and got announced by the host of this event. The crowd was on fire because of the appearance of the European guests and we were stunned from the sheer excitement of the freshmen. The host of the event adapted very quickly to the situation and called us on stage to play a dancing game with the freshmen. Although nobody understood the rules of the game it seemed like everybody had a lot of fun. 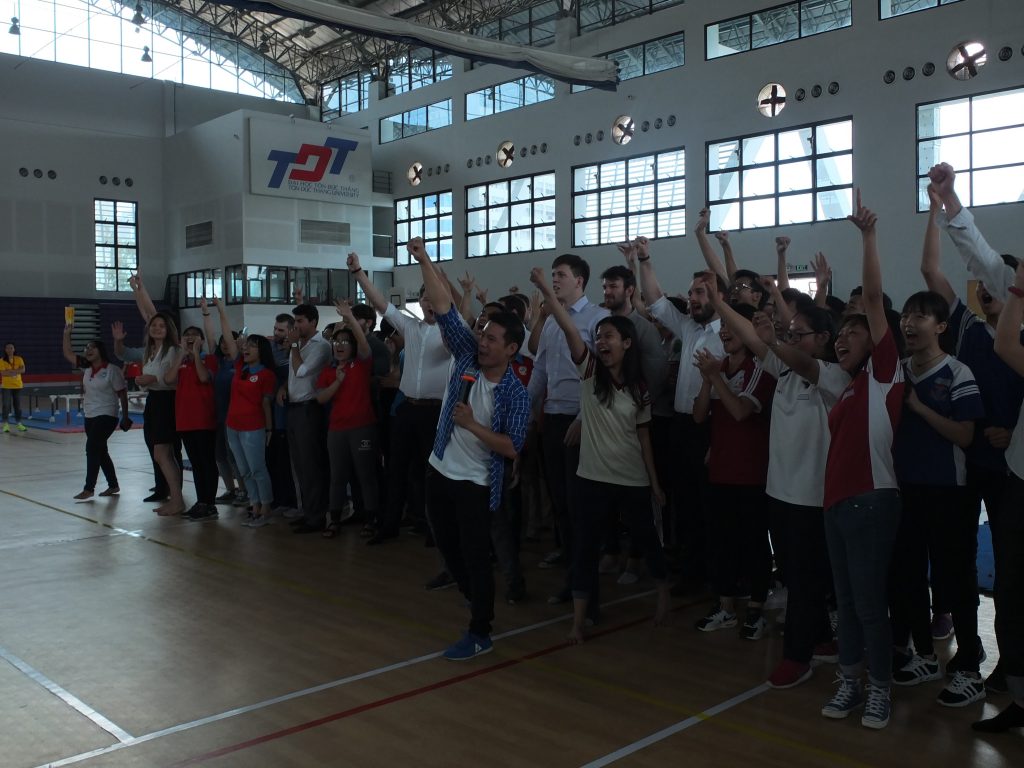 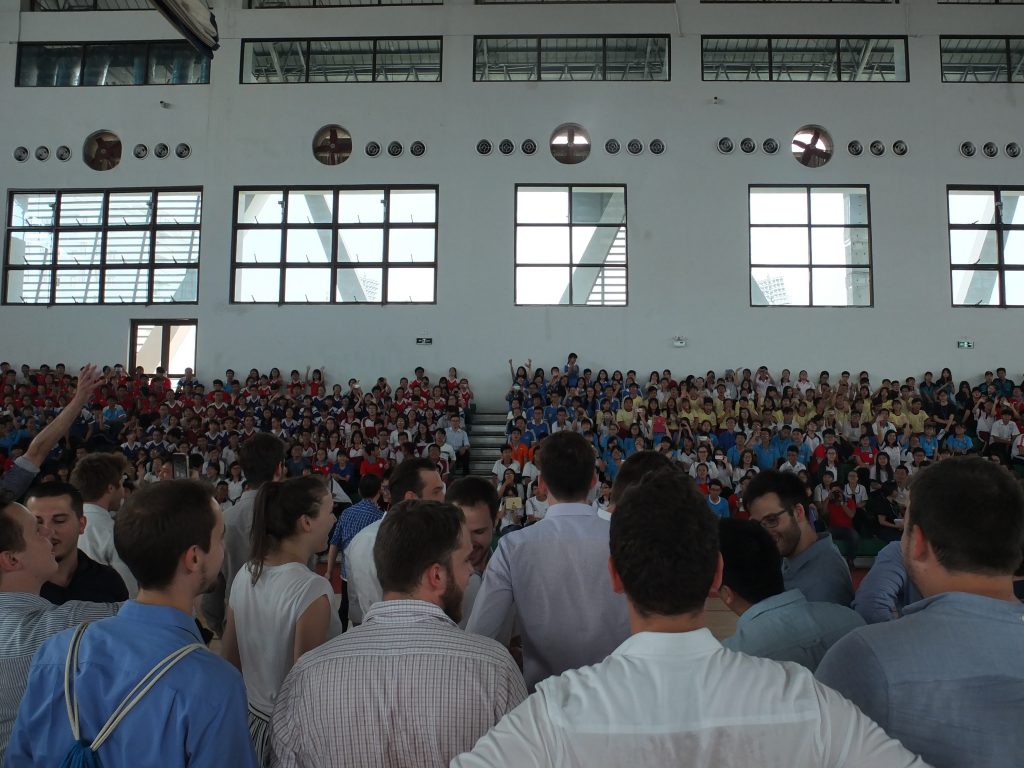 As we left the freshmen introduction we found our way back to the university buildings, were several volunteers had prepared a presentation. The international volunteer students started their presentation and told us something about the campus and the student life at the TDT University. Another presentation was hold by a student of TDT University. We learned something about the young banking and finance faculty as well as how business in Vietnam takes place. Now it was our turn to get on stage. Our students Fabian Brändle and Phillip Manser gave an insight of Swiss-Banking. After an interesting Q&A session, Anh Dung Phan attempt the stage to say thank you in Vietnamese. He probably overrated his language skills in the opinion of Prof. Pham. We suggest that he works on his languages skills before coming back for another visit 😉 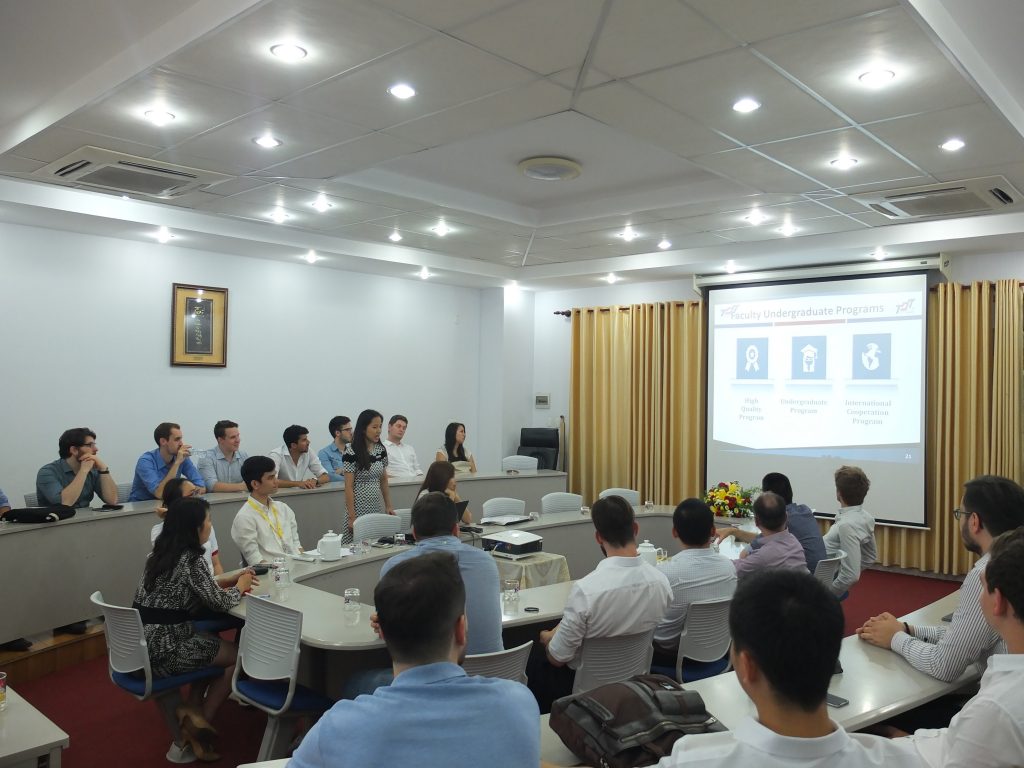 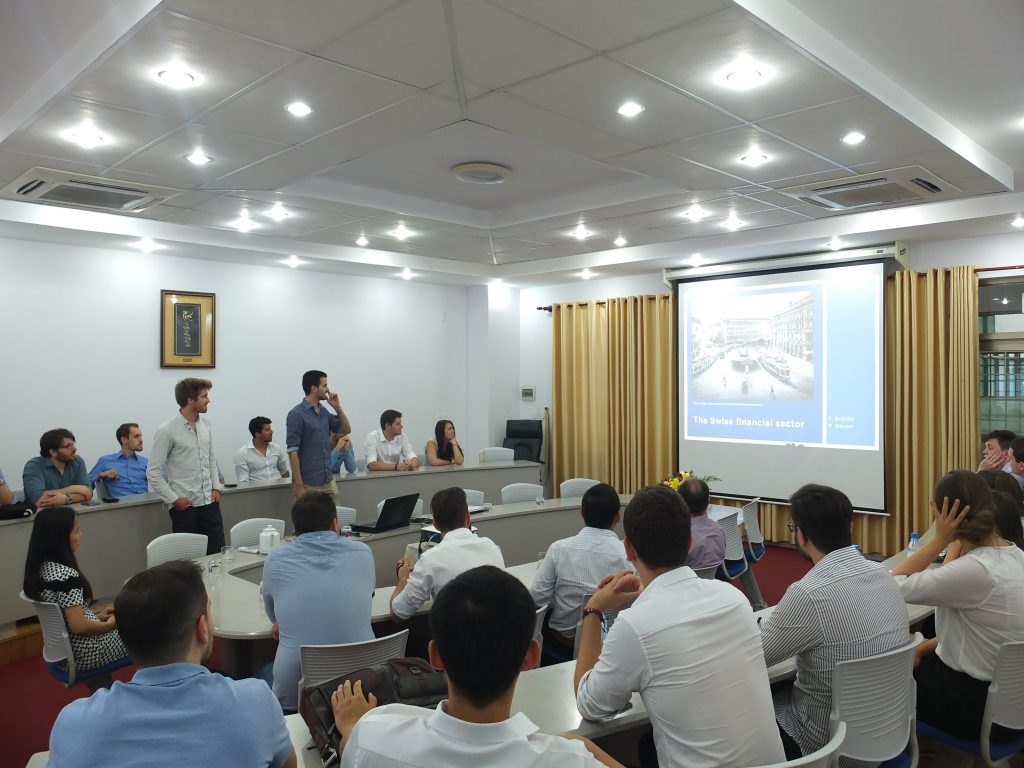 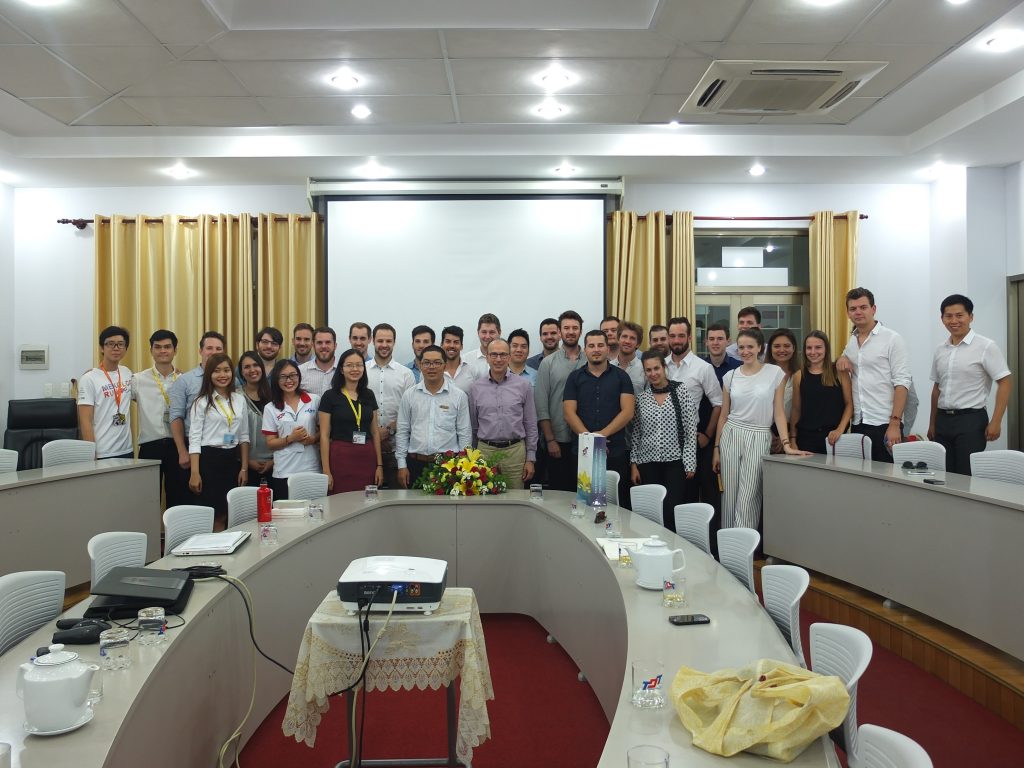 The last and final company visit of our study trip was Dan & Dan, which is a Joint Venture of Andy Mannhart. We were warmly welcomed by Mr. Dan and his family. He showed us his show room which expanded on three floors where he gave us some interesting information about his products and how it is to do business in Vietnam. Due to the bad weather, we were not able to get on the roof garden of the building. An alternative was found in the building next to the showroom which provided a bit more space for all of us. Mr. Dan was very kind and open minded regarding the Q&A session with us. We learned a lot about doing business in Vietnam and the evolution of Dan & Dan as well as his upcoming expansion plans. 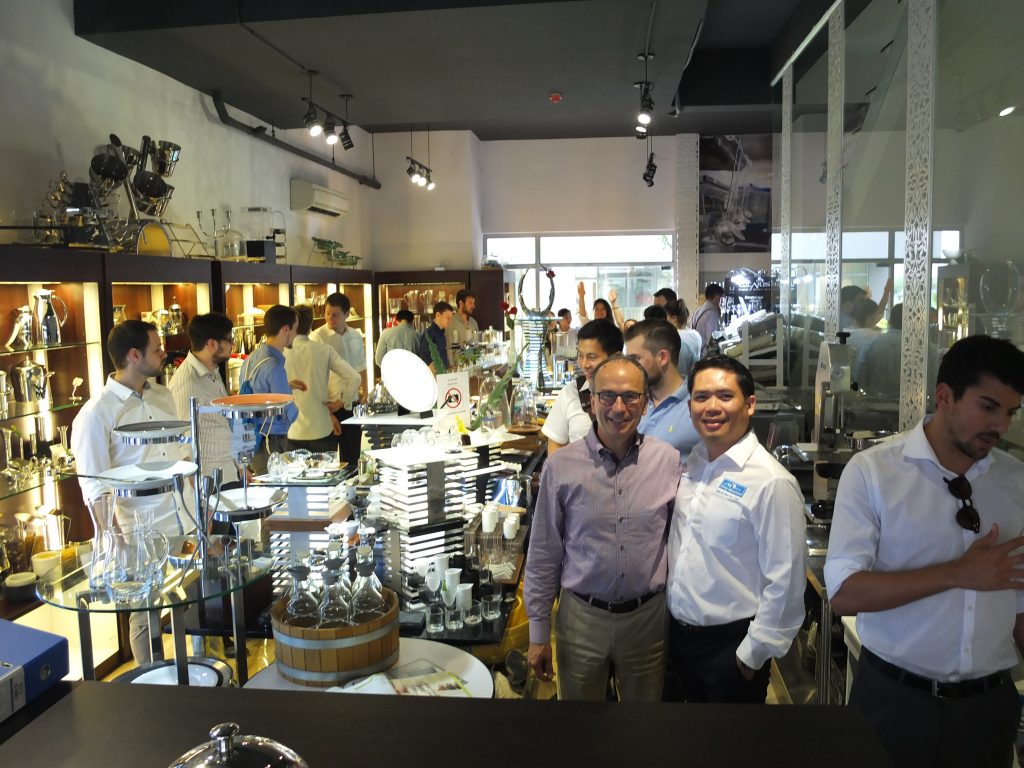 The Q&A Session with Mr. Dan was highly interesting and interactive, but the highlight of the visit was the dinner Mr. Dan invited us to. Even if we had some problems getting to restaurant because of a bus breakdown – probably because of the great short cut we took on the way to Dan & Dan – the mood was great within the group. Mr. Dan was so kind and arranged a restaurant nearby, ordered the food and told us some interesting stories. After dinner we unfortunately had to wrap up the visit with Mr. Dan and his daughter, as we had other plans for the night. 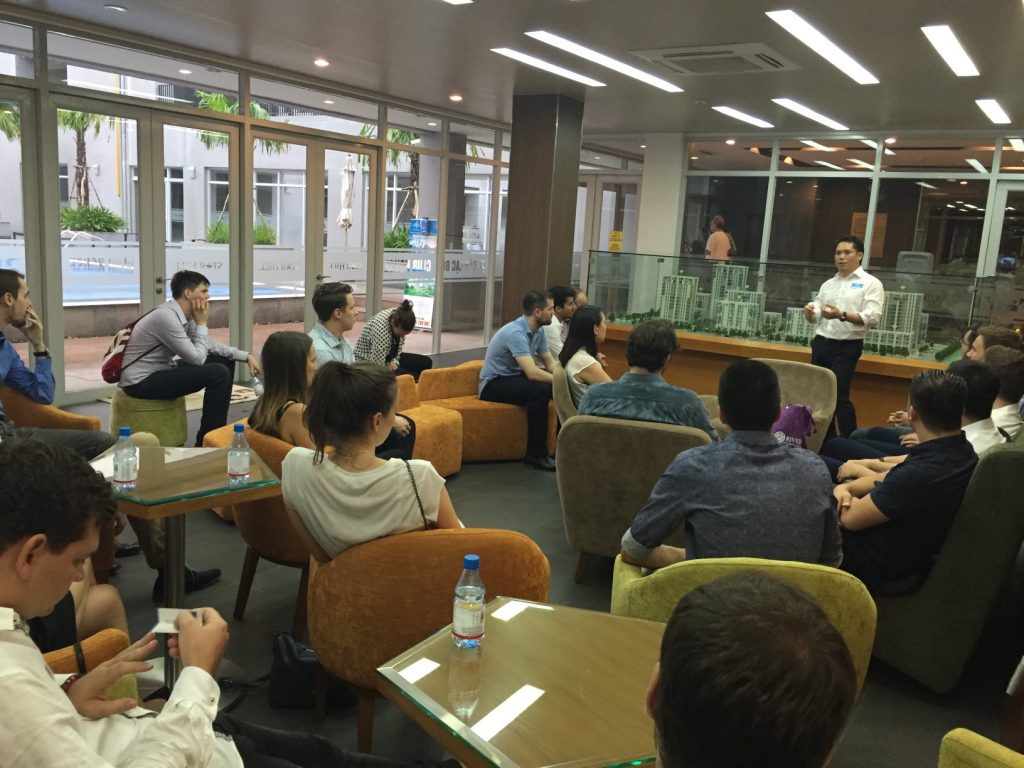 Equipped with a new bus we headed back to the hotel. After realizing that we finished our last company visit, the whole group switched quickly in party mood. Our student Christian turned into DJ Capelli. He took the microphone and played some music while holding the phone next to it. Everyone was singing and cheering to pretty embarrassing music. Our guide Thanh probably never experienced such an orchestra in his bus before.

After a short break to pack and prepare for the next days in the Mekong delta, everyone headed out to the pub crawl. We warmly welcomed Mr. Braun and Wei in our little group who were keen enough to join us for some party time. After a short walk we arrived at the bar “Lost in Saigon” were the pub crawl had its origin. We stayed for a solid our and enjoyed free beer and the occasional shoot. Everybody had a good time and was ready to march out. Pup after Pub we found our way through the Ho Chi Minh City nightlife, a worthy and eventful ending of our field trip. 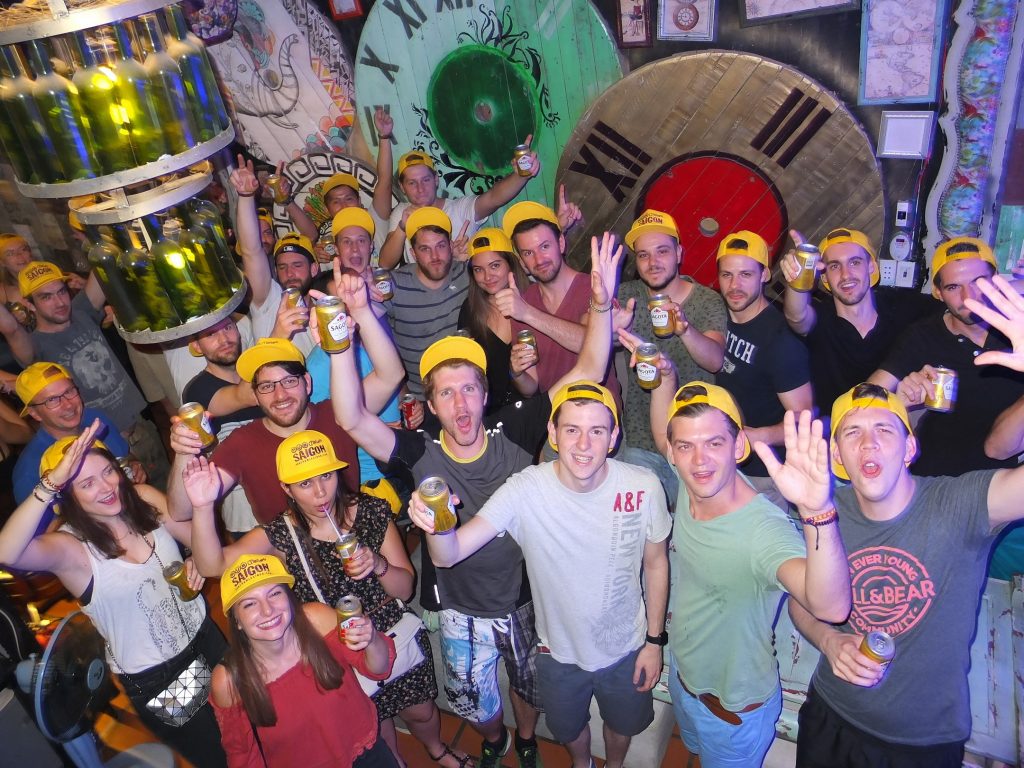