For the third day in Beijing we visited the reinsurance company ‘Swiss Re’ in the heart of the city’s financial district. With regards to the lack of sleep of which most of us were suffering from, the welcoming Starbucks coffee at the firm was not only a nice gesture, but also highly required. At Swiss Re a motivated team presented us the firm’s history underlined with the milestones of the company. To my surprise the company’s loss of money caused by the San Francisco earthquake actually fostered the positioning of Swiss Re by gaining worldwide recognition. Other presentations focused on themes such as the OBOR initiative, food safety and the insurance situation of China where we were hit with a vast number of figures. Afterwards, we were invited to discuss China-related topics in groups along with an expert from the Swiss Re team. Overall, the visit was short but nonetheless insightful. 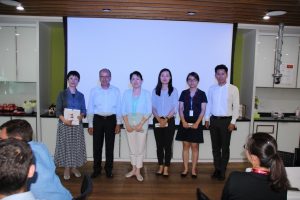 In the afternoon, Mrs. Claudia Masueger was kind enough to inform us on ‘Cheers Wine’ – a wine reseller that conquered Beijing with affordable, yet qualitative wine. Although a bit skeptical in the first place (due to the run down real estate), we were impressed by the professionality and innovation with which the business is run. In order to get a taste for the quality of ‘Cheers Wine’ a little degustation along with chicken feet and tongue (!) was set up. The saying ‘the eye eats with’ probably explained our conservative appetite, however, it made the event even more memorable. 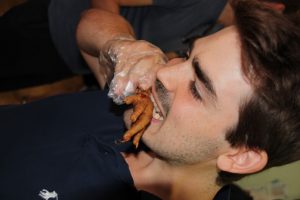 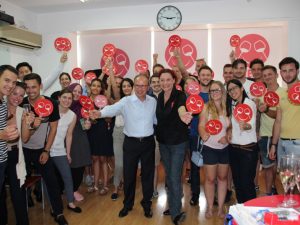 Off program we then decided to make up the omitted meal by going to an all-you-can-eat Tepaniaki restaurant. The food became secondary when we realized that we are proud owner of fake money and must have been tricked by a vicious hotel employee. However, to quote Way: ‘This is China.’