Friday 8th September was the fifth and last day of our study trip in Vienna. We started the day with a feedback session, where the students of the Msc in Business Administration with a Specialization in Public and Non-profit Management could provide both positive and negative criticism of the past week.

Our first stop of the day was a presentation of the main priorities of the Federal Ministry of Science (BMWFW), Research and Economy by Magister Dr. Iris Rauskala. She is a former colleague as she worked as a lecturer project manager from August 2011 to August 2015 at the ZHAW. She is now the head of the forth Section called “Science and Research”. 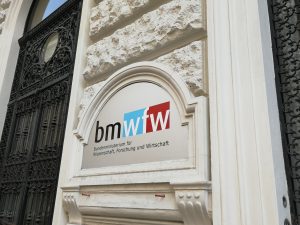 Dr. Rauskala talked mainly about the financial management in the university sector. There are 22 public universities, 21 universities of applied sciences and 12 private universities. The last ones are not financed by the federal government but stated at local government. In 2016 there were about 350’000 students enrolled in all three types of universities. In 10 years the number of students increased about 150’000, which shows the commitment to the territorial sector of the government. Therefore, the student-staff ratio increased as seen in the second figure (Blue line: Number of students in examination; Red line: full time professors) 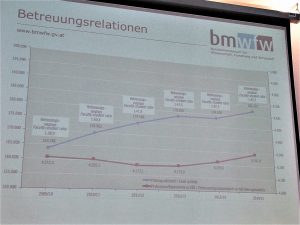 Dr. Rauskala explained that in 2002 a law was passed, which increased the autonomy of the universities. They are now able to choose their top administrators and professors without needing permission from the BMWFW to do. Student fees were mostly abolished and universities have no entry restrictions (universities of applied sciences have then tough) expect for majors like medicine and art.

One of the top challenges of the BMWFW is that there is not enough money available to finance the huge increase of students by hiring more professors and infrastructure needs. On the other hand, if entry restrictions were adopted in all universities and for all majors, student numbers would decrease and youth unemployment would go up.

The BMWFW finances universities with a so called global budget. Universities then decide by themselves how to spend that money. The BMFWF is not able to in fluence how the money is spent, although a top priority would be to increase the number of graduates in STEM (science technology engineering mathematics) majors.

Dr. Rauskala stressed that without political will nothing can be achieved. 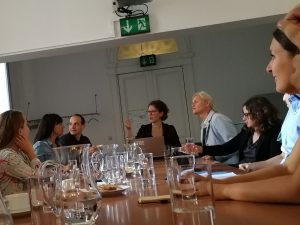 After the presentation, we went to our last stop of our week in Vienna. We had a delicious farewell lunch at the restaurant “Mariahilferbräu”, where we had also started the study trip on Monday morning. Then it was time to say goodbye to the beautiful city of Vienna and go back to Switerland.

We enjoyed our very interesting study trip tremendously and learnt a lot about the digital agenda of Vienna, e-voting, public finances and resource allocation.