The day began with a visit to the ABB headquarters in Doha, Qatar. We were introduced to their daily business operations, from a technical as well as general perspective, and informed about several facts and figures surrounding the company in Qatar. Furthermore, the study group was allowed to ask questions. The questions mainly concentrated on human resource issues, such as payment structures or the difficulty of finding a suitable Qatari-national workforce. 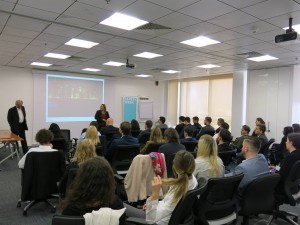 After the company visit at ABB in the city center we started heading to Qatari Diar, which is the Real Estate Investment Company fully owned by the government and a major player in the global real estate market. Launched in 2005 it has its headquarter located in Lusail, a outerskirt of Doha close to the Qatar University. We were warmly welcomed with fresh fruit juices at the visitor center followed by a brief video showed in the cinema hall, which gave us an overview of the company’s worldwide present and future projects. Qatari Diar is engaging in the planning and building of entire quarters of luxury residential areas. It is currently investing in 49 projects in 29 countries including Qatar, Egypt, Sudan, Montenegro, the UK and various other locations with a combined value of over US$35 billion. The company is also present in Switzerland as the owner of the prestigious 150-year-old establishment Hotel Schweizerhof in Bern. Qatari Diar’s business model and vision is dedicated to realize Qatar’s National Vision 2030 for a “beatifully build environment, new sustainable communitites and developments that catch the imagintaiton of a world audience“ to life. After this great introduction followed by a Q&A session we were able to witness how “the Art of Real Estate“ comes to life by a guided bus tour through Lusail City, not only the first but also the company’s flagship grand scale project in Doha. This self-contained and comprehensively planned city will not only have residential and commercial buildings but a full array of community needs, complete with schools, mosques, medical and sport faciltites as well as a new 7-star hotel in the shape of a crescent moon. More than 200’000 residents will once live in Lusail City’s 19 different districts on the total size of 38 square kilometre. Further, the stadion for the FIFA World Cup 2022, where the opening and closing ceremony will be held, is also under construction in Doha’s new city of the future. After our return to the headquarter’s we left our hosts not only with a gift bag but also with a great impression of Qatari Diar’s vision that fully captured our hearts and imaginations. 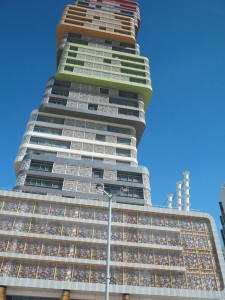 To the interesting question why the Doha bank has given up its “Islamic financial and banking activities” (business activities according to Sharia), considering the Bank’s main business activities in the Gulf States, where Islam is the main religion, the CEO replied saying that the Bank did have both business practices at the beginning, however, at one point they had to decide for a strategy to be taken serious in the global market. Therefore,Dr. R.Seetharaman decided to give up the “Islamic financial and banking activities” in order to operate worldwide. This is now demonstrated with various benches in not only the Middle East but also Europe and North America. The Doha Bank is also an active supporter of the free zone in the Middle East. The CEO is aware about the economic importance of the natural resources and the desired future growth and is therefore highly convinced about the preservation and expansion of the free zone in the Middle East. On top of that, he did not miss to emphasize that Doha is an attractive place for doing business and that they welcome businesses from abroad investing their money in the development of Qatar. This led him to actively encouraging the students thinking about doing business or an intern ship in Doha and outlining various projects the Bank is actively contributing within its financial capabilities.