Today is the beginning of the second part of our study trip which is dedicated to one of the most widely-discussed topics nowadays, namely the DIGITALISATION. Yesterday Pr. Dr. Caroline Brüesch and Dr. Alexander Mertes joined us in Vienna and will accompany us during the rest of our trip. 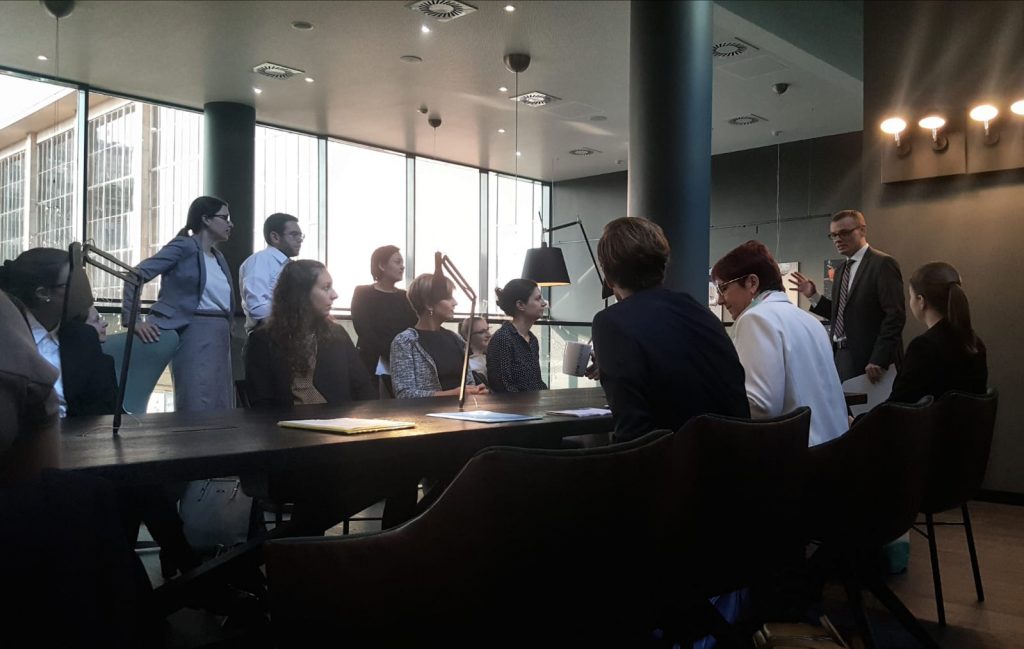 Daily Briefing at the Hotel Motel One Westbahnhof

Probably no other town in Europe can offer you a more comprehensive insight into this topic as the city of Vienna (and if you have doubts about it, just continue reading and they will surely be dispelled before this text ends). 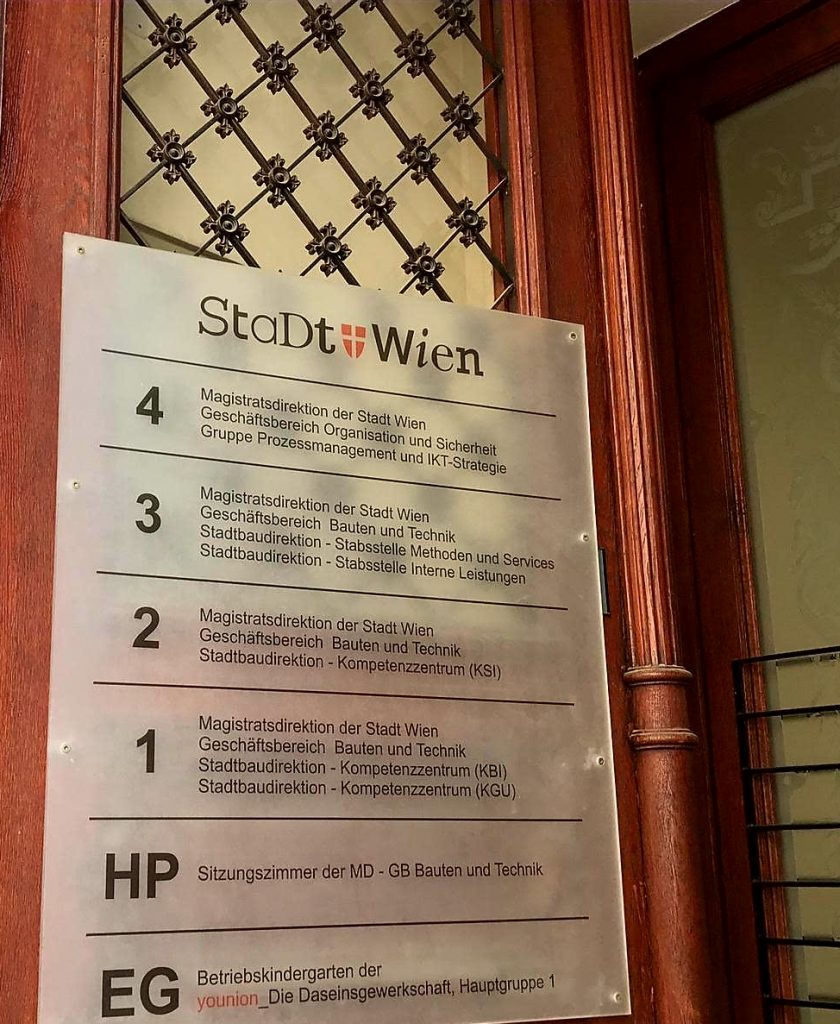 Entrance to the Vienna City Administration

After a usual kick-off briefing at the Motel One we hit the road to the Chief Executive Office of the city of Vienna. It was represented by Thomas Schuhböck who is part of the Executive Group for Organisation, Safety and Security and is responsible for process management and ICT strategy.

Before embarking on the topic of Vienna’s Smart City approach Mr Schuhböck gave us a general overview of the key data on Vienna. Here are some of the most interesting facts:

Then Mr Schuhböck turned back to the actual digital agenda. On average, the people in Vienna are quite well advanced in using the Internet (utilization of the Internet comprises 86%) and they prefer surfing on their mobile devices and not on PCs (the municipality labeled it as the “mobile first” trend). Mr Schuhböck also drew our attention to the fact that the ICT’s added value in Vienna is threefold higher than the added value of tourism. Also, the city of Vienna is supporting “digital salons” aimed at promoting IT themes among women.

During the presentation of Mr Schuhböck

Subsequently Mr Schuhböck moved to the Smart City Wien principles: While the main components of the Smart City concept are quality of living, resources and innovation, social inclusion is crucial. The same emphasis on the citizen’s participation was manifested in Vienna’s digital strategy. According to Mr Schuhböck, it is the first digital strategy that was developed together with citizens. In a first step, an Internet based participation platform was created in 2014 in order to involve citizens in the idea generation process. In a second step, the conceptualized ideas were presented to the public for discussion. Because as Schuhböck put it, “an informed citizen is a satisfied citizen”. The finalized strategy was published in June 2015.

To demonstrate the concrete output of Vienna’s digital strategy, Mr Schuhböck highlighted a couple of “lighthouse” projects. For example, “Sag’s Wien” (or for anglophiles “Tell it Vienna”) was established to report defects which Vienna people spot on the street; DigitalDays2018 was created as a coordination platform for Vienna’s citizen-oriented participatory activities.

And the concluding message and a personal “lesson learned” from Mr Schuhböck: Don’t be afraid to launch a project even when it’s just 80% ready. People will be there to help you fix it.

Does E-Voting Have a Future in Austria?

The focus of our afternoon programme was the future of e-voting in Austria.  We went to an outpost of the Federal Ministry of Interior where we were welcomed by a very enthusiastic Mag. Robert Stein, head of the Department III/6 for Electoral Affairs, and Renate Strohmaier, Senior Specialist for Electoral Affairs. With his witty comments Mr Stein instantly managed to raise our interest in the topic. After a brief intro to Austria’s federal system, he dwelled into the specific features of Austrian electoral processes. He explained that the principles of Austria’s electoral legislation are stipulated in the federal constitution and therefore must be applied in every federal state and municipality. One of those principles states that a citizen must cast her/his vote in the presence of an authority representative or per post (postal vote was introduced in 2007). This means that in order to introduce any e-voting system, the Austrian constitution would need to be amended, which would require a two-third majority in the Parliament. Since this majority hasn’t been secured yet due to controversial and sometimes opposing views of Austrian decision-makers, there is no legal basis for e-voting in national and local political elections, Mr Stein concluded. He mentioned the Austrian Students’ Elections (2007) as a pilot project to test how an e-voting system could be implemented. The Constitutional Court ruled in 2011 that the legislative implementation of e-voting was in compliance with the constitution, but high standards must be fulfilled. 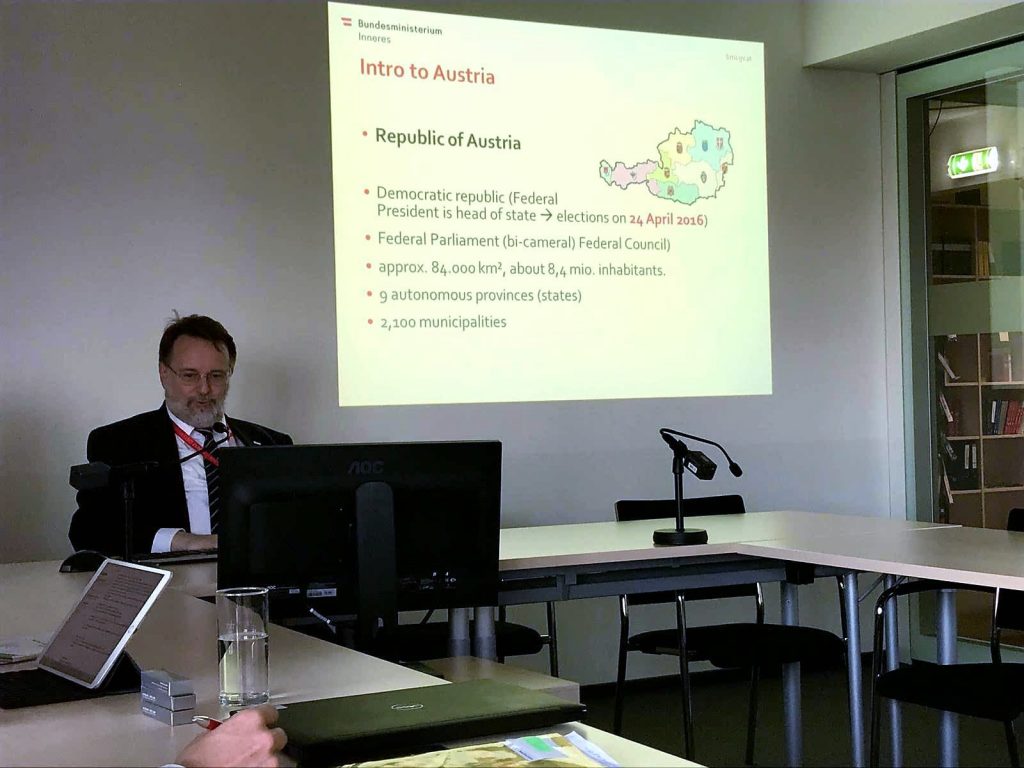 During the presentation of Mag. Stein at the Ministry of Interior

Regarding the outlook for e-voting in Austria, Mr Stein argued that the introduction of an e-voting system should still be possible in principle. Should the law-makers now decide to introduce it, one requirement would already be satisfied as an Electoral Register was established in Austria in 2016. However, e-voting still faces fundamental challenges. For example, there are still concerns over the issues of one-to-one identification and data protection.

Another exciting day has come to an end! To be continued…