The day began early in the morning, 7.00 h was the time of departure. Luckily everyone was excited to visit Almarai so “rise and shine” was an easy task. We embarked the bus leaving for what was planned to be a one hour journey to Almarai, the largest dairy production site in the world.

The day took off well, but alas, soon a first inconvenience overshadowed the trip – the air-condition of the bus suddenly failed to deliver the much appreciated cool air. The heat in the bus might have been a reason for our driver to lose his way which manifested in the trip taking two instead of one hour. Nevertheless, spirits were high and upon arrival our engineering friends Marek and Thomas managed to fix the air-con with support from Hubi. 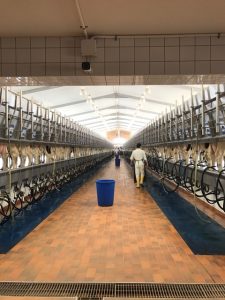 We were welcomed by Tony the head of farming who led us through the plant explaining the struc-ture and processes. You could immediately tell how passionate he is about the animals and his work. With his team, he takes care of 190’000 milk cows. 300 cows are milked by machine per 20 minutes – 4 times a day! They are fed with alfalfa, yellow corn and nutrients added to their diet. The food is kept in separate stock entities to prevent spread in case of a fire. The cows are not fed any antibiotics to produce more milk, but the cows are sold after about 3 years after their peak in milk production is reached. Almarai focusses purely on milk produc-tion which is why the cows are artificially insemi-nated and bulls are sold shortly after being born.

Despite the mass production the Almarai cows seem to lead a fairly humane life. Tony referred to them as “she” rather than “it” and workers are asked to treat the animals gently and “not shout” at them on instructional posters. All the same, one has to ask how sustainable is it to breed, feed and milk cows in the middle of the desert where food and water are scarce and has to be imported on a daily basis. Fact remains that Almarai seemed to be a healthy business with even more potential for growth which is being carefully evaluated by CEO Georges Schorderet.

The immensity of Almarai does not consist of the dairy production only. We moved on to another pillar of production – the bakery. There we were welcomed by Simon, the head of production for baked goods who again displayed a contagious excitement for his production. 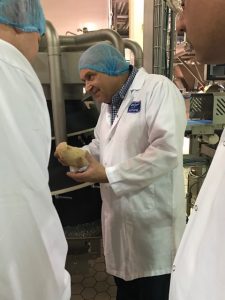 We learned how buns, rolls, sliced bread, and croissants are produced from making the dough to packaging. Most importantly we learned about the delicacy of dough because of its one living ingredient – yeast. As a special treat, the two ladies in the group, Sabrina and Susanne, were invited to inspect the ladies division in croissant production. Almarai employs astonishing 900 female workers which are shuttled to the production plant everyday separated from their male colleagues. These are the first effects of the efforts Saudi Arabia is making towards the integration of females into the workforce. However, questioned regarding fitting positions in higher positions, we are told this is not possible as long as segregation of the sexes is part of daily life in Saudi Arabia. 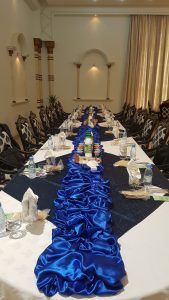 After this fascinating tour of the bakery facilities, we were offered a delicious buffet lunch. Not only was the food – again – outstanding but also the facilities we had lunch in were high class, with chandeliers and ample decoration.

We were joined by Swiss CEO, Georges Schorderet, and three of his senior staff, two of which were from New Zealand, Australia respectively and the third was Saudi. 25% of employees at Almarai are Saud 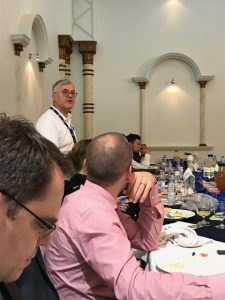 is whilst the rest come from all over the world, predominantly from English-speaking regions.

After lunch, we followed David, the head of dairy, to a screening room where we were shown the company video summarizing all that we had seen in the morning. David then took us to a gallery were all Almarai facts and figures were displayed and windows into the cheese production facilities rounded off a most interesting site visit.

On the way back to the hotel, in a cooled bus full of tired EMBA students, the traffic ate up the free time scheduled before the evening program.

A refreshed and revived group reassembled at the lobby at 19.15 h to attend the Swiss Ambassadors reception and dinner. We were welcomed by the Embassy’s delegation in the beautiful garden of the Ambassador’s residence. After some welcoming words from the Ambassador congratulating us to our trip to Saudi Arabia. Members of the Clyde & Co law firm informed about the remarkable opportunities that the change in the country has brought in relation to the 2030 Vision. Following that short introduction, we had the chance to speak to several guests and of course his Excellency himself, Ambassador Heinrich Schellenberg. Throughout the evening we could not repeat often enough how our kind hosts, Mr. George Schorderet and his Excellency Heinrich Schellenberg have made this visit to Saudi Arabia an unforgettable experience for all of us. Thank you! 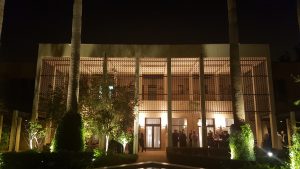