The last day in Shanghai started with some heavy lifting. Luggage was packed and gathered in the hotel lobby, which ended up being open to exhibition for quite a while, since the local bus driver seemed to be unfamiliar with Shanghai’s morning traffic. Overall, the concept of time seemed to be not very well understood by the individual in question. Anyways, after our obligatory contribution to climate change and more specifically Shanghai’s lovely grey smoggy sky, we reached our destination at Autoneum. The friendly plant manager greeted us and provided us with a detailed presentation about Autoneum and its Shanghai plant. After multiple attempts of the plant manager in drowning the students in technical details and information nobody would ever even remotely remember, Mr. Braun skilfully stepped and sweet-talked the manager into leaving out some of the specifics. However, salvation lasted only briefly. As the plant manager finished the presentation he passed on the word to one of his employees, who provided us with a rather similar presentation. Of course Mr. Braun saved the day a second time and we were finally taken on the tour. The production facilities looked very organized and well structured. Clearly, the process of preparing and cutting the isolation materials is not the most complex, but it was still very interesting to see how people worked in the factory. One of the most interesting insights gained was that most of the machinery used was mostly produced in China. Only high precision instruments were imported from Switzerland or Germany. This greatly indicates how rapidly China’s development even in producing machineries has progressed. After the tour, gifts were presented, group photos were taken, roundhouses of applauses were given and an engine was ignited. 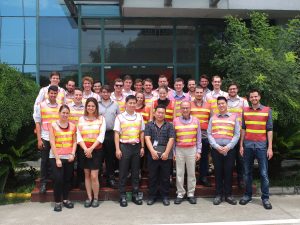 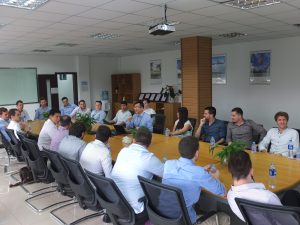 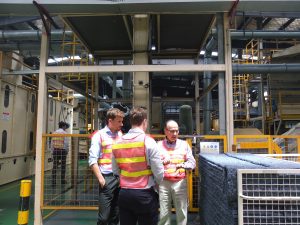 I would have been mean to question the drivers’ time perception skills only for being late in the morning. It also might have been our CTO’s planning that was not as meticulous as he thought it was, but censorship is a local custom and of course we adapt. Arriving about an hour late at Huber and Suhner the group was greeted by some paparazzi. Somewhat starting to get a feel of why certain stars get annoyed by being photographed all the time, another group picture was taken. Multiple attempts later, the students joyously devoured their surprisingly tasty pre-ordered pizzas and were finally ready to rock’n roll. The tour commenced and was extremely interesting. Although the guide spoke in riddles, it was fairly obvious how well structured and organized Huber and Suhner’s facilities are. But the real highlight came after the tour with the presentation of a guest-lecturer organized by Huber and Suhner. The Chinese native, who obtained his PhD from HSG, provided an exceptional presentation about the economic situation of China. It was impressive to see how critical he discussed the topics at hand and how freely he spoke about negative aspects of the Chinese macro environment. 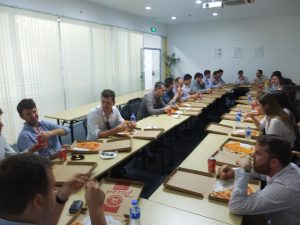 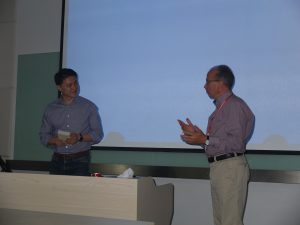 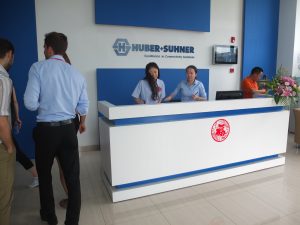 After a diverse Chinese dinner, the group of now past-tofu-lovers (if you ever see brown tofu… just don’t) headed towards the train station. The sub-sequential embarking of the train was a true success and a lively group of students established a cozy atmosphere in their wagon. Also, the rules of UNO proofed to be a quite challenging to certain individuals from Appenzell. Regardless, the train ride was a joyous experience and everybody reached the final destination save and sound. 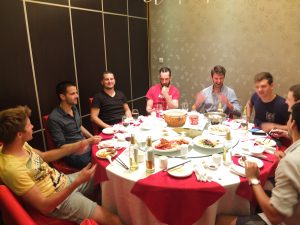