We met today at 9 a.m. to get a briefing of today’s program from the responsible study group. The group gave us a short overview of the ministry and compared the Austrian army with the Swiss army. We heard that although the two countries are about the same size and population Switzerland (5.1 bn) is spending roughly two times the budget of Austria (2.1) for its army. The same applies for the number of soldiers. The armed forces of Austria include 55’000 persons, whereas the Swiss forces include 124’000. Looking at the number of fighter jet Austria owns 15, Switzerland 54. The group ended the briefing with a look on the current focal points of the Austrian military. One is the challenge that came with the immigrants from Syria in the last two years, the other is that the army aims the get more female soldiers. The group showed an old promotion video for female soldiers that was both funny problematic from a gender perspective.

At 10 a.m. we were welcomed by Mag. Dr. Iris Rauskala at the ministry of education (unfortunately, for security reasons we were not allowed to access the Ministry of Defence and Sports buildings) and could enjoy an interesting lecture given by General Lieutenant Mag. Franz Leitgeb. He is a top military leader and responsible for budgets and resource planning. 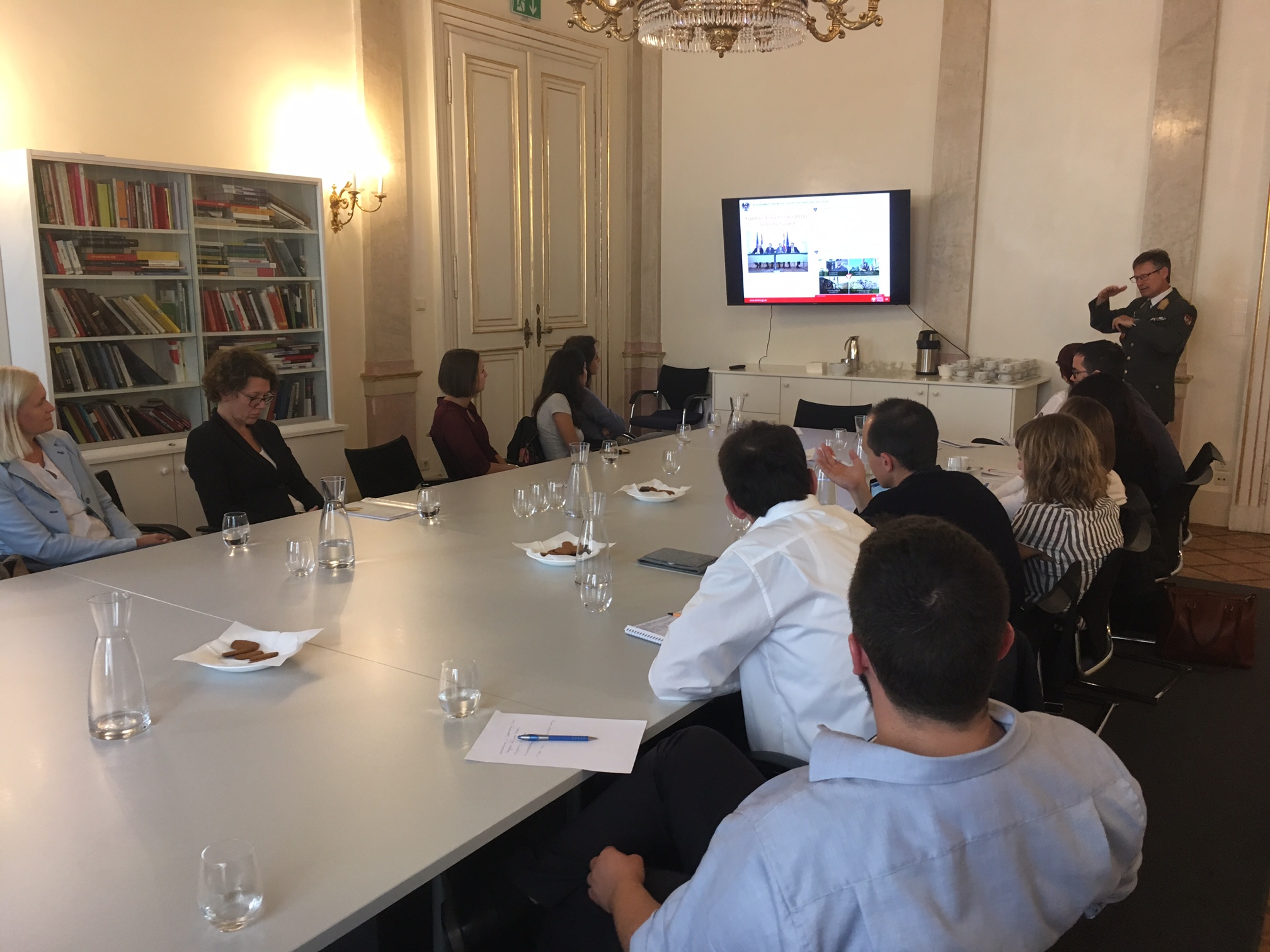 After introducing himself he talked about the budgeting and planning processes at the Austrians ministry of defense. In recent years, the army and other ministries changed their resource planning from an input oriented planning to an output oriented planning. What does this mean? A typical input target is to have e.g. 1’000 soldiers over a certain time in a certain region. This is easy to evaluate but it’s hard to say what your actual impact is. A typical output target is to foster peace and democracy in a region, aiming to establish a stable state and democracy in five years. Once the targeted outcome is given it is needed to plan the necessary measures to get there. It has to be defined what all the lower hierarchical levels have to do, so you get the requested outcome in the end. The concentration on the output makes more sense from a planning and managing perspective. The problem is, that it is much harder to evaluate.

About the budgeting process General Lieutenant Mag. Franz Leitgeb said that they have introduced a rolling 4 years budget. Every year they make a budget for the next 4 years where only the first year is fixed and the following years might be adapted later. Nevertheless, this gives a much higher planning security, which is needed for the long-term investments.

In the following discussion, he further mentioned that he appreciates the possibility for making reserves if a certain budget isn’t fully used. He additionally spoke about the recent growth of the budget after a long period of decreasing budget. The reason for that was mainly the huge number of immigrants passing the border in 2015, when the government of Austria wasn’t able to control them. Besides that, the destabilizing environment in Syria, Turkey and the behavior of Russia had some influence as well.

Further we were discussing the challenge that the army always has to be prepared for the worst case. But at the same time, it is from an economic perspective not possible to run the whole infrastructure you need to have for the worst case in times of peace. 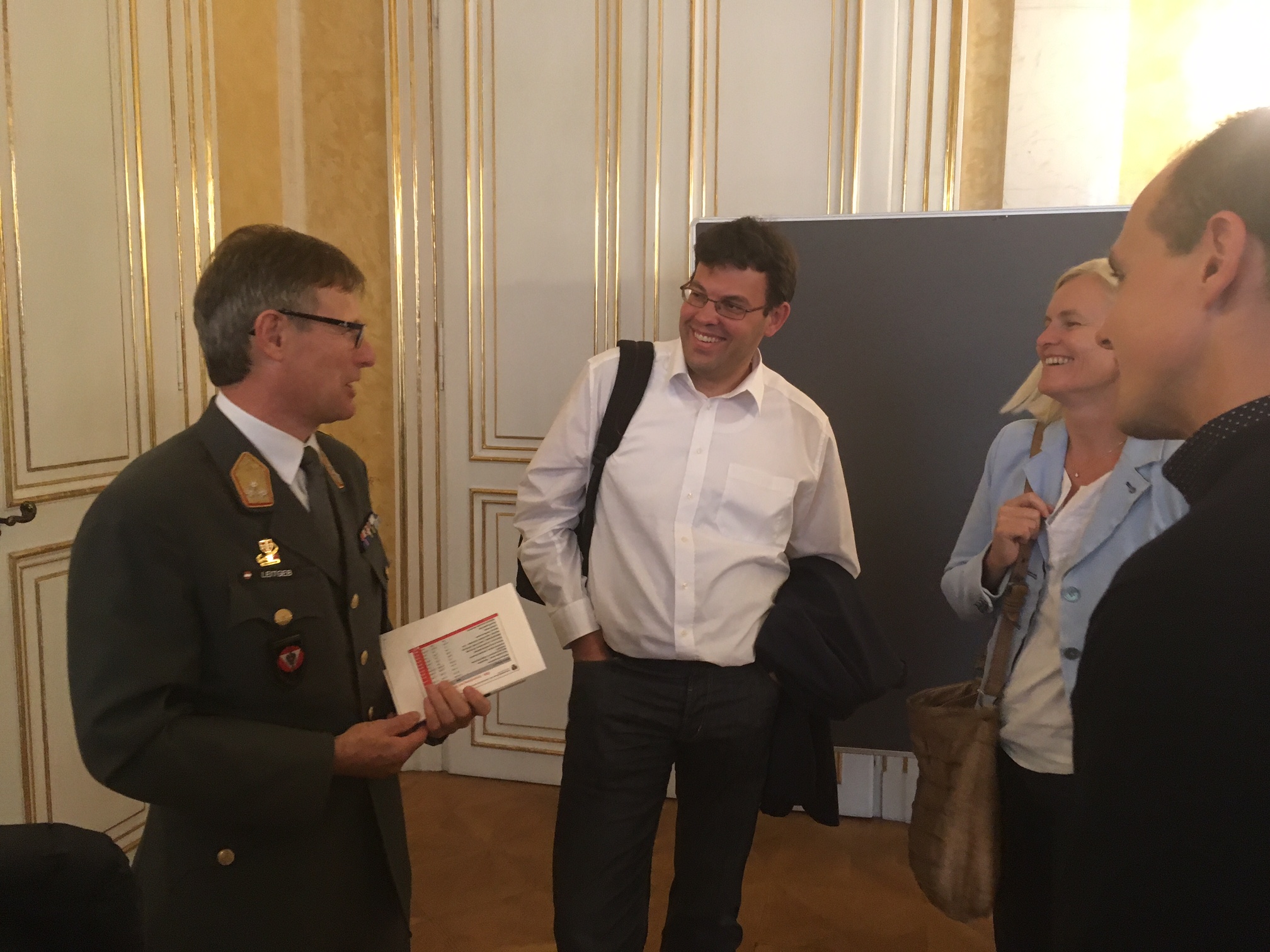