After the celebrated unification of the Field Trip Group 2016 the night before, getting up proofed to be challenging to certain executive members. After a slight delay, the group headed to Swissnex. Upon arrival, the lovely Isabel greeted the group. Up next, an introductory presentation was held by the Swiss consular, which set a rather serious tone. Therefore, the energetic and very sympathetic Romand, Pascal Marmier, who entered the stage afterwards, resulted in a refreshing new environment and provided interesting insights about Swissnex and its team. In a next instance, Fabio Müller from Swiss Global Enterprise brought the student’s attention closer to the trade of goods between Switzerland and China. Most interestingly, they receive about 1000 requests per year, which result in about 40 mandates. Furthermore, he highlighted the regional differences in China and underlined the transforming nature of the market with the rise in labour costs and discussed emerging implications. Certainly, Fabio’s presentation was very insightful, but the presentation climax of the today was doubtlessly achieved by Michael Lehmann. With his natural and exciting presentation style he caught the students’ undivided attention. Also, his personal experiences about the Chinese culture and the corresponding linkage to making business in China were extremely interesting. Particularly, he mentioned the enormous speed at which Chinese people operate and adapt as well as the openness of the elder generation towards new technologies and the ever-changing scenery of Shanghai. Clearly, if someone wants to conduct successful business in Shanghai or China respectively, they need to be fast moving, open-minded, flexible, always keep track of local trends and be physically present on multiple occasions throughout the year. Otherwise, success will be unlikely. 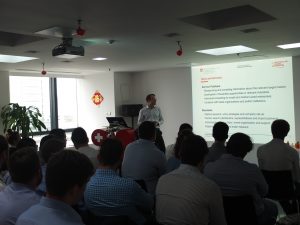 After a nice Japanese lunch, the group met with Professor Guoxiang Huang, his co-workers and some MBA students at Shanghai Jiao Tong University. After a brief introduction about Shanghai involving developments of the real estate market, the transformation from a labour intensive towards a more automated industry and two lengthy marketing videos about the University from the side of Jiao Tong, Mr. Braun took over and introduced ZHAW and Switzerland. In that sense, recent political issues such as immigration, the relationship with the EU and BREXIT were briefly touched upon. Afterwards, the floor was opened to the students, who were then asking questions about, firstly, miscellaneous things like watch prices in China vs. Switzerland. However, the discussion developed and interesting questions about the environment of start-ups in Switzerland were posed. Furthermore, according to the MBA students, China is actively promoting and trying to create an environment for young entrepreneurs themselves. Finally, the knowledge exchange ended with a brief tour of the campus towards the exit of the University. 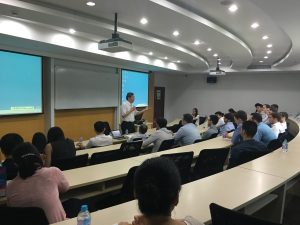 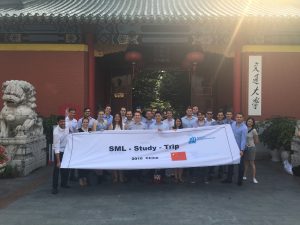 The outstandingly disciplined students behaved and enjoyed the last night in Shanghai without anything in particular worth mentioning. Clearly, everybody was excited about, yet another, very eventful day ahead and decided to go to sleep a little earlier.