Macau is a huge casino town, no question. As Macau, unlike Las Vegas, is not a big party city at the same time, the whole group of students started the day well rested. Due to a change in our timetable we had to leave two hours earlier. The planned sightseeing was cancelled, which was of course a pity. A few impressions of the old town from the times of the Portuguese colonial period would certainly have been very interesting.

The journey from Macau by speed ferry to Hong Kong and from there by plane to Hanoi, Vietnam, went off without a hitch except for some visa discussions at the check-in. And then, finally, we arrived. The first impression was that the traffic in Vietnam seems to be quite chaotic. 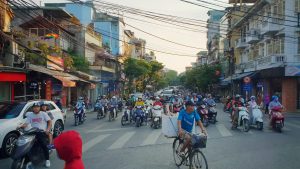 Once we hopped into our organized tour bus, we recognized that the tour guide is working as a comedian at the same time. He welcomed us and entertained us with his funny stories. Mainly he was telling jokes about the negotiations with his wife about the percentage of the amount she receives from his salary. After she gave birth to the second child, she receives 89 percent of the salary – that means the negotiations didn’t go very well… 😉 However, it is indeed the case that in Vietnam women have the sovereignty over the finances of the family. That’s why they are often called “noi tuong” of the family which has the meaning of a “Minister of Interior”. 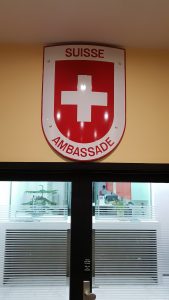 Arrived in the Swiss Embassy, Mrs. Ambassador Maser welcomed us with drinks and biscuits. During the one-hour session at the embassy we received various information and experienced how Vietnam is politically positioned and what the contrasts are with Switzerland. Vietnam has a single-party socialist republic framework and the general secretary of the communist party of Vietnam, Mr. Nguyen Phu Trong, is probably the most influential person in the country. The five million party members of the only party in the country are making all the decisions for the remaining 90 million inhabitants. As the population is relatively satisfied with the current economic upturn, this system remains stable. However, it is quite possible that with the increasing prosperity of the population, as soon as the basic needs are covered, desires for more codetermination will also be aroused among the local population.

The various possibilities regarding business activities in Vietnam and trade agreements were also discussed. In contrast to China, with which Switzerland has a direct free trade agreement, Switzerland has allied itself with the EFTA-countries in order to achieve better results in the negotiations on trade agreements with Vietnam. However, no agreement has yet been reached. In terms of business, Vietnam has a lot of potential since they are a big country with a lot of low cost labor and, as told before, the middle class is growing. In addition, doing business in Vietnam has recently become even more interesting. Due to the trade war of China and the US, product produced in Vietnam instead of China can be exported to the whole world and the still huge US market doesn’t have to be excluded.

At the end of the day, we were able to check into our hotel and the rest of the evening was held individually. Finally, we could rest after the exhausting journey (or alternatively watch the World Cup semi-final) and process the first overwhelming impressions from Vietnam.