Belgium is a country with a strong double identity: Flemish in the North and Francophone in the South. Far from being a mere linguistic distinction, this division is the result of centuries of historical events that gave birth to modern Belgium. Its capital, Brussels, is located between these two identitarian blocks and, also thanks to its bilinguism, it is the essence of the Belgian culture. Here, one can see how the Belgian identity transcends local and linguistic barriers and appears in the most typical, traditional and quintessential Belgian elements of the country’s lifestyle: not only typical products, such as waffles, fries and beer, but also everyday products, such as milk bottles and other staples, are branded with a proudly shown Belgian flag. This can be seen almost everywhere in Belgian shops’ windows as well as in other retail points such as foreign supermarket chains. The following picture was taken in a foreign supermarket chain’s store in downtown Brussels. 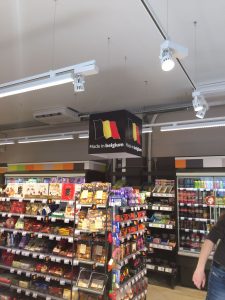 As can be seen, cultural heritage is important because it helps people connect with others who have similar backgrounds and provides a sense of unity and belonging; it may also infuse a sense of quality and excellence of a product. Thus, adding a Belgian flag on a product in tourist areas is an exampe of contextual intelligence in that it infuses a sense of goodness of the product within tourists: be it in supermarket aisles or in more traditional tourists shops, the Belgian flag reassures the customer, even on discounted items, as can be seen here: 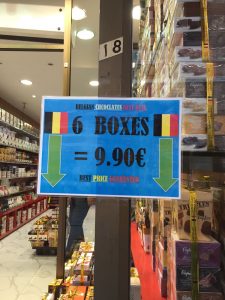 Conversely, the same products are not branded as evidently in less touristic areas as can be seen in the following picture:

Similarly, Belgians are united, despite their cultural differences, under certain habits and traditions, which they value and regard highly. Belgians love to have their fries in paper cones and wouldn’t have them any other way. Selling fries in such containers is another example of contextual intelligence: 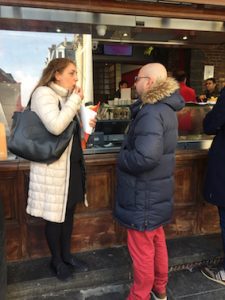 This is also true for fresh seafood, which is often eaten in open air squares in an on-the-go fashion: 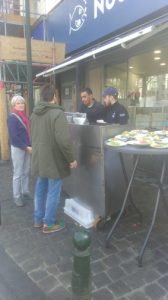 In essence, Belgium with its internal differences and contrasts, can be quite challenging for marketeers; Brussels, with its bilingual, double-identitarian status is the perfect example of the composition of the Flemish and French dichotomy and how it is resolved through contextual intelligence.