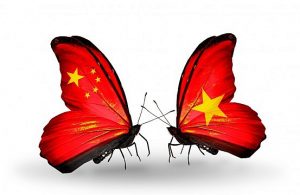 Thanks to its reform and opening-up policy, China has become stronger and stronger in economy, science and technology. The nation’s economy has been growing rapidly, with the GDP dramatically increasing year by year. President Xi Jinping closing remark of the meanwhile famous speech at this years’ Davos WEF summit is leading the way: “We Chinese know only too well what it takes to achieve prosperity so we applaud the achievements of others and we wish them a better future. We are not jealous of others’ success and we will not complain about the others who have benefited. We will welcome them aboard the express train of Chinese development.” China’s economy is gradually shifting from a merely production-oriented to an innovation-led economy. Thus the Chinese markets will continue to open up and Chinese companies will internationalize as Western companies will explore China as a future market and supply source to an even greater extent.

Twenty-five students in their final semester at the ZHAW School of Management and Law (SML) embark on this study trip to China and Vietnam following attendance of the seminar “Doing business in Emerging Markets”. The objectives of this study trip are:

Moreover, I would like to thank the entire student group who co-organized this trip and in particular the core organizing team Beatrice Phua (CEO), Christian Spring (COO), Andrea Cavegn (CFO) and Andrin Wilhelm (CTO). We are all looking forward to this no doubt extremely rewarding and memorable journey.