The second day of our trip on Tuesday September 5th, started at the hotel lobby with a short group briefing about the topics ahead. At our first visit, we were introduced to two subjects related to the Smart City Strategy Framework of Vienna. The department of organization and security deals with the “Digital Agenda” of the municipality of Vienna. 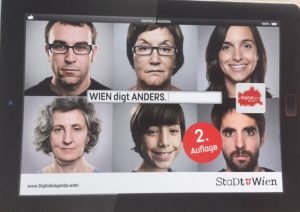 Dipl. Ing. Birgit Lutz and MSc Thomas Schuhböck gave us deep dive into this topic. The Digital Agenda is an initiative derived from the “Smart City Strategy 2050” aiming to cope with the future digital challenges Vienna will encounter. The initiative was kicked-off by the municipality of Vienna by inviting and encouraging not only private companies and the people of Vienna but also everyone to participate and come up with innovative ideas. 172 ideas were submitted and condensed by several task forces into five fields of action, which were outlined in a strategy paper. Subsequently, the strategy paper was again steered by the online community. After all inputs, options and comments were incorporated into the strategy, the final version was published in July 2015. Seven lighthouse projects evolved out of this process mainly focusing on mobility, health and e-government.

Through this lighthouse projects the municipality of Vienna wants to promote firstly, data security and transparency, secondly the early fostering of IT skills, thirdly the usage of IT capabilities to save time and resources and last but not least, to improve digital mobility. Mag. Schuhböck mentioned that subject matter data security has to be treated as a “holy cow” as the citizens have a keen interest into the protection of their privacy. With this mantra in mind Vienna launched 2015 as the sixth lighthouse project “Digital City Vienna” within the field of action “I like it – Digital City Vienna” a marketing campaign together with leading IT companies based in Vienna. This draw immense public attention on the “Digital Agenda” and highlighted how crucial the IT industry is for this city. The added value created by these companies is four times higher than the one generated by tourism. What led to a successful project execution was the uncompromising inclusion of all relevant stakeholders – and as a best practice – the involvement of Vienna’s citizens in the decision making process.

The second subject was the pioneer role of Vienna’s government with the introduction of Open Government Data (OGD). Dipl. Ing. Lutz explained that OGD fosters the data usage which is collected by various individuals, institutions or companies. She mentioned that “data is the oil of the 21 century”. In order to prevent that difficultly gathered data becomes useless ending on data graveyards, the data is collected centrally and made available for others to use. Since the government does not have the capacities and resources to extract and analyze the data, entrepreneurs, scientists and companies are encouraged to develop based on the provided data various applications to make citizens life’s easier.

After the introduction to these two topics we had fruitful discussions followed by a soon ending of the first visit.

After lunch we visited the “Bundeskanzleramt” where we got an introduction into Government 4.0 by Mag. Christian Rupp who is the speaker of the “Platform Digital Austria”. The Government 4.0 claims to be efficient, digital and smart. 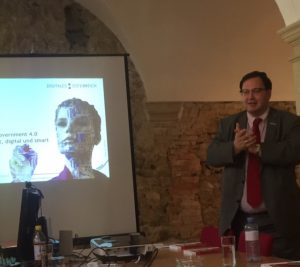 He emphasized that this process “is a journey and not a destination” containing various aspects needing particular attention. The four main components are legal landscape, political will, customer needs and technical feasibility. An integral part of the Government 4.0 is the e-citizen card which acts as a digital identification instrument enabling a secure one-stop-shop for all ministerial matters and services. The card is not mandatory for every citizen but rather optional to enroll. Approximately 1 Million out of 8.6 Million Austrian citizens have registered so far. The technical and legal aspects coming along with this e-card where explained by two specialists. Dr. Bernhard Karning introduced us to the legal aspects also indicated by the EU and Dr. Alexander Banfield-Mumb demonstrated the technological parts and functionality of the e-card with a particular focus on cybersecurity. 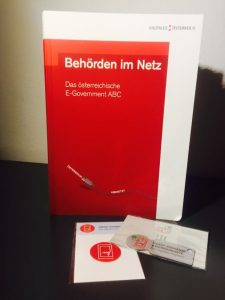 All in all, we had a very pleasant, educating and interesting day in Vienna and are very grateful for the time all these experts have taken and for the guide on e-government provided.